Skip to main content
Starting with the Dwight D. Eisenhower (CVN-69) and Harry S. Truman (CVN-75) Carrier Strike Groups, every deploying ship will have a chaplain on board. Whatever a sailor’s definition of spiritual health, there will be a command chaplain who will listen and help them through mental health challenges.
U.S. Navy (Indra Beaufort)

Moving Out on Mental Health

I left the Navy seven years ago—about six months earlier than planned—partly because of the accumulated stress of multiple back-to-back sea tours inflicted on me and my family. I worked in industry for a few years and, last year, having studied human factors for six years at the doctorate level, I decided to rejoin government service and address some of the stress about which my wife Gudrun has written.

What I found on my return was a service that feels like it is under more stress and stretched thinner than it was when I retired. Navy manning has increased, but gaps and shortages, extended maintenance periods, and record-setting deployments—as well as the COVID-19 pandemic—are affecting the health of the force and their families. While resources have always existed to assist sailors dealing with stress and fatigue, access while on sea duty is challenging.

Chaplains on deck. Gone are the days when Navy chaplains only embarked a few larger commands. Starting with the Dwight D. Eisenhower (CVN-69) and Harry S. Truman (CVN-75) Carrier Strike Groups, every deploying ship will have a chaplain on board. They may be temporarily assigned now, but the long-term plan is a chaplain on every ship. Whatever a sailor’s definition of spiritual health, there will be a command chaplain who will listen. Making this long-term commitment allows the Navy to build the trust and cohesion that results from working and fighting together across the entire operations, maintenance, and training continuum—shared experiences that build relationships is key to maintaining readiness. To quote the commanding officer of USS San Jacinto (CG-56), Captain Eddie Crossman, after her record-setting deployment:

My chaplain was critical to maintaining not only my crew’s religious needs, but also their mental health. He kept me in the know on the pulse of the crew’s mental health, helping me see what stressed them as the deployment dragged on, allowing me to adjust the schedule and operations to make sure we got them the right outlets at the right time, keeping them strong. I attribute the fact that we went eight months straight at sea with not a single suicidal ideation . . . to Chaps. His creation of a Force Preservation Council, where we methodically looked at every single sailor’s individual stressors, was critical. Because of Chaps we were able to recognize stressors in a number of sailors and get them help early, before the stressors overtook them.

Deployment resiliency counselors. These are licensed civilian counselors who deploy on board aircraft carriers and large-deck amphibious ships to provide nonmedical counseling and support to the crew, in an effort to reduce unplanned losses caused by mental health issues. Thanks to a new Memorandum of Agreement, they now serve the entire strike group, not just the crew of the flagship, and their numbers are growing. To quote the USS Bataan (LHD-5) commanding officer, Captain Bryan Carmichael, the deployment resiliency counselor “has been an outstanding resource for the crew, leadership and embarked Marines (Marines don't have a DRC, so her work load doubled on deployment!).”

Behavioral health technicians. Specially trained hospital corpsmen, these individuals attend an additional “C” school to focus on mental health. After a successful pilot supporting the USS Vella Gulf (CG-72) and Truxtun (DDG-103), the effort to have a behavioral health technician on board every deploying Atlantic carrier strike group or amphibious readiness group ship is expanding. Data from these efforts will help inform and potentially justify having a mental health professional assigned to every deployed vessel. The critical need for additional support at the deckplates level is recognized and the behavioral health technician, who is able to perform psychoeducation (education on coping skills, reframing thoughts, and sleep hygiene), may be the appropriate level of support for some ships.

Enhanced operational stress control (eOSC). This new program was piloted using virtual training for the USS Gettysburg (CG-64) and Vella Gulf (CG-72) in September and will expand to a fleetwide program early next year. A three-day virtual training session for the Command Resiliency Team, eOSC leverages operational stress control resources to provide command leaders with the tools to help their sailors deal with and mitigate various levels of stress. While initially skeptical, I took the class and it was fantastic. It needs time to mature, and as the executive officer of the Vella Gulf shared, “You have to be careful to pick the right person—we can’t expect anyone to become a mental health expert overnight.” I am sure feedback and ideas for improvement will be welcomed. Look for more on this topic in the coming months. 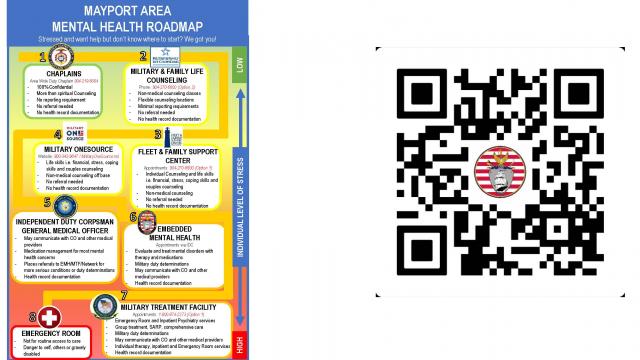 Embedded mental health professionals. Moving mental health professionals to the waterfront makes them more accessible to the sailors on board ships. Over the past year, the number of mental health professionals at every Medical Readiness Division (MRD) has increased. Every ship is now assigned an MRD-based active-duty psychiatrist, psychologist, mental health nurse practitioner, or social worker to work with the triad (captain, executive officer, and command master chief) and medical staff to address the needs of the ship. Early feedback is very positive and this program is expanding every month. One destroyer captain commented: “The new process at MRD helped streamline the process for the waterfront. The amount of time it takes our sailors to get into appointments at the hospital could sometimes take greater than a month. Having the mental health team at MRD significantly lowers that time.”

TeleHealth. Commands in Rota and Norfolk are able to request nonroutine evaluations for sailors if the medical provider is unsure of the next dispositional action, e.g. safe for the sailor to remain on board until pulling into the next port/return to homeport versus medical evacuation. Since implementing a TeleHealth pilot in Rota in July 2019, there has been a 91 percent reduction in mental health-related medical evacuations.

Navy families. When Navy families are stressed, sailors feel it. When sailors are stressed, their families feel it. Ensuring our families have the support they need, particularly in today’s COVID environment, is important. Working with OPNAV N17, we are generating a survey to get feedback to help to better understand family needs—and act on them. Expect the survey to be released next month, targeting families on both coasts with sailors deploying in 2021.

“Check up from the Neck Up.” To reduce the stigma of seeking help and recognize that commanding officers often have little outlet for the stresses of a long fleet-up tour, Commander, Surface Force Atlantic is leveraging a process from the special warfare community to evaluate its leaders. The goal is to provide commanding officers an opportunity to safely share their occupational and social stressors, receive education on their individual strengths and weaknesses, and develop awareness of how to remain balanced. Implementation starts next month with triads from the Eisenhower Carrier Strike Group, and the Surface Force Atlantic commander recently completed his evaluation. It is time to move past mental health as a stigma and view mental health as a readiness enabler.

Are these easy fixes? No. Are they forward progress? Yes. Help is there. More is coming. In the meantime, leaders must remember the most important tool to deal with these challenges is one that requires no new resources: listening. Leaders take time to ask their people how they are doing, and they sincerely mean it when they ask. They stop what they are doing and listen.

Fighting the stigma of mental health is a marathon, and our Navy as an organization is still learning.

Captain John Cordle, U.S. Navy (Retired), retired from the Navy in 2013 after 30 years of service. He commanded the USS Oscar Austin (DDG-79) and USS San Jacinto (CG-56) and received the Navy League’s Captain John Paul Jones Award for Inspirational Leadership in 2010. He was Proceedings 2018 Author of the Year.