Going to War With China? Dust Off Corbett!

To win future battles in the Pacific, the Navy must let go of the concept of sea control and embrace a strategy of sea denial.
By Daniel E. Ward
Proceedings
Vol. 146/1/1,403
Featured Article
View Issue
Comments

China is working to establish regional hegemony in the South China Sea, with aspirations for broader influence and control of the Pacific Ocean. While China is a formidable foe, its weaknesses can be exploited using lessons from British naval scholar Sir Julian Corbett. To do so, however, the United States must disengage itself from the allure of Alfred Thayer Mahan, as his principles of force concentration and the decisive battle would work to China’s favor. Corbett’s concepts of blockade, “cruisers,” and attacks on trade are more sensible options for containing and strangling China in a possible war.

U.S. fleet composition and a culture centered on carrier strike groups (CSGs) reveal that fleet engagement, in a Mahanian concept of sea control through defeat of the enemy fleet, still drives U.S. naval strategy. However, the situation China has created in the South China Sea negates many of the strengths of a CSG and its conceptual deployment strategy.

An approach combining patrol forces (Corbett’s “cruiser” concept) and overt control of lines of communication, such as trade routes, shipping lanes, and maritime chokepoints, is of much greater significance in the 21st century against a regional-level peer competitor. China’s layered defense, which includes antiship missiles, localized submarine forces, and aircraft, in conjunction with surface naval assets, makes incursions within the strike range of a CSG possibly unfeasible. How then is one to conduct offensive operations? Operations should be proactive and offensive, but the notion of a CSG sailing into battle as an initial option should be discarded.

China is essentially boxed into the South China Sea. Its expansion into and creation of islands in the South China Sea, and defensive measures to enforce its nine-dash line claim, have created a nonpermissive area for foreign shipping and naval operations. However, this area essentially is a fortified lake—albeit of great size—that China can defend but from which it cannot project power if the United States takes action to prevent such measures. U.S. naval forces operating beyond the South China Sea—past the boundaries of Malaysia, Indonesia, and the Philippines—can both contain Chinese naval power and cut off supply routes and aid. 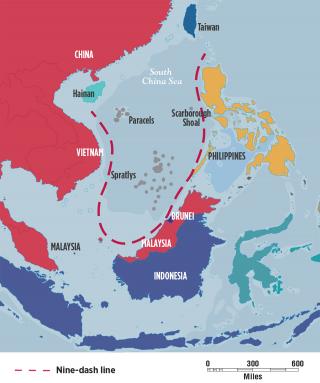 China’s strategy focuses on both the ability to “deny foreign forces a hostile approach to its coasts, as well as developing a modern blue water navy to protect their expanding overseas port access and bases.”1 One analyst notes that “China’s leading advocates of the theories of . . . Alfred Thayer Mahan . . . subscribe to one of Mahan’s principal ideas: a truly powerful nation must have thriving international trade, a merchant fleet to carry these goods and a strong navy to protect its sea lanes.”2 China arguably has succeeded in establishing a thriving international trade, but it still lacks the naval forces to secure such trade, and this will be a critical weakness in wartime.

China has focused on creating a nonpermissive area for opponents within the South China Sea—a potential “no-go” zone during hostilities. A 2018 Proceedings article argued that China’s military has:

devised a Maoist “active defense” strategy—rebranded “offshore waters defense” in recent years—that alloys . . . sea- and land-based elements of sea power into a single sharp weapon to defend Fortress China and offshore waters against the United States and its allies.3

This design employs advanced ballistic and cruise missiles, with designs for antiship employment, forward basing on various islands to include aircraft and missile defense, and a growing network of subsurface assets and traditional naval patrols. The United States must evaluate risk in potential shooting scenarios, many of which favor China in close engagement because of its ability to inflict damage while falling back on local support. Such damage would not necessarily cripple the United States, but it could affect overall global concerns and task military planners with decisions over acceptable costs—an idea the U.S. Navy has not had to consider since World War II.

A congressional overview of the Chinese military in 2018 notes that most observers believe:

China wants its military to be capable of acting as an antiaccess/area-denial (A2/AD) force—a force that can deter U.S. intervention in a conflict in China’s near-seas region . . . or failing that, delay the arrival or reduce the effectiveness of intervening U.S. forces.4

The United States therefore must not succumb to the Mahanian ideal of direct engagement in the close waters of the South China Sea with CSGs. Just as battleships gave way to carriers in World War II, so must the flattops give way to undersea, littoral, and light patrol forces, and take a position as long-range support. Corbett provides a template that effectively uses this disposition of forces.

China’s booming economy within the interconnected global community is an area that does not fall under its localized A2/AD umbrella, making it susceptible to attack and disruption. Recognizing this, it is slowly working to expand its global presence “to protect its growing foreign business, advance its overseas political interests, as well as to ensure the safety of resources flowing back to China.”5 This effort includes a naval base in Djibouti, logistics facilities in Oman, Sudan, and Saudi Arabia, and ships deployed to areas around the Gulf of Aden and Somalia. However, the U.S. fleet can counter China by adroit placement and disposition of forces, using the basic tenets of naval warfare provided by Corbett. In a decisive battle, the Chinese naval assets at these outposts would be targets for engagement.

In his Principles of Maritime Strategy, Corbett teaches that “the object of naval warfare must always be directly or indirectly either to secure the command of the sea or to prevent the enemy from securing it.”6 The key element is how to define command of the sea, which in turn lays the foundation for countering China. According to Corbett, command of the sea “means nothing but the control of maritime communications, whether for commercial or military purposes.”7 Control of communications can place a chokehold on an opponent and be the key to blockading global shipping routes and hubs of import and export hubs.

Corbett continues by stating “on [the] cruiser depends our exercise of control; on the battle fleet depends the security of control.”8 The Navy must employ his cruiser concept to control maritime communications. Individual ships or small task forces can occupy shipping lanes and chokepoints to control commercial traffic. Inspection and enforcement, such as applied by Coast Guard detachments on Navy platforms in areas of the Western Hemisphere and Middle East, serve as a template for limiting Chinese trade in a less kinetic manner. Within the confines and approaches to the South China Sea, submarines, strike aircraft, and coastal patrols, married with local host-nation forces, could stop, disrupt, and, if necessary, attack Chinese merchant shipping. This concept essentially becomes a commercial blockade, defined by Corbett as “a method of exercising command” and is geared toward stopping maritime trade.9

Furthermore, blockade can be close or open, determined by the distance and whether the aim is to stop an enemy from putting to sea or to force engagement, respectively. A close blockade is impracticable and provides exposure to Chinese land-based defense and little backstop if the blockade is avoided. An open blockade, however, particularly in an era of long-range missile warfare, gives the blockading force room to adjust and maneuver, as well as to observe and respond to enemy sorties. This again falls in line with Corbett’s lessons for attack on commerce as taking “one of two forms”—terminal, a focus on departure and destination hubs; or “pelagic,” a focus toward shipping routes.10 Focus can occur toward departure points instead of terminal ends. Routes can be targeted, as well as trade chokepoints, though this may prove challenging in areas with competing, legitimate shipping traffic of neutral nations. Deployment of appropriate force structures, such as boarding and inspection for areas blockaded at a distance and using kinetic forces in areas closer to Chinese defense structures, could address issues with neutral shipping.

The Navy has employed operations opposing maritime trade, illicit or otherwise, since World War II; Operation Market Time was used to choke off supplies to the Viet Cong during the Vietnam War and contemporary sanctions against Iraq and Iran have denied trade opportunities. However, these operations do not rise to the scale of opposition the United States may face from China. A joint posture of cruiser operations with blockade, enforced violently at approaches to and within the South China Sea, paired with an inspection-and-seizure approach in other shipping lanes would be needed.

If the United States were forced into an engagement in the South China Sea, it “would face extreme difficulties in abandoning their posts worldwide to focus on the Pacific, whereas China would leverage every possible dimension of warfare . . . to assert their dominance in their immediate region.”11 The Navy should avoid pitched battles on China’s home turf. Chinese planners are not ignorant of their own weaknesses, and “PLA [People’s Liberation Army] forces will not try to protect a fixed defensive perimeter, and they will not offer decisive battle far out in the Pacific Ocean”—but they will yield “sea space while launching piecemeal attacks to cut the U.S. fleet down to size in preparation for a naval action somewhere within the crumple zone.”12 Therefore, correct employment and placement of assets are critical.

Submarines, strike aircraft, and coastal patrols can kinetically disrupt the South China Sea and its approaches and attack when conditions are favorable. Patrolling assets in other maritime areas can prowl shipping lanes and chokepoints to blockade and monitor outlying Chinese posts or deployed assets. Such an approach, according to Naval War College professor James Holmes:

would leverage China’s intense dependence on foreign trade . . . to debilitate the Chinese state. A carefully organized blockade could thus serve as a powerful instrument of American military power that contributes to overcoming the pressing challenge of China’s formidable antiaccess and area denial (A2/AD) system.13

Larger configurations, such as CSGs, can serve as a backstop to pounce on targets of opportunity and be a force multiplier at regional levels.

In a shooting war, China could afford to adopt a defensive posture and allow U.S. forces to wither themselves on Chinese defenses. China wins any engagement that bleeds U.S. assets, as Chinese forces can fall back to their own territory and enjoy localized support. Therefore, the U.S. Navy must force Chinese ships to come out from their defensive perimeter. A Corbett-style blockade based on supporting perimeters with both kinetic and nonkinetic parameters at incremental distances from the South China Sea will force them to sortie or die a slow death. And if the Chinese Navy moves out of its protected zone, globally positioned U.S. forces would be able to systematically defeat these forces.

This progressive approach, using submarines, long-range air strikes, and coastal patrols in tight, kinetic perimeters, reinforced by outer inspection-and-seizure forces, would squeeze the Chinese into abandoning their A2/AD area of operations or risk cessation of vital trade and eventual collapse. In essence, to prepare for naval warfare against China, U.S. strategists must dust off their Corbett.

5. Norval, “The Return of Mahan, Mackinder, and Spykman.”

Mr. Ward is a former Coast Guard officer. His work experience includes maritime and riverine operations, protective services, and security operations, as well as criminal investigations. He spent several years in Latin America and the Middle East and has extensive experience training indigenous forces. He holds a bachelor’s degree in civil engineering from the U.S. Coast Guard Academy and a master’s in defense and strategic studies from the University of Texas at El Paso.