Get Ready for the Next RMA at Sea

Every few decades, technology changes the complexion of warfare at sea. There often is a gestation period; for example, even though specialized ships for carrying combat aircraft made their debut in the 1920s, it took another two decades for them to transform into capable aircraft carriers, potent enough to displace the battleship as the face of combat power at sea. We are now on the threshold of another period of far-reaching change in the way we do battle at sea, driven by battlefield transparency and long-range strike. Individually, each of these may bring about an evolutionary change, but in combination, they have the ability to revolutionize warfare at sea.

Transparency in the maritime domain has been improving for several decades, but the big-ticket changes currently under way are in the realms of space and persistent flight. Traditional electro-optical satellites are fitted with large multispectral cameras and can tilt and yaw in accordance with uplinked instructions to point at that part of the earth that needs to be imaged. Mass and momentum determine the agility of the satellites in pointing from one spot to the next as they orbit, which, in turn, determines the image interval. These platforms are expensive and require significant ground-based infrastructure to operate effectively. As a consequence of their size, launch costs tend to be high.

There is, however, a new approach to satellite-based surveillance using nanosatellites. To keep costs down, these satellites are made largely from commercial cell phone parts.1 In addition, rather than maneuvering in accordance with uplinked instructions, they are designed for broad area monitoring, constantly nadir-pointing and acting as line scanners for the surface of the earth. Launch costs are low and getting lower.

A pioneer of this approach is the small San Francisco–based company Planet, formerly known as Planet Labs. It is launching the Dove satellite in “flocks.” Per its website, Planet currently has more than 150 satellites in orbit and can image the entire landmass once a day.2 (Cameras over the ocean currently are turned off as there are few takers for such data). The Dove weighs just 4.2 kg, but it packs a significant capability, with an average image resolution of 3.7 meters.3 While this may be insufficient for specific terrestrial requirements, at sea it is adequate for locating and identifying a warship or formation.

Planet came into the limelight when it released a photograph of the Chinese carrier Liaoning in April 2018.4 It does not require the services of an imagery analyst to identify the Liaoning in the picture. Weather and daylight permitting, this small firm developed the means to provide a daily update of every reasonably sized ship at sea, with venture capital funding of under $200 million.5 If its space segment were scaled by a factor of four, an update of all contacts across all oceans every five or six hours would not be unthinkable.

Distributed surveillance capabilities of this type have other advantages, as well. They are difficult to disrupt and are practically immune to antisatellite weapons. They can be rapidly replenished and augmented. Their planned service life being short, they are replaced periodically and therefore do not suffer from obsolescence issues.

Of course, if one is scanning the globe several times a day, it is not feasible to have human eyes identify all contacts imaged, even within one’s primary areas of interest. An artificial intelligence–based solution is imperative. Planet already is moving in this direction. Considering technology already exists that can scan and identify human faces by the billions, it likely would not be difficult to develop a system to identify an aircraft carrier or other large combatant at sea.

The days of positional ambiguity at sea are fast drawing to a close. For maritime operators, positional disclosure of own and opposing surface forces must be a universal planning presumption.

The second big change concerns long-range strike. Long-range strike is not new. Tomahawk missiles have had the ability to hit targets ashore at ranges greater than 1,000 nautical miles (nm) for three decades, and the Prompt Global Strike program, aimed at delivering a precision-guided conventional weapon anywhere on the globe within one hour, has been in the news for several years.6 However, these weapons primarily have been directed against static shore targets. The challenges involved in launching ordnance from considerable range to hit a moving target at sea are complex, and it is in this sphere that big changes are under way.

One approach to this problem has been to upscale the cruise missile, be it in terms of speed, endurance, payload, guidance, antijamming, etc. Several of today’s anti-ship cruise missiles are supersonic, and ranges in excess of 500 nm are not uncommon. Existing land-attack missiles also are being adapted for antiship strike, as is the case with the Maritime Strike Tomahawk.7

The other methodology that increasingly is finding favor is to use missiles with a ballistic trajectory. China’s DF-21D antiship ballistic missile (ASBM) has been in the spotlight for several years, and now the longer range  DF-26 has joined its ranks. Notionally, this has pushed China’s threat envelope to 2,500 nm. Once the technology necessary to get a ballistic warhead to strike a moving target at sea has been mastered, it can be placed inside the nose cone of any rocket, including the DF-41, which has a range in excess of 6,500 nm.8

The United States has correctly identified the ASBM as a system of systems, successful exploitation of which requires several parts to come together. In response, it has put together the Joint Concept for Access and Maneuver in the Global Commons, which aims to disrupt at least one element of the kill chain to degrade ASBM effectiveness.9 The most vulnerable link in the chain is surveillance—which relies heavily on expensive and targetable assets such as shore-based aircraft and over-the-horizon radar—but once a distributed satellite surveillance network becomes fully operational, its dispersed nature will make it difficult to disrupt. With regard to the vectors themselves, a new generation of ship-launched ASBMs would add redundancy, making it nearly impossible to take down the system in its entirety.

Shipborne ballistic missile defense (BMD) systems are another important cog in the defensive architecture of maritime forces, but here, too, fresh developments are afoot to degrade the effectiveness of such defenses. Designs based on hypersonic glide vehicles and wave riders could give the warhead an unprecedented degree of maneuverability. Vehicles in this family have been tested to varying degrees of success. It will not be long before such weapons have adequate maturity to hit mobile targets at sea, even in the face of BMD systems.

The Looming RMA at Sea

Battlefield transparency coupled with long-range strike will make ships targetable anywhere, any time. Ships will be under constant threat, whether at their piers or deployed mid-ocean. While it is difficult to predict all the consequences of such capabilities, they include:

• Dispersion will trump concentration. Even with enhanced transparency, it is considerably more difficult to identify and target widely dispersed ships than concentrated formations. If long-range strike weapons allow dispersed forces to concentrate their firepower on targets, the motivation for keeping units in close proximity diminishes. Mutual support would remain a consideration, but the advantages also would diminish as single kill vehicles give way to multiple independently targetable munitions released from a single ballistic warhead. The preference therefore is likely to shift to dispersed operations.

• Big decks will be vulnerable. The large decks on aircraft carriers and amphibious assault vessels are easy to identify at resolutions of 3 to 5 meters, increasing the probability of their being identified and struck. Given their tremendous value in terms of cost, manpower, and embarked assets, as well as the outsize impact their loss would have on morale and war waging potential, they are likely to attract a bevy of long-range strike weapons. Keeping them safe would require large investments in conventional and BMD capabilities. From a cost-benefit point of view, nations would need to examine if they are worth the investment.

• Submarines will deploy differently. In submarine operations, detection and identification are the difficult points in the kill chain. Targeting is substantially easier. Information from space-based surveillance has the potential to replace a fuzzy sonar picture with one akin to a ship operating a radar of unlimited range. It would change the deployment philosophy for these hunters of the deep. Gone would be the bias of operating at choke points or within the radius of maritime reconnaissance aircraft, as reliance on air–sub cooperation would give way to space–sub cooperation. Mid-ocean deployments, even for conventional submarines, would be the preferred option. As the time lag for information from space-based sensors is reduced, there might come a time when the requirement to detect targets using organic sensors could be dispensed with and embarked weapons could be exploited to their full combat range.

• The first mover will hold the advantage.  A nation with robust battlefield transparency and long-range strike capabilities will be able to inflict enormous damage against an adversary in the early hours of a conflict. If one has the ability to take out a quarter of the combat potential of an enemy through a preemptive attack, the temptation to do so will be defining. Pressure to shoot first could be destabilizing as belligerents vie for the first mover advantage. Under such conditions, planners would face a new set of dilemmas. Realizing that assets are vulnerable to attack, possibly even more so when in harbor, would increase the temptation to put them to sea. However, if control of the timeline of conflict rests with the opposition, a hasty decision could have other negative consequences. Suffice to say that as these capabilities are fielded, a nation’s maritime strategy and war plans would have to be revisited.

As new capabilities in battlefield transparency and long-range strike are acquired by navies of the world, the impact on the conduct of warfare at sea will be monumental. Given that some of these capabilities already are being fielded, the window for developing counterstrategies is fast closing. Mitigation strategies, be they revisions to force structure or organizational changes and fresh operating philosophies, must be rapidly devised and implemented. The choice lies between implementing changes with dexterity or risking being hopelessly unprepared for the next battle at sea.

7. John Keller, “Raytheon Moves Ahead with New Guidance Sensor and Processor for Anti-Ship Tomahawk Missile,” Military and Aerospace Electronics, 18 May 2018. 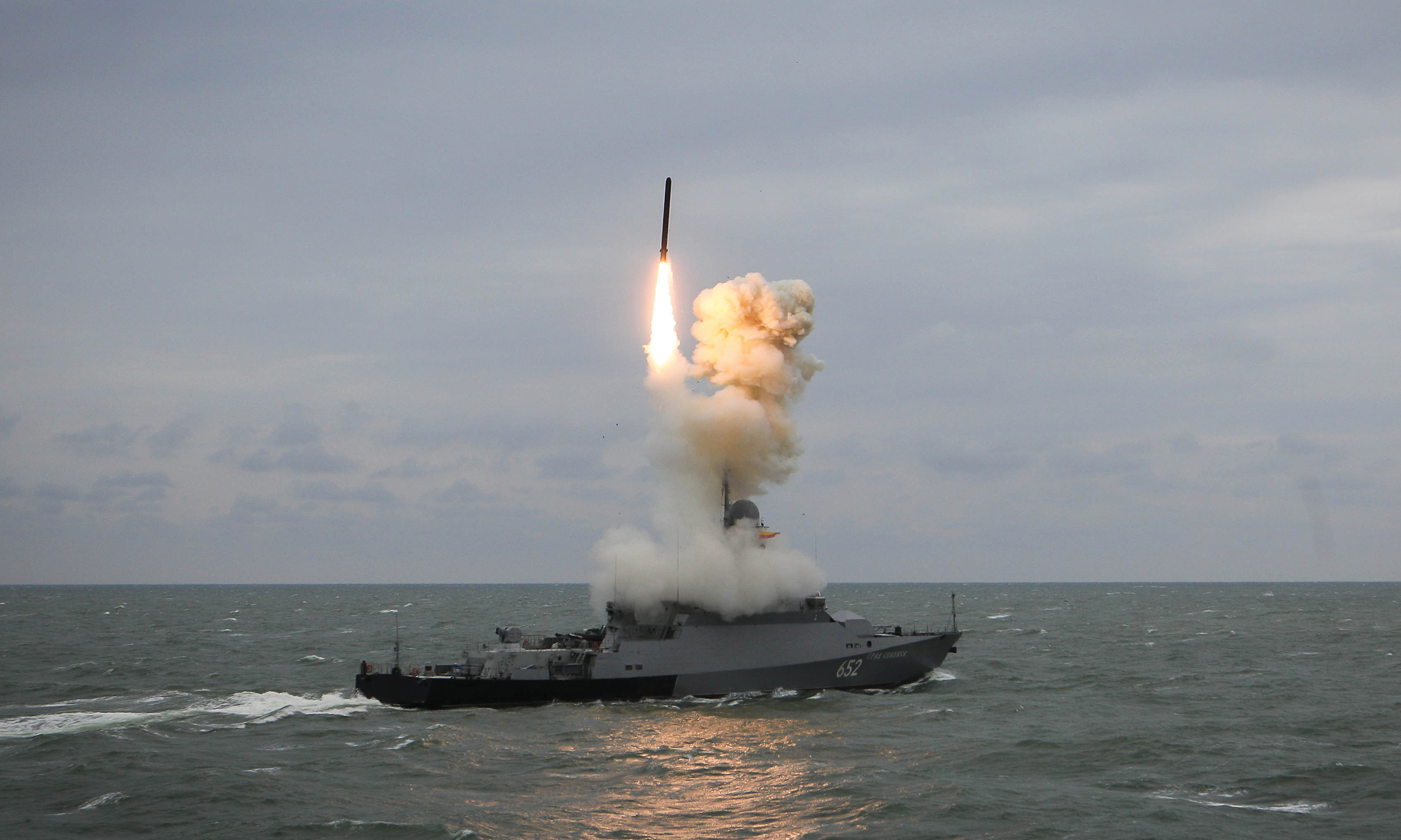 Rear Admiral Monty Khanna is a graduate of the Defence Services Staff College, Wellington, India, and the U.S. Naval War College. He has served as the Indian naval attaché in Washington, DC; Assistant Chief of Naval Staff for Foreign Cooperation and Intelligence; Commandant of the Indian Naval War College at Goa; and chief instructor (Navy) of the Defence Services Staff College, from which he recently retired.