Skip to main content
A UH-1Y Venom helicopter assigned to the 11th Marine Expeditionary Unit takes off from the amphibious assault ship USS Boxer (LHD-4) during a transit of the Strait of Hormuz. A much more integrated naval organizational design is now required to maximize the strengths of the Navy and Marine Corps.
U.S. Marine Corps (Dalton Swanbeck)

Through its naval dominance, the United States has guaranteed nearly seven decades of open international maritime commerce and global prosperity. Today, an agile and powerful Marine Corps is needed to defend U.S. maritime interests and deter potential adversaries. What is not needed is an anachronistic, flawed organizational design replete with unnecessary administrative overhead inhibiting operational effectiveness. Given the geopolitical and fiscal challenges awaiting the nation, it is time for a difficult conversation about reorganizing the U.S. naval service.

Using the “three horizons” forecasting technique, the following thought experiment shows how a strategic vision for true naval integration—far beyond anything currently being proposed that could, for example, foresee a Marine Corps general as Chief of Naval Operations someday—and greater operational capability can be achieved. For many, imagining a future that is drastically different from today and also violates many heretofore sacrosanct beliefs about service culture is impossible, or even offensive, but this type of thinking is precisely what is needed to make profound change.

The force structure of the modern Marine Corps is based not on operational functionality or mission effectiveness, but on institutional paranoia, political influence, and the enduring public sentiment created by Marines raising the flag at Iwo Jima. Today’s Marine Corps is largely a response to Army-led efforts to absorb the service after World War II, even though, ironically, the perceived poor state of Army readiness, particularly during the draft era, often has been the central argument for keeping the Marine Corps. But while Marines have performed exceptionally in augmenting the Army when required, the Corps is not a second land army and should not be designed as one.

Following the end of the Cold War, the Marine Corps defended itself against “peace dividend” efforts to downsize the military by mounting an effective quasi-propaganda campaign aimed at both the public and Capitol Hill. Contrary to the images promoted by the campaign, however, only a small percentage of Marines serve in the infantry branch, the Corps’ main expeditionary element. In 2010, for example, at the height of the surge force to support operations in Iraq and Afghanistan, there were fewer than 40,000 infantry Marines in an active-duty force of more than 202,000. Such a low “tooth-to-tail” ratio is hard for any defense analyst to defend. Redesigning the Department of the Navy’s organizational structure could eliminate a significant number of headquarters and support billets, giving the combat arms branches more capability without increasing overall Marine Corps manpower.

The “three horizons” forecasting technique is embedded in academic literature and is commonly used by the RAND Corporation and many top consulting firms. It helps organizations create a strategic vision of their future environment and identify mechanisms to help shape it. The process begins by examining the first horizon––the indicators of the future that are apparent today. Perhaps counterintuitively, the next step is to focus on the third horizon and envision the future an organization wants. Finally, horizons one and three collide at horizon two, where policy adjustments, investments, and divestments achieve the desired end state.

China’s rise as a regional power and its assertiveness in the maritime environment over the past two decades suggest it will be the primary security challenge to the United States for the remainder of the century. The U.S. naval services must organize themselves to best counter it. The Marine Corps’ leaders appear to recognize that operations in Iraq and Afghanistan are fundamentally different from great power competition with China. To that end, every Commandant since General James Conway in the late 2000s has called for the Marine Corps to return to its naval roots and for greater integration with the Navy.

The issue was so important to then–Commandant Robert Neller and then–Chief of Naval Operations John Richardson that, in May 2019, they issued a rare “8-star” internal memorandum directing their services to press forward toward greater integration.1 Former Secretary of the Navy Richard V. Spencer, a Marine Corps veteran, also made integration a top priority for the Department of the Navy.2 Horizon one clearly indicates that the operational challenges of the future will be different from those of the past, and the naval service is not effectively organized to meet them.

What would a truly integrated naval force look like? Here, the relationship between the Royal Navy and Royal Marines can serve as a guide. An integrated naval force should have a single headquarters to provide common fiscal, acquisition, and technology policy and support to the operating forces. There must be a single naval strategy supported by a common naval doctrine. To lead an integrated naval service executing a naval strategy, the Chief of Naval Operations, whether a Navy admiral or a Marine Corps general, will need to have diverse naval experience.

Industrial-age military forces were built on the principles of uniformity and rigid structure to control masses of troops. That is not a priority in a modern organizational design, where standardization at scale is viewed as counterproductive; look at the vastly different physical fitness requirements for a cyber operator and an infantryman, for example. Each warfare community should have greater autonomy in equipping, establishing policies, selecting and managing personnel, and shaping its culture for its specific mission. Customization, not uniformity, is the most important societal trend the naval force of the future must adopt. The organization of an integrated naval force could resemble the arrangement depicted in Figure 1. 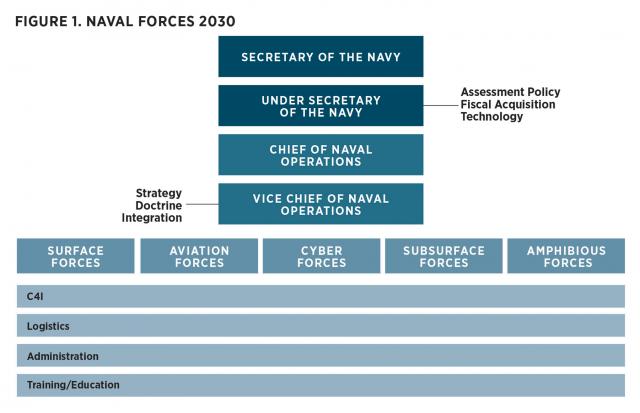 The Commandant of the Marine Corps, with added responsibility for overseeing and managing naval special warfare, riverine forces, and inshore supporting capabilities, would be the leader of the naval amphibious forces component. This structure would give the Marine Corps significantly more firepower in the maritime domain with far less administrative tail.

Operational support to the joint force would occur through naval commands, not the redundant, service-centric model developed three decades ago. A single “Naval Forces Command” would coordinate theater naval forces and planning requirements for the geographic combatant commanders. There no longer would be separate Marine Corps and Navy component commands.

With an integrated organization, hundreds of naval officer staff billets could be reallocated for additional education opportunities at war colleges and civilian universities. No officer joins the naval service for a staff assignment, and any new design must reflect this reality by eliminating those staff military billets better suited to qualified civilian personnel.

Tactically, the primary organization for amphibious operations should be a naval expeditionary force—a Marine air-ground task force with a Navy element. This
single-service construct would permit greater integration of capabilities and organizations as the operational situation demands.

Horizon two is the most important and turbulent part of this model. It is where the successful integration of a naval force collides with the inertia of the status quo. A redesign of such scale and complexity would take years to accomplish, but anticipating the bureaucratic roadblocks and political landmines will help manage the challenge. Some initial considerations must occur during horizon two:

Hill engagement: Congress must understand that the organization it authorized 70 years ago is not optimized for the future, and it will have to take an active role in the redesign process. Just as it mandated the Marine Corps’ status as a separate service and required the maintenance of three Marine expeditionary forces, Congress can determine and protect the size and composition of the Marine Corps the nation will need in 2030. Never again on Capitol Hill, in the Pentagon, or anywhere else should there be serious talk about eliminating the Marine Corps. On the other hand, an intelligent discussion about a new naval force design to face future threats is a conversation worth having.

Leadership: All Navy and Marine Corps officers are naval in character. They begin their careers with a common education and are steeped in the same culture and traditions. That foundation must be strengthened over the course of their careers with more opportunities to operate side by side on staffs, in exercises and simulations, and during naval operations. In fact, the entire force structure of both services must be evaluated to determine where common functions exist. For example, a Marine artillery officer could lead the weapons department on a littoral combat ship or destroyer. It is easy to imagine a scenario in which Marines at sea conduct fire-support missions like those in Vietnam. Identifying similar opportunities is critical to creating officers who think in naval terms, not just in Navy or Marine Corps terms. In horizon two, a clear path must be created for a major or lieutenant colonel today to compete for the position of Chief of Naval Operations at horizon three.

Processes: As anyone who has served in the Department of the Navy Secretariat can attest, administering two naval services is grossly inefficient. The statutory authority granted to the Secretary of the Navy permits him to organize the department as he sees fit, but the deeply flawed Goldwater-Nichols Defense Reorganization Act of 1986 endowed the service chiefs with specific responsibilities that prevent efficient Department of the Navy consolidation. Nevertheless, the management enterprise, business systems, and administrative procedures of the two services must be integrated to the maximum extent allowed by law and regulation. The cost of doing this will be significant, but as systems and policies are updated or replaced, they need to be merged across the naval services. Building an integrated and efficient management structure in horizon two will enable effective naval operations in horizon three.

Doctrine: Given the challenges facing the nation, it is more important than ever that the naval service gets naval doctrine right. It drives investments, planning, manning, and every facet of tactical operations; it is the canon of operational preparedness. A single integrated naval doctrine will provide a guide for the operational forces’ defense of the national interest. Furthermore, it will give the best planners the opportunity to build effective operational concepts without having to defend service equities—currently a burden that significantly constrains original and critical thought.

Culture: Protecting Marine Corps culture remains a primary consideration within this framework. The service’s magnificent history, traditions, standards, and warfighting ethos contribute enormously to its high state of readiness and legendary operational performance. There is, however, no single distinct culture in either the Marine Corps or the Navy. An institution as large and complex as the naval service has multiple cultures, each worth defending. While acknowledging this, the Commandant and the service’s other leaders must retain the authority to oversee and nurture the Marine Corps’ rich traditions.

The United States needs an agile and powerful Marine Corps. The nation can and must have a fully integrated naval force to counter the many threats waiting over the horizon. This proposal is not intended to reduce operational capabilities; eliminating unnecessary bureaucracy will in fact let the organization focus greater resources and intellectual capacity on developing and expanding capabilities. Given the challenges emerging in the Indo-Pacific theater, the Marine Corps must prepare for a full range of naval operations in the littorals, underwater, and ashore. The time for an organizational design to maximize the inherent strengths of the Navy and Marine Corps is now.

The Nation Needs a Real Plan to Grow the Navy

By Congressman Rob Wittman (R-VA)
The Department of the Navy needs a serious, strategy-driven shipbuilding plan; and Congress must provide consistent funding to turn that plan into real ships.