Skip to main content
The threat of privateers to China’s maritime economy could strengthen deterrence and possibly prevent a war.
New York Times

For a discussion of the law regarding letters of marque, see: U.S. Privateering Is Legal

Naval strategists are struggling to find ways to counter a rising Chinese Navy. The easiest and most comfortable course is to ask for more ships and aircraft, but with a defense budget that may have reached its peak, that may not be a viable strategy. Privateering, authorized by letters of marque, could offer a low-cost tool to enhance deterrence in peacetime and gain advantage in wartime. It would attack an asymmetric vulnerability of China, which has a much larger merchant fleet than the United States. Indeed, an attack on Chinese global trade would undermine China’s entire economy and threaten the regime’s stability. Finally, despite pervasive myths to the contrary, U.S. privateering is not prohibited by U.S. or international law.

What are Letters of Marque?

Privateering is not piracy—there are rules and commissions, called letters of marque, that governments issue to civilians, allowing them to capture or destroy enemy ships.1 The U.S. Constitution expressly grants Congress the power to issue them (Article I, section 8, clause 11). Captured vessels and goods are called prizes, and prize law is set out in the U.S. Code. In the United States, prize claims are adjudicated by U.S. district courts, with proceeds traditionally paid to the privateers.2 (“Privateer” can refer to the crew of a privateering ship or to the ship itself, which also can be referred to as a letter of marque).

Congress would likely set policy—for example, specifying privateer targets, procedures, and qualifications—then authorize the President to oversee the privateering regime.3 Congress also could indemnify privateers from certain liabilities and curb the potential for abuse and violations of international law through surety bonds and updated regulations on conduct.

Letters of marque could be issued quickly, with privateers on the hunt within weeks of the start of a conflict. By contrast, it would take four years to build a single new combatant for the Navy. During the Revolutionary War and the War of 1812, privateers vastly outnumbered Navy ships, with one U.S. official calling privateers “our cheapest and best navy.”4 Though many were lost, thousands sailed and disrupted British trade.5 British officials complained they could not guarantee the safety of civilian trade.

Privateering constitutes a once universally accepted but now thoroughly unconventional way of harnessing the private sector in war.

The rise of the Chinese military has been well documented, but a few points highlight why privateering would be a useful element of U.S. naval strategy.

China has built a powerful defensive network around its homeland, sometimes called an antiaccess/area-denial (A2/AD) envelope. As one element of this strategy, China has expanded its navy from a modest coastal force in the 1980s to an oceangoing force of at least 200 ships, with sophisticated air defenses, antiship missiles, and even aircraft carriers. Backing up the navy are land-based missiles and bombers.

Cracking open such a defense would require a naval campaign more demanding than anything the U.S. Navy has done in the past 70 years, leaving little capability for other tasks, such as hunting down China’s global merchant fleet. Whatever limited naval forces might be left over from a campaign in the Pacific would be needed to keep an eye on other potential adversaries, such as Russia, Iran, or North Korea.

China has aggressively expanded its global economic and diplomatic influence through its Belt and Road Initiative, but this expansion creates a vulnerability, as these investments must be protected. Chinese vulnerability goes deeper. China’s economy has doubled in the past 15 years, driven by exports carried in Chinese hulls. Thirty-eight percent of its gross domestic product (GDP) comes from trade, against only 9 percent of U.S. GDP.6 Chinese social stability is built on a trade-off: The Chinese Communist Party has told the people they will not have democratic institutions, but they will receive economic prosperity.

China’s merchant fleet is large, because the cost to China of building and operating merchant ships is low, and its export-driven economy creates a huge demand. In 2018, China had 2,112 ships in its global merchant fleet and Hong Kong had another 2,185.7 In addition, China has a massive long-distance fishing fleet, estimated at 2,500 vessels.8

By contrast, the United States has only 246 ships in its merchant fleet. That fleet—expensive to build and operate—is sustained mainly by the Jones Act, which mandates that ships conveying cargo between U.S. ports must be U.S.-flagged.

This asymmetric vulnerability gives the United States a major strategic advantage. The threat privateering poses to the Chinese economy—and hence the Communist Party—could provide the United States with a major wartime advantage and enhance peacetime deterrence, thus making war less likely. Even if China threatens to dispatch its own privateers, U.S. vulnerability is comparatively small.

Size of the Dog in the Fight

The ordinary course of action would be to have U.S. Navy warships drive China’s merchant fleet from the seas. However, the U.S. Navy would have its hands full taking on the People’s Liberation Army Navy (PLAN). The U.S. fleet is down to about 295 ships, and though it may reach and surpass 340 in the early 2040s before declining again, the goal of 355 ships is probably out of reach.9 A conflict with China would likely require this entire fleet; indeed, against a capable PLAN adversary defending its home waters, even 355 ships might be too few.

By contrast, in World War II, the U.S. Navy grew to 6,700 ships, counting neither Great Britain’s huge fleet nor contributions from other allies.10 And the allies, Britain and France particularly, had a global network of colonies that denied adversaries sanctuary and provided bases for operations against enemy ships. Comparable assets will not be available in a future conflict. Indeed, some former allies and colonies might even give sanctuary to Chinese vessels.11

Cruise the Seas for Chinese Gold

Capitalizing on Chinese vulnerabilities requires large numbers of ships, and the private sector could provide them. The ocean is large, and there are thousands of ports to hide in or dash between. While the Navy could not afford to have a multibillion-dollar destroyer sitting outside Rio de Janeiro for weeks waiting for Chinese vessels to leave, a privateer could patiently wait nearby as U.S. diplomats put pressure on (presumably neutral) Brazil.

Neither recruiting crews nor the need to arm ships would constitute a major obstacle. Privateers do not need to be heavily armed, because they would be taking on lightly (or un-) armed merchant vessels, choosing vulnerable targets, or acting cooperatively with other privateers. Since the goal is to capture the hulls and cargo, privateers do not want to sink the vessel, just convince the crew to surrender. How many merchant crews would be inclined to fight rather than surrender and spend the war in comfortable internment?12

The existing private military industry would doubtless jump at the chance to privateer. Dozens of companies currently provide security services, from the equivalent of mall guards to armed antipiracy contingents on ships. A large pool of potential recruits has shown willingness to work for private contractors. At the height of the Iraq War, for example, the United States employed 20,000 armed contractors in security jobs.

In fact, private security vessels already have been created, demonstrating the concept’s viability. The private security firm Blackwater outfitted an armed patrol craft to defend commercial shipping from Somali pirates.13 At the height of Somali piracy, there were some 2,700 armed contractors on ships and 40 private armed patrol boats operating in the Indian Ocean region.14

Just as the prospect of prize money induced thousands of seamen to sign on with privateers during the Revolution and the War of 1812, similar inducements—such as the prospect of earning millions of dollars from a single capture—would attract the needed personnel in a future conflict.

The notion of privateering makes naval strategists uncomfortable because it is an approach to war that does not conform to the way the U.S. Navy has fought since 1815. There is no modern experience of their use, and there are legitimate concerns about legal foundations and international opinion. But strategists cannot argue for out-of-the-box thinking to face the rising challenge of China and then revert to conventional solutions because out-of-the-box thinking makes them uncomfortable.

As the strategic situation is new, so must our thinking be new. In wartime, privateers could swarm the oceans and destroy the maritime industry on which China’s economy—and the stability of its regime—depend. The mere threat of such a campaign might strengthen deterrence and thereby prevent a war from happening at all. In strategy, as elsewhere, everything old shall be new again. 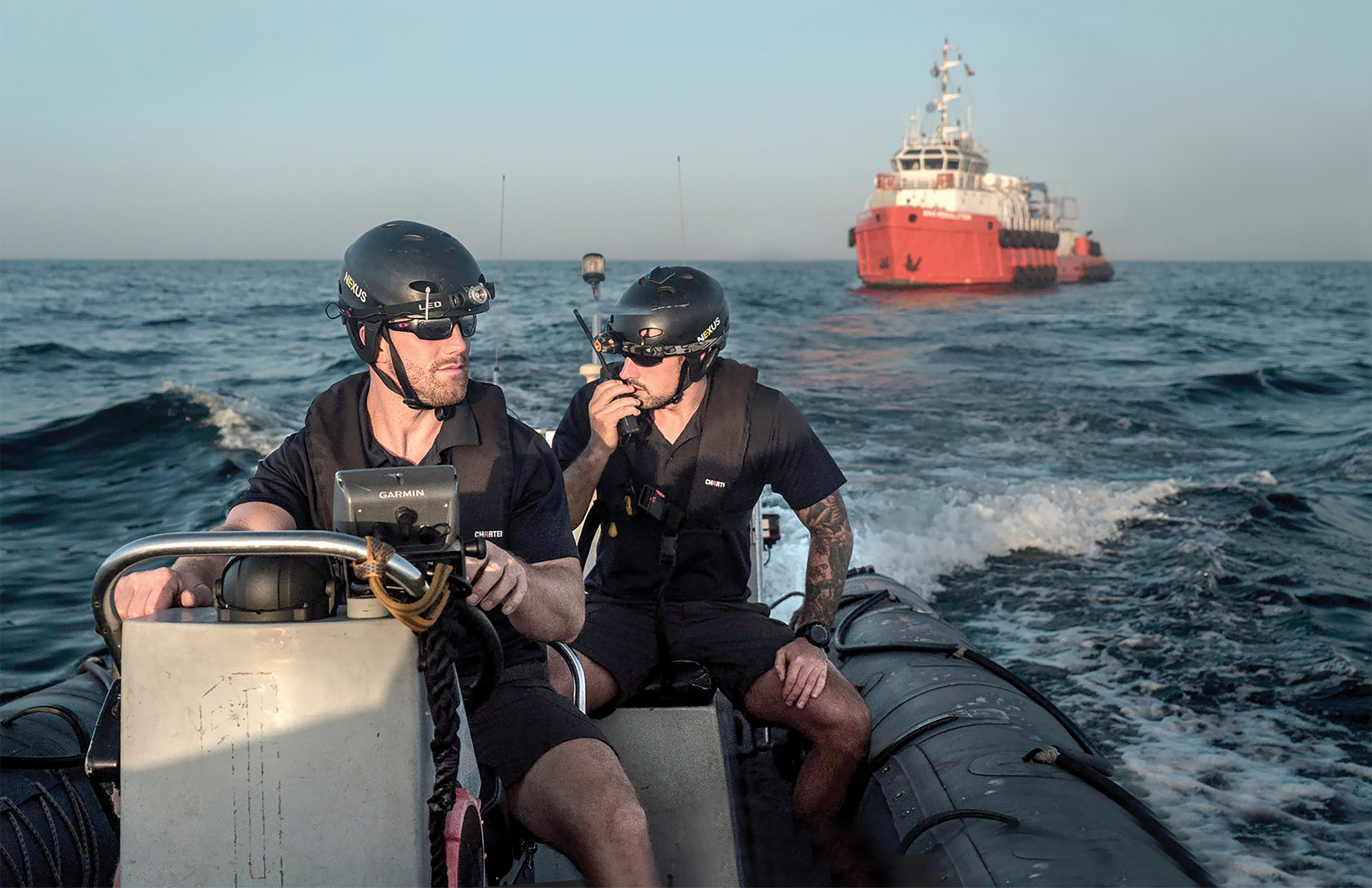 The threat of privateers to China’s maritime economy could strengthen deterrence and possibly prevent a war.
New York Times

Colonel Cancian is a senior advisor at the Center for Strategic and International Studies (CSIS), following a 37-year active-duty and reserve Marine Corps career that included two tours in Iraq. He writes about U.S. forces, budgets, and strategy and has been a frequent contributor to Proceedings.