The Renewed Backfire Bomber Threat to the U.S. Navy 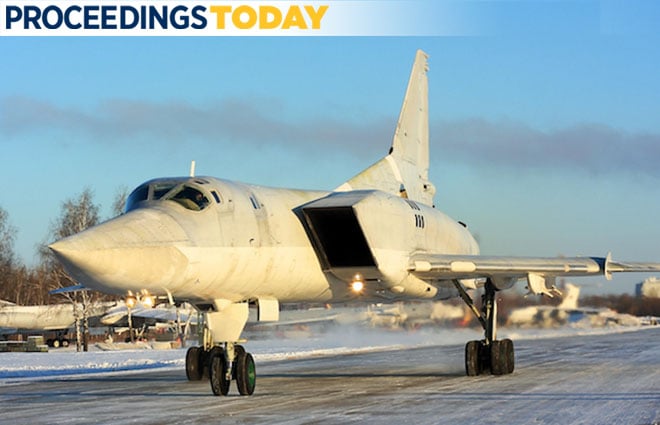 The Russian Air Force’s bomber fleet is back in the antiship strike business. During the Cold War, the Soviet missile-armed Backfire bomber represented one of the most serious threats to U.S. Navy carrier strike groups. The recently improved Russian version of the Backfire, the Tu-22M3M, represents enhanced capability in virtually every area except stealth. In 2012, the well-connected Russian publication Izvestiya reported that all Tu-22M3 Backfires will be assigned a naval mission. In 2018, TASS, Russia’s main official news agency, said that 30 bombers will be upgraded to the new configuration and will carry hypersonic missiles.1

The Backfire weapon upgrade is quite impressive, enhancing the bomber’s capabilities against both land targets and surface ships. In addition to the new land-attack missiles (the Kh-101 and Kh-555, according to Russian press), there reportedly will be at least two long-range ultrahigh-speed dual-capable (nuclear and conventional) missiles with land-attack and antiship capability. This is important because the Department of Defense has said the United States currently has no defense against hypersonic missiles. Backfire’s manufacturer, Tupolev, claims the improved Backfire bomber will be operational in 2021.

Russia already has increased the strike radius of the existing Backfire (Tu-22M3) by giving it air-to-air refueling capability, according to the Russian Defense Ministry.2 TASS reports the TU-22M3 has a range of approximately 4,350 miles (subsonic and at high altitude), which is greater than the 3,700 mile range stated by former Chief of the Russian Air Force Colonel General Viktor Bondarev (now a Duma parliamentarian) in November 2017.3 Backfire bombers routinely fly more than 3,100 miles to strike targets in Syria. The Tu-22M3M should have significantly longer range because TASS reports its new NK-32-02 engine is the same used in the new Tu-160M2 heavy bomber, which Russian Deputy Defense Minister Yury Borisov said will increase its range by approximately 600 miles.4

Not only does the TU-22M3 have improved range, but according to Russian state media it also carries the new Kh-32 long-range supersonic cruise missile. The Kh-32 travels just below hypersonic speed and is a dual-capable (nuclear and conventional) antiship and land-attack cruise missile. Sputnik News states its speed is Mach 4.1 and TASS puts it at more than Mach 5.5 That appears too high, except perhaps in a terminal dive, but even at Mach 4 at 130,000 feet it is a very serious threat, possibly invulnerable to existing Western air-defense systems.

According to Russian media and other Russian publications, the Kh-32’s range is 620 miles.6 Sputnik News and Russia Beyond the Headlines report that it is nuclear capable, which is confirmed in the 2018 U.S. Nuclear Posture Review.7 Russia Beyond the Headlines reports the Kh-32’s accuracy within a few yards and warhead weight limit at 1,002 pounds. This gives a powerful conventional antiship warhead capability as well. The Kh-32 reportedly became operational in 2016. If so, more than 100 operational Backfire bombers could be carrying it now.8

The Kh-32 makes it more difficult to intercept the Backfire before weapons-release range. The Soviet-era Kh-22 (still reportedly operational) has half the range of the new weapon. While post–Cold War U.S. Navy fighters have much better radars and avionics than the F-14, they lack its long-range (and even the F-14 range would not be adequate against a Kh-32-armed aircraft). The longer range of the Tu-22M3M complicates a carrier strike group’s ability to set up a barrier defense. The extreme speed of the missile reduces flight time by a factor of four compared to a subsonic antiship missile, reducing the defensive value of locational uncertainty between launch and impact time.

In a March 2018 speech to the Duma, Russian President Vladimir Putin announced the Kh-47M2 Kinzhal (Dagger) missile, describing it as a nuclear-capable hypersonic missile with a range of over 1,360 miles when launched from a MiG-31 fighter.9 The TU-22M3 is slower than a MiG-31, but even when launched from the supersonic Backfire, the Kinzhal has a long enough range to make it nearly impossible for the U.S. Navy to create any barrier defense capable of intercepting Backfires before they launch their missiles. This will put a great premium on developing both enhanced air/missile-defense systems capable of intercepting hypersonic missiles and advanced defensive electronic countermeasures for ships.

Finally, Sputnik News and TASS report the Backfire carries the Soviet-era Kh-15 (NATO AS-15) short-range (180 miles) high-velocity missile, originally nuclear but now dual capable.10 Sputnik News reports the Kh-15 is impossible to intercept in its terminal dive and now has a naval strike role. A Backfire can clearly carry a large number of them.

Tupolev claims there will be an 80 percent modernization of the aircraft’s electronics—including its navigation equipment, the bomb sites, communications, the new MV-45 radar, artificial intelligence, and a new electronic countermeasures (ECM) system. The Tu-22M3M reportedly has electronic systems similar to those on the newer Tu-160M2. Russia has put a lot of effort into ECM systems and its press features many glowing stories about their effectiveness. While Russian press may be exaggerating, Russian ECM is very good and will complicate intercepting the Backfire.

The Dire Reality of the Increasing Threat

The U.S. Navy probably will face an antiship threat from the Backfire for another 20 years. The antisurface strike missiles we currently know about will not be the end of Russian development in this warfare area. Before the Backfire is retired and replaced by the Pak DA heavy stealth bomber, even more advanced missiles, including those with greater stealth and hypersonic speeds, will be fielded. For example, a recent Russia Beyond the Headlines article suggested an antiship role for the new Tsirkon hypersonic missile, whose range the Defense Intelligence Agency assesses at 310-620 miles.11 And Sputnik News reports a very-long-range cruise missile is being developed for the Backfire.12 The Navy must soon develop the technology and warfighting doctrine to deal with this increasingly lethal long-range threat.

Dr. Schneider is a senior analyst with the National Institute for Public Policy. Before his retirement from the Department of Defense Senior Executive Service, he served in a number of senior positions within the Office of Secretary of Defense for Policy. He also served in the senior foreign service as a member of the State Department Policy Planning Staff.