Navy Information Warfare: A Decade of Indulging a False Analogy 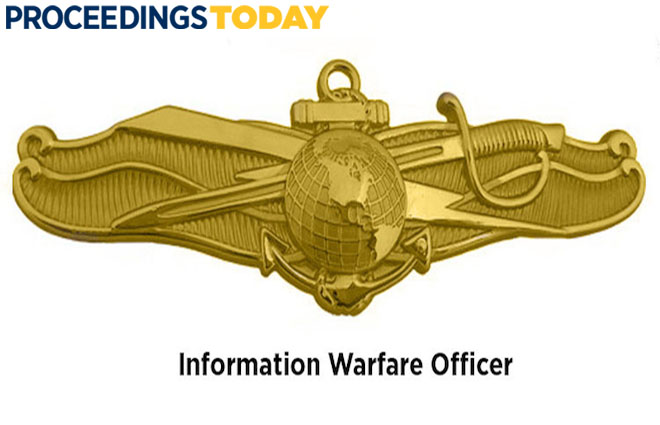 “A standard wholly false may have its error demonstrated with comparative ease, but no servitude is more hopeless than that of intelligent submission to an idea formally correct, yet incomplete. It has all the vicious misleading of a half-truth unqualified by appreciation of modifying conditions…”

The most insidious feature of the Navy’s thinking on information warfare (IW) is that it is partially correct. Its most dangerous consequence, which senior leaders appear not to appreciate or openly admit, is that weaving IW’s “half-truths” into the fabric of our force diminishes our prospects in combat.

An Unrestricted Line of Reasoning

No one could reasonably disagree with the call in the 8 January Proceedings Today article for a proper mission analysis of "what IW is and what it is not." It is telling, however, that the author does not await its results before recommending that IW officers have command at sea. Of course, one might ask why the Navy did not seek to understand IW more completely before naming a community after it, relegating naval intelligence to a conceptual subcategory of it, and integrating it into the composite warfare commander (CWC) concept. But better late than never.

A 2013 study by the Center for Naval Analysis came close. It got little play because it splashed cold seawater on the idea that the information-heavy activities gathered under OPNAV N2N6 in 2009 constituted a new doctrinal category of war fighting—an assertion that was sold to leaders and has underwritten the meteoric rise of IW’s stock.

The idea of IW officers becoming unrestricted line (URL) isn’t new. Until recently, however, that prospect was most often cited by IW critics to prove that comparisons between IW and the traditional warfare areas, without caveats, led to absurdities. Now, after just a few years of the IW community applying its new “Information Warfare” moniker literally (it was first named the Information Dominance Corps), with little or no resistance from the larger Navy, a growing number of smart and experienced IW professionals are convincing themselves they should be eligible to command maneuver forces at sea.

Those who favor the IW community's pursuit of warrior status tend to see that goal as affirmation of its importance. Those who question the agenda have no interest in affirmation.  For us, the IW community has been therapy for an inferiority complex we never had. The salient issue is not whether IW matches the importance or cachet of air, surface, or submarine warfare, but whether IW matches the nature of those warfare areas enough to treat it identically. Are they sufficiently alike to apply the same templates of doctrine, organization, training, and so forth?

No. If naval warfare areas are pillars, IW is horizontal support. It is mostly about providing information and recommendations across warfare areas; only a narrow slice is comprehensible as employing forces within its own warfare area. The Navy needs a crisp division of labor to excel at both. Breaking the IW community back into elements that can optimize for one or the other would be immensely helpful in this regard.

Certainly, IW professionals are closely integrated into operations—they make consequential decisions, and some IW activities bear alluring analogies to maneuver warfare. But analogy is not equivalence. The Navy's defining mission is dominance in a physical domain. As long as we remain a naval service, actions in the informational domain will be means toward that end. Leaders forged on bridges or in cockpits will have different qualities than leaders forged at keyboards. Reserving command of physical forces for those with the most experience operating them is a wise approximation.

The blurring of this distinction is the IW community's congenital flaw. It has us exaggerating similarities between IW and maneuver warfare. Blinding us to the differences. Cramming staff functions into command containers. Manipulating force structure to create units for IW officers to lead. Writing doctrine that glosses over the details of how information fits into naval warfighting but, miraculously, always suits the bureaucratic interests of OPNAV N2N6. Our prime directive has flipped from enabling an operational commander into being one. We have lost our objectivity in the exchange.

IW in the Fleet…Or Against the Fleet?

The most alarming advance of this pathology is the information warfare commander (IWC) afloat position in carrier strike groups (CSGs). The apex of IW at sea today is managing the force’s visibility to adversary sensors. The IW community casts it as an information-centric enterprise. But it is better understood as a set of dynamic constraints on maneuver, sensors, and communications imposed on tactical commanders operating their forces in the physical domains.

Selecting the trade-offs between minimizing signature and maximizing potency is perhaps the most crucial decision commanders make, and it necessarily impacts all warfare areas. This is why CWC doctrine sensibly forbids group commanders from delegating decisions on signature management to a subordinate warfare commander. By itself, this ought to be a fatal blow to the entire concept of an IWC afloat. Granted, a CSG needs a senior officer afloat to drive signature management. But that officer’s proper role is to give recommendations and monitor compliance, not to seize command territory.

Pushing IW commanders to the fleet when its actual need is for senior experts fills a knowledge gap but erects a pitfall for unity of command. The root problem is the taxonomical sloppiness of defining an informational domain simultaneously with physical ones, in the context of a CWC concept that depends on clear delineations of authorities and responsibilities. The intrinsic overlaps, ambiguities, and contrivances are why there has always been something not-quite-right with the IWC. There is a valid coordination role in the CWC construct, under the QUEBEC callsign, for a limited subset of information-centric activities. But QUEBEC doesn’t have to be a warfare commander. Tactical command-and-control is an unforgiving environment for honorary titles.

Other potential command duties for an IWC evaporate under similar examination. They either do not require a warfare commander to direct or rightly belong to others. But the IW community needs a major command equivalent, and it is determined to impose that requirement on the fleet—a disturbing inversion of priorities.

Effects of this error are difficult to spot now, particularly if one is uninterested in looking for them. CSG post-deployment briefs are generally supportive of the new IWC/N2N6 afloat model, although they paint a picture of teams doing their best to implement it rather than reaping its benefits. Conversations behind closed doors tend to be more critical. Regardless, commanders who value the presence of a senior officer focused on IW are apt to overlook their embellished job descriptions. The inaccuracy of an IWC in a CWC organization might only be discernable under the speed and stress of actual combat.

A Point of No Return

At a deeper level, the consequences of the IW community’s preoccupations with having operational “command” and producing flag officers with experience that aligns with the OPNAV N2N6 portfolio likely are years ahead. Career paths are already burdened with bizarre cross-discipline assignments to produce IW generalists that OPNAV N2N6 needs but the fleet doesn’t. New contortions to produce credible tactical commanders would further distract the community from its proper focus on the informational side of the warfighting decision loop. We will soon be passing the torch to a generation of intelligence, meteorology, and information technology professionals who see their core competencies as something to escape rather than embrace. By the time the institutional damage is visible, it will be irreversible.

The awkward set of proficiencies we have been forced to call “information warfare” is undeniably vital. We can easily imagine the contribution of a meteorologist, for example, leading to victory or defeat in battle against a peer adversary. Still, Navy and other national security leaders should step back, take a deep breath, and carefully scrutinize the daisy chain of Navy IW logic that leads to meteorologists commanding carrier strike groups.

Captain Henry Stephenson is a naval intelligence officer currently serving as director for intelligence (J2) for U.S. Transportation Command. His previous assignments include assistant chief of staff for intelligence (N2) at Carrier Strike Group Eight and at U.S. Fifth Fleet.