Team the P-8 and Sea Hunter for ASW 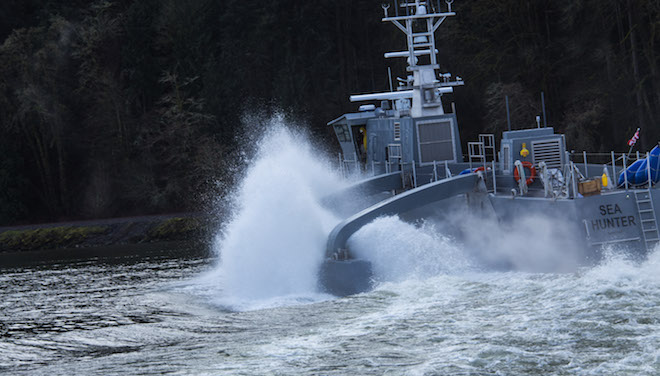 The U.S. Navy faces a growing submarine threat that it soon will be unable to match numerically. It is imperative that the service find an alternate approach. One solution is to use the U.S. Navy’s newly fielded P-8 Poseidon aircraft in tandem with the unmanned surface vessel Sea Hunter to prosecute submarines cheaply and with minimal manning.

China’s People’s Liberation Army Navy (PLAN) is investing heavily in diesel submarines, which are cheaper to produce than the United States’ nuclear counterparts. Given the price disparity, the PLAN likely will be able to deploy more submarines than will the U.S. Navy in the event of a future conflict. Currently, the U.S. Navy expects to have just 42 attack submarines by 2028, while the PLAN is projected to have at least 70 by 2029.1 Exacerbating this situation is that U.S. submarines must patrol the globe while China is able to narrow its mission area to the Indo-Pacific.2

Attempting to outproduce the Chinese in submarines is unrealistic. For the U.S. Navy to maintain its dominance in the undersea domain, it must adopt a paradigm shift. One avenue that is gaining traction is to leverage unmanned systems such as the Sea Hunter.

The Sea Hunter is the prototype for the Defense Advanced Research Projects Agency’s (DARPA’s) Antisubmarine Warfare Continuous Trail Unmanned Vessel program.3 It is the first field-tested medium-displacement unmanned surface vessel (MDUSV) that can go “from San Diego to Guam and back to Pearl Harbor on a tank of gas,” according to Scott Littlefield, DARPA program manager in the Tactical Technology Office.4 In June 2016, the Sea Hunter successfully completed all initial performance trials, and it has proved its ability to track submarines with its hull-mounted sonar. It is scheduled for offensive antisubmarine payload testing in 2018 and soon will have the ability to carry antisubmarine torpedoes.5

The principal advantage of MDUSVs is cost. The average diesel submarine costs about $400 million to build, compared to around $20 million for a Sea Hunter.6 These figures do not include the difference in the cost of manning, which clearly favors the Sea Hunter as it has no on-board crew.

It would be a serious oversimplification, however, to mass-produce unmanned surface vessels and expect them to autonomously track, detect, and destroy submarines. There are hardware, physical, and moral constraints. How, then, can the Navy optimize its use of MDUSVs? 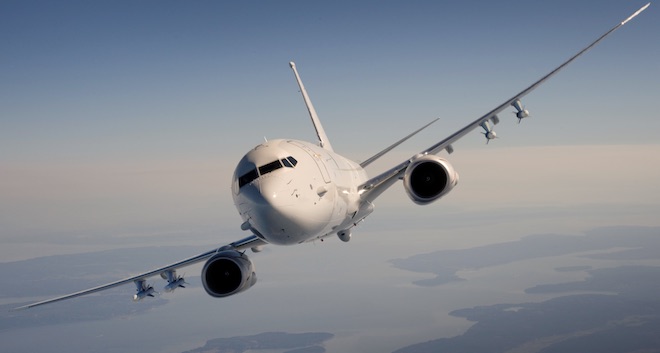 The P-8 has been paired with the Sea Hunter in simulations, which suggested the ideal implementation is for the P-8 to identify and confirm targets to be fired on by the Sea Hunter. This keeps the man in the loop for all lethal force decisions. (Defense Advanced Research Projects Agency)

The Boeing P-8 Poseidon is a powerful antisubmarine warfare (ASW) asset. It is capable of carrying 120 sonobuoys to detect submarines and can remain on station for approximately four hours while loaded for an ASW mission. Upon submarine detection, the P-8 can use its High Altitude Antisubmarine Warfare Weapon Capability (HAAWC) Mark 54 torpedoes to destroy the target.7 Equally important as its armament, the P-8 has the ability to control unmanned air vehicles to extend its sensor reach.8 This type of communications ensemble could be modified to integrate with the Sea Hunter, enabling the P-8 to extend its detection capabilities in ASW.

The P-8 and Sea Hunter have been paired in simulations, which demonstrated that the ideal implementation of the two platforms operating together would be for the P-8 to identify and confirm targets to be fired on by the Sea Hunter. This decreases the average time to locate and destroy the target submarine while simultaneously mitigating any moral argument against having an unmanned system carry weapons.

The U.S. Navy must ensure all decisions to engage with lethal force keep a man in the loop, that is to say, a human operator must always be the final decision maker when lethal force is used. To do that, MDUSVs must receive an order to fire from a human operator, which necessitates maintaining communication between the MDUSV and a manned platform. In this case, the ideal platform is the P-8 Poseidon.

The P-8 is a natural complement to MDUSVs. Its predecessor, the P-3 Poseidon, historically has worked in tandem with ASW surface vessels such as guided-missile destroyers and cruisers.9 The P-8 possesses a powerful communications suite that is more than capable of communicating with and controlling an MDUSV.10

Another advantage of using the P-8 is that submarines are hindered in their ability to fire on aircraft. Surface vessels that could pair with an MDUSV are at an inherent disadvantage because they work in the environment in which the submarine prefers to fight—the water.

There are three possible ways for a P-8 Poseidon to work in tandem with an MDUSV:

• The MDUSV searches autonomously and relays information to the P-8. This is the simplest implementation and, consequently, a logical first step.

• The MDUSV searches along with the P-8. When the MDUSV ascertains it has found a hostile submarine, it requests permission to fire on it. The P-8 crew makes the final decision on weapons release. This keeps the man in the loop; however, it necessitates constant and steady communications between the MDUSV and the P-8.

• The MDUSV and the P-8 work independently. When the MDUSV locates a submarine, it uses an algorithm to determine whether to fire on it.

Of these three options, the second is the most advantageous. First, having weapons on the MDUSV controlled by the P-8 nullifies any moral argument against arming unmanned vessels. Similar to Predator drones controlled by pilots on ground, the MDUSV in this instance is merely a weapon used by a human being. Second, using MDUSVs may provide the U.S. Navy a new means to pursue surface targets of interest.

Because it is expensive to conduct multiple tests with a P-8 and MDUSV in a tactical ASW scenario with a submarine, simulation is a necessary tool to quantify the benefits of this integration. One such software is the Littoral Combat Ship Integrated Toolkit for Mission Engineering Using Simulation (LITMUS). The modeler uses a map of the world to define a combat zone, builds agents with predefined behaviors and states, and runs hundreds of thousands of simulated missions built with LITMUS.

The baseline scenario for exploring the MDUSV’s value in ASW missions was a “red” submarine passing through a 110nm-by-50nm area at a speed of 6–10 knots that must be detected and killed by “blue” forces. The computer chose the speed and initial position of the red submarine south of the search area and also selected a destination to the north. Forty nonoverlapping sonobuoys were deployed in a grid pattern within the search area. The P-8 patrolled in the center of the search area and the MDUSV patrolled east and west in the middle.

LITMUS simulated 95,700 tactical ASW engagements using the MDUSV alone (Case A), the P-8 alone (Case B), and the P-8 and MDUSV working in tandem (Case C). One notable result is that there was a 32 percent improvement in Case B and Case C in destroying the submarine compared with Case A.

Mean time to kill was used to investigate which factor was most influential in determining whether the red submarine was destroyed in a given scenario. Using mean time to kill instead of probability to kill is more insightful because LITMUS software limitations caused the P-8’s kill success rate to be artificially high.

Because of the similarity in the mean number of kills for Case B and Case C, mean time to kill was used to break down the difference between the two cases, i.e., to quantify the benefit of the MDUSV. In a practical sense, mean time to kill can be interpreted to indicate a higher probability of killing, that is, the operating area of the submarine is smaller or the submarine’s initial location is more varied. Table 2 shows the distribution of the cases for the MDUSV only, MDUSV and P-8, and P-8 alone, with their mean time to detect, upper and lower confidence intervals, standard deviation, and number of samples. 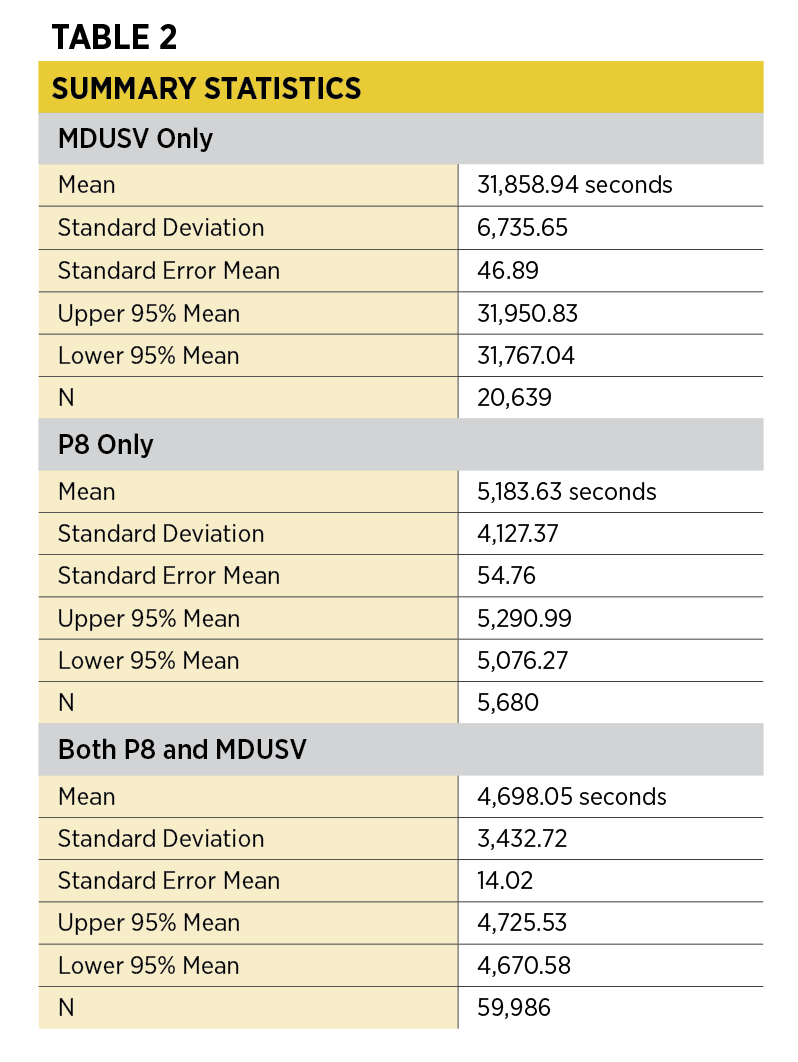 Another way to determine which factor is a more accurate predictor of whether the red submarine is killed is by using a sorted parameter estimates list. When the P-8 was present, a new factor was added to the scenario, namely, the performance of the sonobuoys. The conclusion that can be drawn from this is that sonobuoy performance is overwhelmingly the most important factor to estimate the mean time to kill the red submarine.

These data suggest that when the P-8 is working with the MDUSV, it kills the red submarine 10 percent faster, on average by approximately 485 seconds, or slightly more than 8 minutes.

For the U.S. Navy to maintain ASW superiority, it should combine the P-8 Poseidon with the MDUSV to offset a growing numerical disadvantage in submarines. Simulation has demonstrated that the ideal manner to implement this synthesis is by employing weapons on board the MDUSV controlled by the crew of a P-8.
It is time to test the concept in a sea trial against an allied diesel submarine.

1. Julia Bergman, “U.S. Navy Gearing Up for Boost in Submarine Production,” Navy Times, 23 September 2018. Dave Majumdar, “Undersea Crisis: China Will Have Nearly Twice as Many Subs as the U.S.,” The National Interest, 26 February 2016.

6. Magdalena Petrova, “This Self-driving Ship Could Be the Future of Military Warfare,” CNBC, 16 February 2018.

Lieutenant Tilus, a surface warfare officer, has served as electrical officer on the USS Kidd (DDG-100) and antiterrorism officer on the USS Somerset (LPD-25). He holds an undergraduate degree in computer science from the University of Arizona and master’s degrees in military defense technology systems from the National University of Singapore and operations research from the Naval Postgraduate School. He currently is attending Surface Warfare Officer School, after which he will be the plans and tactics officer on board the USS Benfold (DDG-65) based in Yokosuka, Japan.