Trust in Commanding Officers Is Not in Freefall 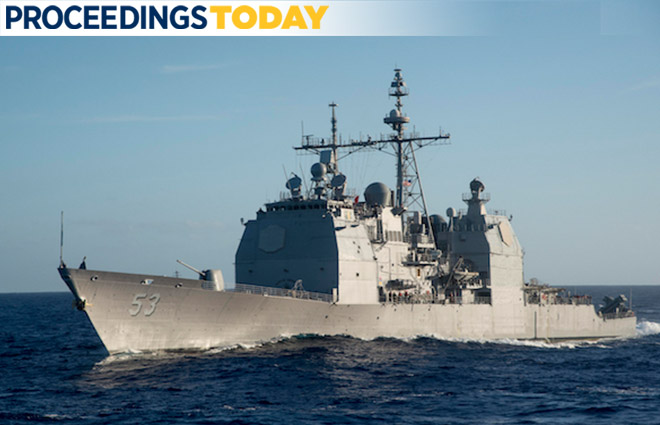 In his November 2018 Proceedings article “Charting a Course: Stop the Erosion of Command,” retired Captain Kevin Eyer asserts that trust in today’s Commanding Officers (CO) is in a state of near “freefall” and accountability has approached unheard of levels, to the point COs are “sacrificial lambs” to protect senior officer upward mobility. This narrative is fueled by changes within the surface warfare community as a result of the Comprehensive Review (CR).

In my experience as a cruiser CO, currently deployed to 7th and 5th Fleet, nothing could be further from the truth. Today’s COs are as empowered and trusted by senior officers as they were when Admirals Nimitz and Spruance issued mission orders for Pacific Fleet action.

In his first “Personal For” message to the Surface Force, Vice Admiral Richard A. Brown stressed he valued command above all else. On multiple occasions I have heard him reiterate his trust of COs and articulate his firm belief that, “As the CO goes, so goes the ship.” I have not witnessed a rush to increase senior involvement in shipboard operations. Instead, I have witnessed implementation of initiatives and programs designed to increase watchstander proficiency and shipboard lethality and emphasize trust and authority of COs.

Particularly abhorrent to Captain Eyer is the requirement to implement standardized battle and standing orders. To be clear, these orders do not tell a CO how to fight or operate their ship. Instead, the orders provided a common template to convey fighting and operating guidance as a means to reduce variance across the force. Implementation of standardized orders in my command was not an abdication of tactical thought and experience, as suggested by Captain Eyer, but rather an opportunity to validate my current shipboard operating and fighting instructions. In doing so, I discovered that my standing and battle orders were more robust than the template, and in nearly every instance already contained the necessary elements. Despite initial misgivings, compliance amounted to little more than an exercise in formatting.

In the wake of 2017, the surface force enacted a number of oversight and policy initiatives to build, assess, and sustain navigation and seamanship competency while increasing at-sea experience. The goal of these initiatives is to ensure our surface force is the most competent and lethal Navy on the planet. I was just starting Basic Phase training as many of these initiatives were rolled out and was one of the first to pass through many of them. Did I like fitting the additional requirements into an already compressed schedule? No. Did they uncover areas where my team could improve and therefore make us more competent and lethal? Absolutely.

Trust in COs is the foundation for implementing the new Surface Force Training and Readiness Manual (SFTRM). The premise of the SFTRM is to return ownership of basic phase certification to COs. The SFTRM affords COs the opportunity to accomplish certifications ahead of schedule and enables them to work towards high-end warfighting readiness prior to the advanced and integrated phases. Ships will no longer be bound to a lock-step approach toward certification and COs will be able to use their best judgment and reason to shape their training and certification schedule with the goal of certifying early.  The SFTRM enables COs to create a culture of excellence in their ships.

During the past 25 months in command, I have not experienced a lack of trust or excessive oversight from senior officers in an effort to “cover their six”; nor have other COs that I know. I attribute this, in part, to the tenet of “when in command, command.” Senior leadership continues to demonstrate full support and trust for COs that display initiative, state intentions and implement solutions to address very difficult shipboard problems head-on. Contrary to the naysayers, COs are imbued with authority to conduct the very dangerous business of taking ships to sea in support of national defense objectives. With their authority goes absolute accountability for unit actions—it is an inescapable truism for those who embrace the challenge of command. This trust and authority are displayed daily around the world by COs who are thinking, acting, and if needed, fighting independently to safeguard their ship and accomplish their mission, many times while operating independently.

The narrative that COs are untrusted, sacrificial lambs existing solely to shield senior officers from retribution for unit-level failures is flat out wrong. COs are trusted to prepare their ship, their crew, and themselves for combat at anytime and anywhere. They are building readiness so it can be turned into lethality when and where our nation requires, while senior leadership is setting the conditions for excellence so COs may Own the Fight.