The Marine Corps Must Locate, Close With, and Destroy Stress 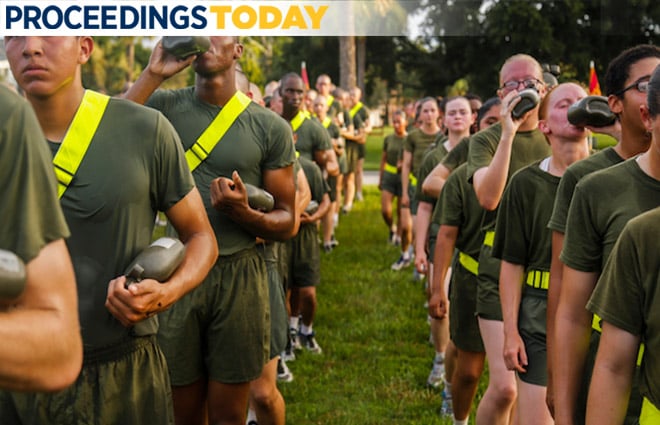 Institutionally enabled and self-induced chronic stress is one of the greatest threats to the security of the Marine Corps as it confronts difficult and diverse challenges. While often considered a temporary mental-emotional state, stress has very real acute and lasting effects on the intellect, body, and spirit. Chronic stress erodes health, complicates family life, inhibits work performance, and makes Marines more susceptible to injury. Far too many Marines exhibit signs of physiological maladaptation, mental and emotional distress, anthropometrically unsound excess, breathing pattern disorders, intellectual burnout, and spiritual emptiness. Time spent suffering and recovering from the various states related to chronic stress exacts a significant operational and fiscal cost on the service.

This condition is not well understood Marine Corps–wide, contributing to a decline in health, fitness, resiliency, and readiness in every Marine. When held under the lens of the Commandant’s guidance for a more holistic approach to overall wellness, the current health paradigm fails on numerous levels. The Corps must change its current health and wellness methodologies and adjust its views and stances on harmful, yet culturally and institutionally accepted practices.

Stress produces a host of physiological adaptations. Stress on the musculature and the cardiovascular system from properly programmed exercise produces beneficial (called eustress) results. However, lack of sleep, overtraining, poor diet, and excessive stimulant intake can cause lasting physical and mental damage. Chronic exposure to distress has been associated with maladaptations that contribute to health complications ranging from anxiety and heart disease to depression, abusive dietary habits, and chronic pain.1 The most notable physiological effects of stress are reactions in the sympathetic nervous system, often referred to as the “fight or flight” response. This response releases hormones and chemicals such as epinephrine, norepinephrine, and cortisol, which are needed when immediate survival is at issue.

Cortisol produced in response to continued high stress levels compromises the body’s regulatory systems and suppresses immunological functions. Research illustrates how the release of glucocorticoids suppresses the immune system to prepare the body for the immediate fight. The “threatened” state that results from constant sympathetic dominance is at the heart of many health complications.2

Anxiety is often viewed as “situational,” but everything a Marine does contributes to his or her levels of tension.3 Marine Corps culture itself contributes to all types of stress through promoting or tolerating overtraining, poor physical training (PT) programming, poor nutrition, addiction to sugar and stimulants, use of smokeless tobacco, poor sleep hygiene, poor posture, and dysfunctional movement. Additionally, the Corps has no system in place for effective stress management and relief and propagates the wrong-headed notion that pain, in any form, is a good thing. Moreover, anything occurring in the mind (perceived stress, anxiety, fear, anger) affects the body. Thoughts and ideas can produce the same chemical and hormonal response as an encounter with a bear.4

A recent RAND study showed that of the four services, Marines were most likely to abuse alcohol and drugs, and to have more than one sexual partner per year.5 These behaviors are poor coping mechanisms. As the cumulative adverse effects spread across other facets of their lives, results range from declining health and breakdowns in discipline to sexual misconduct, post-traumatic stress disorder (PTSD), and suicide. Individually, stressors can be managed, but when an institution’s culture enables and reinforces most or all of them, the task becomes almost insurmountable.

The Corps encourages practices wrongly perceived as beneficial. For example, many service members assume that finishing a workout in a state of exhaustion, with tired muscles and low levels of energy, is the key to elite physical fitness. However, extremely hard and intense PT is not healthier and will not produce better results than lower intensity training. “Suck it up” or “pain is weakness leaving the body” is dangerous training advice. Workouts that end with muscular fatigue, overall tiredness, and extreme breathlessness are detrimental to mission readiness and lead to overtraining.6

High-intensity training is damaging to the body when coupled with inadequate rest and recovery, affecting mood states and lowering immunological responses.7 The intentional sympathetic dominance of high intensity exercise drains the body of glucose, creating feelings of fatigue, lethargy, and exhaustion.8 A service-wide culture that uses and encourages random or sudden increases in the volume or intensity of training, a heavy training schedule, a lack of adequate recovery time, and poor coping mechanisms contributes to the overtraining syndrome and the cyclical nature of chronic stress.9 While an overtrained Marine might look fit, the internal workings of the body are not in harmony when subjected to excessive high-intensity exertion.10

The Marine Corps teaches good nutrition in Fueled to Fight and Military Dietary Reference Intakes, but it has not done enough to prevent service members from eschewing poor socially accepted eating habits or limiting fast food options on Marine Corps bases.11 Additionally, a plethora of energy drinks and supplements (which are not regulated by the U.S. Food and Drug Administration), coffee, sugary beverages, snacks, candy, and alcohol are readily available on most Marine Corps installations, further enticing service members away from healthy choices. Even the implementation of “athletic kitchens” will be insufficient in the face of such culturally accepted dietary options and practices. The number of harmful and unhealthy foods and beverages sold on base is too high to list here, but most by far contain ingredients that humans should not be consuming at all.

Most unhealthy foods put the body into the stress response state. The adrenal glands release cortisol to mitigate these pressures, which leads to temporary and sometimes chronic hormonal imbalances. These imbalances can elicit chemical dependencies that result in eating disorders ranging from mild to strong cravings to overeating, anorexia, and bulimia.12 Such foods also contribute to sugar addiction that manifests as mood swings, depression, and fatigue; as well as to gastrointestinal discomfort, insulin resistance, and adiposity (obesity).

The similarities are notable between symptoms of PTSD and the side effects of stimulants—anxiety, restlessness, mood swings, wakefulness, and irritability.13 Despite their potential for harm, coffee and energy drinks are commonplace and socially acceptable across the Marine Corps at all hours. Even though up to 400 milligrams of caffeine per day (four 8 ounce servings of coffee or even one energy drink) may be safe for healthy adults, caffeine as a counter to cumulative sleep loss and low energy is not safe.14 Producers of energy drinks are not required to accurately label caffeine content in the United States, but they may contain from 80 milligrams per serving to 500 milligrams per container.15 Such doses increase the risk of toxicity, with symptoms such as fast heartbeat, insomnia, anxiety, nervousness, and upset stomach. Studies suggest caffeine tolerance in heavy users, but these same studies illustrate that cortisol secretion is affected by repeated doses and afternoon use of caffeine, which may be particularly harmful to those with hypertension.16

Burning the Candle at Both Ends

Poor sleep hygiene increase stress, lowers productivity, creates a dependency on stimulants, and hinders decision-making ability. The perception that the need for sleep is a weakness or a luxury leads to a high prevalence of insomnia in the military.17 And yet the loss of sleep compounded with stress affects the circadian rhythm and further perpetuates sleeplessness. As sleep decreases, the strain on the body increases, raising the levels of cortisol released; as stress increases and sleep decreases, hyper-activation of the hypothalamic-pituitary-adrenal axis occurs, which in turn creates sleep fragmentation.18 This leads to the further production of high amounts of cortisol, which contributes to chronic insomnia.

A large base of evidence affirms that poor health results from the extreme stressor of insufficient sleep, which increases rates of mortality, cardiovascular disease, and type 2 diabetes, while impairing the immunological function.19 The Marine Corps has a zero tolerance policy on drinking and driving, yet regularly allows Marines to drive drowsy, which is proven to be as hazardous as driving under the influence.

A Matter of Initiative and Judgment

Even though the average Marine faces a staggering number of stressors, he or she is not prescribed nor required to participate in formal workplace or personal stress management programs. Programs that do exist (including the DSTRESSLine and Operational Stress Control and Readiness [OSCAR]), are reactive and do little to help service members stay ahead of the problem. Because stress is a major factor in degrading the health, function, and resiliency of the Marine Corps, relieving and managing it should be at the forefront of any health and wellness endeavor.

Instead, the service embarks on efforts such as the “de-glamorization” of excessive alcohol use, which is often a coping mechanism. More than half of the Marines surveyed for the RAND study did not get enough sleep.20 Almost half binge-drank in the past month; three-quarters saw the military as supporting alcohol use; a third reported a chronic medical condition; and nearly half suffered from pain in addition to another functional impairment.

Each facet of military culture and training adds differing and compounding levels of stress, creating needless health sacrifices and chronic ailments. When Marines leave the service, they should be more fit than when they joined. They should be armed with the knowledge, practices, and methods to improve and maintain their health, resiliency, and longevity. They should not leave plagued with injuries and ailments brought on by institutionally encouraged or tolerated coping mechanisms or training practices. No steps to mitigate or lessen these will prevail until the gargantuan issue of stress is tackled. To protect its security from the multifaceted and arduous task of living and operating in the 21st century, the Marine Corps must better attend to its Marines, through diminishing or eliminating harmful and unnecessarily taxing practices, ideologies, traditions, and culture. At the same time, it must introduce and sustain mandatory stress management, relief, and prevention methods and techniques.

13. E. Herbst, S. McCaslin, and R. Kalapatapu, (2017). “Use of Stimulants and Performance Enhancers during and after Trauma Exposure in a Combat Veteran: A Possible Risk Factor for Posttraumatic Stress Symptoms,” American Journal of Psychiatry 174, no.2 (2017): 95–99.

Gunnery Sergeant Zeran is a Force Fitness instructor and American College of Sports Medicine certified personal trainer. He has programmed and managed training for hundreds of Marines and currently serves at 1st Reconnaissance Battalion, offering consulting online in strength, conditioning, health, and stress management. He holds a bachelor’s degree in health and wellness from Purdue Global University.