Skip to main content
The Dutch minehunter HNLMS Willemstad (M-864) transits in formation during maneuvering exercises with Standing NATO Mine Countermeasures Group 1 and Estonian Navy ships, all participating in international exercises with allied nations in the region.
U.S. Navy

Central Europe’s geopolitical profile has changed significantly over the past 30 years, most noticeably as its frontier shifts eastward. During the Cold War, the Warsaw Pact occupied most of the eastern and southern coasts, closing the Baltic Sea to Western powers, while Denmark and Norway constituted the northwestern flank. Today, Russia holds just seven percent of the Baltic coastline, with its maritime stance stretched between the eastern part of the Gulf of Finland and an isolated enclave in Kaliningrad. With enlarged alliances, the north should be considered as two sub-theaters—Arctic and Baltic—because although very interconnected, the Scandinavian Peninsula acts as a shield covering both the Kola Peninsula and the Baltic Sea.1

In terms of the Baltic countries’ political aspirations, all except Russia, Finland, and Sweden are members of NATO; all except Russia are members of the European Union (EU); all Baltic EU members except Denmark are participating in the EU’s defense cooperation. Absent geographical cohesion, this creates a complex situation that should be discussed both on a case-by-case basis and as a regional whole. 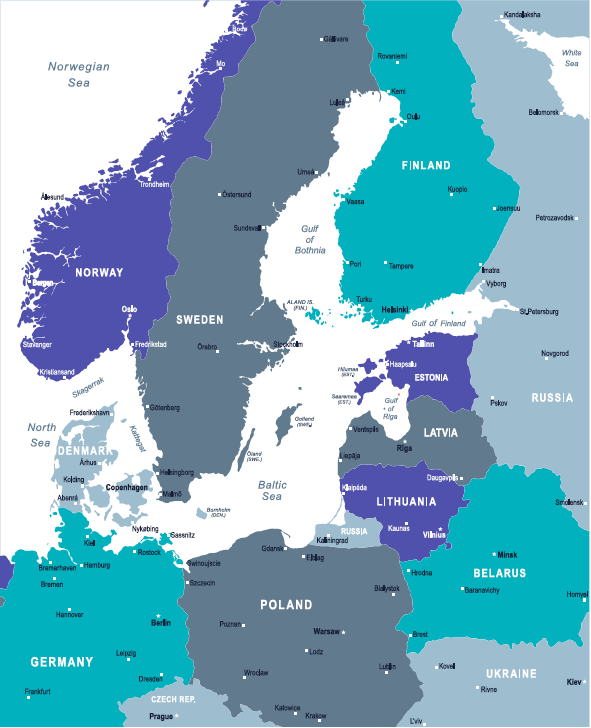 Militarily and economically, Finland has the greatest exposure with Russia, running from the Baltic to almost the Arctic Ocean. In addition, more than 80 percent of Finnish trade is transported on the Baltic Sea, so any military scenario between Russia and Norway would have severe consequences for Finland.2

The Gulf of Finland and the Åland Islands, lying at the entrance of the Gulf of Bothnia, are key to understanding the Russians’ actions in the region. The islands were a part of the 1856 Paris Treaty that ended the Crimean War and created a demilitarized area, and have fallen under the responsibility of Finnish defense forces. The Russians are aware of Finland’s ability to close the Gulf of Finland and disrupt trade heading into and out of St. Petersburg in the event of a conflict.3 From the Russian viewpoint, possession of Finland’s south coast and Åland Islands would allow it to control the Gulf of Bothnia, exploit the Gulf of Finland for its own purposes, and station its shore-based air defenses to cover the central Baltic Sea.

Sweden and Finland often are considered strategic partners in the eyes of NATO, but from a geopolitical standpoint their positions have been significantly different since the advent of the Cold War.4 Sweden has a considerable amount of shoreline on both the eastern and western borders of the country and, in the event of a closure of the Baltic Sea, could still access the North Sea.

Sweden’s largest island, Gotland, plays an important role in understanding Russian opportunities. Historically, Gotland has been a merchant station on the east-west trade route. Sweden recently placed a mechanized company of land forces on the island permanently, for both training and defense purposes. Sweden fears that in the case of hostilities in the Baltic, the Russians might first seek to occupy the island to deploy shore-based air defense systems and keep NATO out of the Baltic Sea.5

Geographically, Denmark sits at the mouth of the Baltic Sea, and therefore holds the keys to its entrance. In addition, the 61-mile-long Kiel Canal traverses the country, connecting the North Sea with the Baltic. The Warsaw Pact planned to use the Danish Straits and conduct operations in the North Sea, which complicated NATO naval forces in supplying the Central Front. Russia signaled the intent to target Denmark’s waterways and vulnerabilities during exercise Zapad 2013, but contemporary Russia is not the Cold War-era Soviet Union and that scenario can be seen as second priority in consideration of the Danish island of Bornholm. Within short reach of Kaliningrad, the northern and southern narrows of Bornholm are most suitable to interrupting shipping to the central and eastern Baltic.

From Central Europe’s perspective, the Baltic States are a narrow peninsula between Russia and the Baltic Sea. They are connected to Poland only by the so-called Suwalki gap—roughly 44 miles of common borderline between Lithuania and Poland, flanked by Kaliningrad in the west and Belarus in the east.

The Baltic States lack strategic depth. After crossing the Russian-Estonian border, a Su-24 flying a low-altitude attack profile at speed would take ten minutes to reach the main air base in Ämari, in northern Estonia.6 The entire peninsula is highly exposed to conventional land, air, and sea power, intensified by the fact that the individual countries lack the ability to defend themselves independently. Recently, the RAND Corporation used U.S. Naval Air Forces, Atlantic, wargames to estimate that Russian land forces could be at the outskirts of the Estonian capital of Tallinn or Latvian capital of Riga in 36–60 hours.7

The Estonian islands of Hiiumaa and Saaremaa potentially could be used to cover the air defense gap in central Baltic, and are less defended among other Baltic islands, such as Gotland and Åland. Estonia’s main strength is its geography: situated at the southern mouth of the Gulf of Finland, an Estonian presence could block the gulf and sever water access to St. Petersburg.

Russia’s strategic objective in the Baltic Sea would be to achieve sea control in the early stages of any conflict and block NATO forces from the area. The ways and means for creating that in the Baltic region are dictated by geography. Regardless of the environment of the actual attack—land, air, or sea—NATO would have a geographical challenge securing the entire area. Control of the Baltic Sea would give NATO two separate supply lines to the Baltic States: from the North Atlantic through the North and Baltic seas, and also over land through Germany, Poland, and the Suwalki gap.

NATO presently is able to influence the Baltic region by flying strike missions or firing cruise missiles from the North or Norwegian seas (this last option pending access to Swedish airspace), leaving Russia with an air defense problem. Russia’s biggest vulnerability in the region is Kaliningrad—a heavily armed outpost for Russia, surrounded by NATO territory and the sea. Russian land-based air defenses from Kaliningrad and St. Petersburg leave the central part of the sea uncovered, and as Russia does not yet possess area air defense capabilities afloat, it needs Gotland, Åland, or Estonian islands to become a significant threat. 8

Although Russia is the bully of Europe, this relationship is converse: 50 percent of its foreign trade is transported on the Baltic and 40 percent of the European Union’s natural gas comes from Russia. Economically, the Baltic Sea is a huge highway, with roughly 3,500 vessels traversing it at any given time.9 In 2012, Baltic ports handled nine percent of goods transported globally, and more than half of the Baltic trade is carried by sea. Any conflict fought on the Baltic Sea potentially would shut down the region economically. If Russia were to seek greater domination of the region, it could aim to do so through nonviolent means. Russia is prone to prefer nontraditional ways and means, and the Baltic Sea offers a multitude of options for doing that.10

NATO’s responsibility in the Baltic has only continued to grow in scope and complexity since the Cold War era. One of the biggest challenges is putting standing forces in the region. The sea is technically too small, too easily closed, and too subjected for principle surface combatants during a conflict.11 After the Cold War, Denmark and Germany turned their focus toward blue water, and largely lost capabilities suitable for the Baltic Sea. Newer NATO members have not yet managed to create capabilities in the area.12 There are therefore few platforms optimized for Baltic operations in NATO’s inventory, and those include smaller surface combatants, land-based aircraft, conventional submarines, mines, and coastal defense missiles.

Although NATO has stationed land forces—one battalion in each of the Baltic states and Poland—these forces are susceptible in the event of attack in that they need to be reinforced rapidly and heavily or else could become sitting ducks.13 This resupply and reinforcement can be conducted only by sea. For major land operations, command of the Baltic Sea is of vital interest for both sides. A precondition for sea control and land operations is a suitable situation in the air, and any action taken against Kaliningrad would require an air campaign. The battle for the Baltic will be decided on the sea and in the air.

In a worst-case scenario, NATO could be caught off guard and need to fight its way through to the eastern Baltic. The example of Malta during World War II shows that it can be done, but is extremely costly. An alternative would be to accept defeat and negotiate a withdrawal, but that would signal the end of NATO.

NATO’s situation in the region would be entirely different if Finland and Sweden joined the alliance, in which case the Baltic Sea would be NATO’s mare nostrum. Both countries have signed a host nation memorandum of understanding with NATO, allowing NATO forces to use Swedish and Finnish territory in times of crisis and conflict. The escalation of Russian activities slowly are pushing public opinions in both countries toward NATO, but accession probably will not happen in the foreseeable future.

Baltic geography makes the problem for NATO and possible solutions to it more challenging than during the Cold War era. A precondition for decisive ground action is control of the Baltic Sea and the air above it. NATO needs the ability to engage in a truly joint, multidomain battle, and an all-arms, all-services plan that stresses cooperation with local countries. The challenge of organizing the Baltic countries and states in the face of a Russian surprise is matched only in complexity by the area’s geography.

Lieutenant Commander Laanemets is a graduate of the Royal Danish Naval Academy and holds a master’s degree in maritime studies from Tallinn University of Technology. He presently is serving as the chief of staff Standing NATO Mine Countermeasure.