The Other Mine Warfare Will Work

Ask almost any U.S. Navy officer about mine warfare and the reply most likely will center on efforts to recapitalize the service’s surface and airborne mine countermeasures capabilities. It would be unusual to receive a response that has anything to do with the actual use of maritime mines by the United States or friendly nations.

Indeed, an internet search for the United States’ current offensive mine capabilities yields a disappointing response.1 The nation currently employs only two maritime mines: the Quickstrike family, which converts different sizes of air-launched general-purpose bombs into mines by attaching a simple target-detection device; and the submarine-launched mobile mine (SLMM). Both use 20th-century technology and are useful only in shallow water directly underneath a target vessel.

Meanwhile, a similar search of most competitor and adversary nations reveals a long-held recognition of the high leverage of offensive mining capability. These nations’ inventories are extensive and growing in sophistication.

The U.S. Navy is the world’s most recent victim of these inexpensive but disproportionately effective weapons. The USS Samuel B. Roberts (FFG-58) struck an Iranian mine and nearly sank in 1988. The USS Tripoli (LPH-10) and USS Princeton (CG-59) both struck Iraqi mines on the same day in 1991 during Operation Desert Storm, resulting in mission kills for both ships. Partly because of concerns over the threat of mining, U.S. Central Command only feinted landing an amphibious force in Kuwait during the same conflict.

The Navy’s response has been to dedicate additional resources and intellectual firepower to countermine warfare in an effort to preserve its freedom of maneuver. However, the service has overlooked the other half of the lesson: mines are a cheap and disruptive weapon in naval warfare.

This seeming blind spot exists despite the U.S. Navy’s own history of using these weapons with decisive effect. According to the service’s own website, in World War II, “U.S. aircraft laid over 12,000 mines in Japanese shipping routes and harbor approaches, sinking 650 Japanese ships and totally disrupting all of their maritime shipping.”2 The U.S. mining of Haiphong Harbor in Vietnam in 1972 helped bring that nation to the peace table.

Even Chinese Navy officials recognize this blind spot, stating that “relative to other combat mission areas, [the U.S. Navy’s] mine warfare capabilities are extremely weak.”3

There are several reasons offensive mine warfare has atrophied within the Navy. First, U.S. combatant commanders have not been clamoring for the weapon, preferring instead more traditional ways of waging war. Second, no powerful warfare or resource sponsor for mine warfare exists who can pound the table for the modest resources required to build the type of capability a first-rate naval power would possess. Third, mine warfare seems to U.S. Navy culture like something that would be used only by smaller and weaker navies, rather than by the world’s leading naval combat power.

Finally, some believe the United States should not invest in advanced mining capability because of misconceptions regarding whether international law allows the use of sea mines (to say nothing of the stigma accompanying weapons that lie in wait and have no direct human interaction). It is useful to explore this point a bit further.

Mines and the Law

The only treaty explicitly governing the use of sea mines is the Convention of 1907 Relative to the Laying of Automatic Submarine Mines (otherwise known as Hague VIII). It applies only during and after conflict, and only to contact mines and torpedoes. All other governance exists as international law derived from other related agreements or as state practice.

Naval mines clearly are lawful weapons. The rules concern their application, which depends on how (for military or civilian targets), where (territorial or international waters), when (peacetime or wartime), and why (self-defense or aggression) a state intends to use them. Mines may be used for a blockade, but their use must be able to discriminate between innocent ships and combatants. Hague VIII, as well as the law of war principle of distinction, prohibits the use of mines for the sole purpose of interdicting innocent commercial shipping.

One commonly accepted principle is that states are prohibited from laying mines in the territorial seas of another nation or in international waters in peacetime. U.S. policy, however, stipulates that the laying of controlled mines (mines that require an affirmative action to be armed) in international waters even in peacetime is legal “if they do not unreasonably interfere with other lawful uses of the ocean” and allows factoring in self-defense, including collective self-defense, concerns.4

The bottom line is that international law provides ample opportunities for the use of sea mines. Nonetheless, emphasis on more traditional warfighting concepts has left little room for emphasis on offensive mine warfare in the U.S. Navy. Indeed, the U.S. Air Force has focused at least as much on offensive mine warfare as the Navy, maintaining an active inventory of Quickstrike mines for use in potential future conflicts (including a new version capable of being launched from standoff range and gliding to its target).

But the world is changing rapidly for the U.S. Navy. The forward, extended range, and exposed nature of Navy operations is colliding with the rapid progress competitor nations are making in closing once-undisputed capability gaps and creating new, unfavorable ones in what often is billed as antiaccess/area denial warfare. In addition, at a time of uncertain budgets, the services should be looking for higher leverage methods of conducting warfare. It makes sense to open the door to new operational concepts—or to revive old ones—and mate them with modern technology to present new dilemmas for potential competitors. At the forefront of this should be offensive mine warfare. We are way behind, and we need to catch up.

The Art of the Possible

What could a modern-day mine, using advanced technology coupled with an imaginative concept of operations, look like?

To begin with, the Navy should seek more than just a mine. It should be looking for a weapon attached to a sensor, not a sensor attached to a weapon, so it probably should not even be called a mine. For now, let’s just call it “the device.”

Ideally, the device would possess the following characteristics, all of which are technically feasible but would need to be assembled in a new combination:

Such a device would have a variety of operating modes:

In their best seller The Second Machine Age, Erik Brynjolfsson and Andrew McAfee make the point that “the true work of innovation is not coming up with something big and new, but instead recombining things that already exist.”5 Much, if not all, of the technology needed to bring the United States’ offensive mine warfare capabilities into the 21st century exists. Software development for the device would be a fascinating project. Both the traditional defense industrial base and nontraditional innovation bases are capable of developing or contributing to this capability. Someone just has to ask them to do it. It is a perfect candidate for the Defense Department’s renewed emphasis on rapid, fail-fast prototyping and acquisition.

This capability would be a game changer for combatant commanders: imaginative planners are more than capable of exploring the new concepts of operation it would enable. Key operational questions would be why, when, where, and how to emplace such devices. These decisions would be based on a host of factors, including whether the full capability was installed (e.g., inclusion of the weapon), the probability of detection of both the laying activity and the devices themselves, and levels of tension. With its ability both to discriminate and to be remotely activated and deactivated, the device would make U.S. mines even more compliant with international legal concerns. As such, the nation would be more willing to employ them without fear of international opprobrium.

Advanced offensive sea mines would pose a high-leverage deterrence dilemma to competitor nations should they threaten the United States or its allies or friends. Because of their dramatically expanded employment capability, these sensors and weapons could be deployed with lower risk to conventional U.S. forces and with no concerns over host-nation permissions. As the technology matures to allow acoustic control, more advanced deep-water capability using the same concept and a different weapon could interdict threats to our homeland as they pass through strategic choke points en route to positions off the U.S. coast. They also eventually could be used to protect undersea cables, which are a key area of vulnerability for the U.S. economy.6

The legal, technical, and conceptual challenges to developing and employing such a device are surmountable. It will not be enormously expensive to develop or procure. The only question will be whether cultural and programmatic challenges will continue to stand in the way. Of one thing we can be nearly certain: if the United States does not do this, another nation probably will . . . and probably already is.

1. For purposes of this discussion, offensive mine warfare includes use of mines for defensive purposes. The term is used to distinguish between a nation’s own use of mines and countermine warfare. 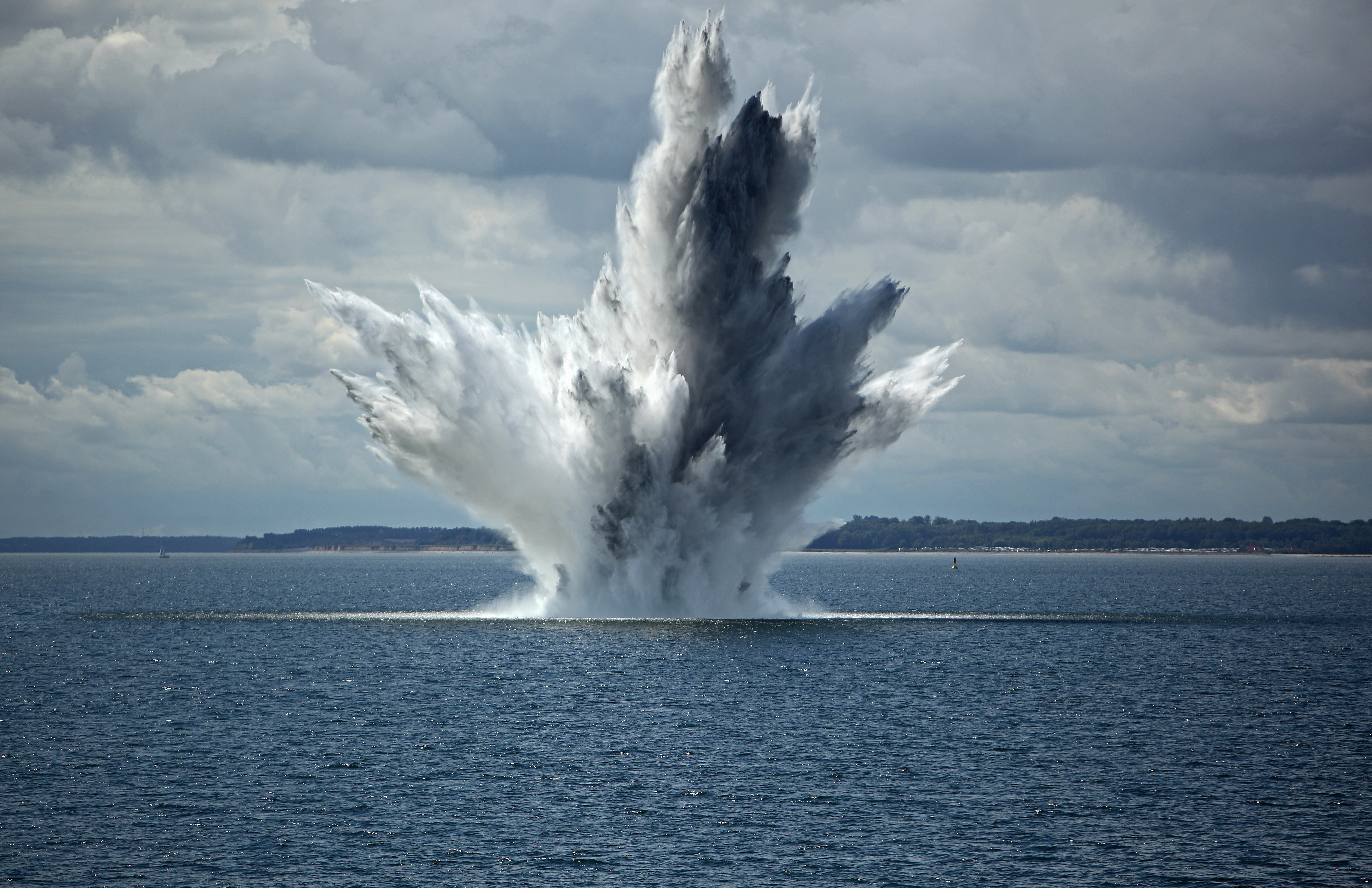 Admiral Winnefeld retired from the Navy in 2015 after serving as the ninth vice chairman of the Joint Chiefs of Staff.

Captain Ahmad retired from the Navy in 2016. His last assignment was as staff judge advocate to U.S. European Command.