Lest We Forget—A Final Embrace 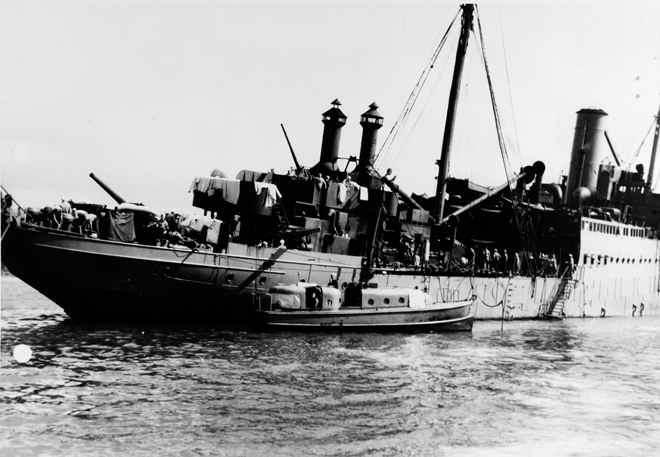 It was a warm Saturday morning when the USS Vestal (AR-4) slowly but expertly maneuvered alongside the great battleship. As lines went over to secure the two ships snugly together, it was evident to any objective observer that this was an incongruent pairing. The battleship was nearly 150 feet longer and more than double the displacement, but the most notable difference to a seasoned sailor’s eye was in the two ships’ armament. In the morning sun, a main battery of 12 14-inch guns cast long shadows across the battleship’s holystoned deck, a menacing contrast to the assortment of minor-caliber weapons that made up the entirety of the Vestal’s combat capability.

In fairness, combat was not the Vestal’s main purpose. Unlike her nest mate, her potency was best realized in port, rather than on the high seas. She had begun her life in the Brooklyn Navy Yard in 1904 as a collier, but in 1913 she had been reconfigured as a fleet repair ship. When her crew of 600 went into action, they boarded other ships with hammers and lube-oil guns rather than cutlasses and pistols.

From his perch on the bridge wing, the Vestal’s captain, Commander Cassin Young, could see the tops of the battleship’s lower gun mounts, which had been painted bright red to signify her membership in Battleship Division One. With his ship securely moored, Commander Young crossed over to the battleship to pay his respects to the division commander, Rear Admiral Isaac Kidd, who had raised his flag in the USS Arizona (BB-39).

That evening, Commander Young dined alone in his cabin while the duty officers gathered in the wardroom for the evening meal. With Europe embroiled in a bloody conflict and ominous rumblings in the Far East, conversation naturally turned to the possibility of war on that 6th of December. Ensign Fred Hall, the assistant communications officer, raised a few eyebrows when he predicted the Japanese would strike there at Pearl Harbor. “Out of the mouths of babes. . . .”

The next morning, Japanese planes swarmed over Pearl Harbor, delivering death and destruction in large doses. Providing a small but determined antidote, the Vestal’s crew manned her few batteries and valiantly returned fire, despite the fact that their ship had sustained two bomb hits in the early moments of the attack. Commander Young personally took command of the 3-inch antiaircraft gun, while the black gang fired the boilers and damage-control parties fought several fires. The latter were assisted in their efforts when a bomb penetrated the Arizona’s main deck and caused a cataclysmic detonation of the battleship’s forward magazines; the blast actually snuffed out the fires on the Vestal. But that advantage was quickly offset by the cascade of debris—including body parts—that rained down on the repair ship’s decks and by the Arizona’s raging fires that now advanced across the narrow ribbon of fuel-covered water between the two ships.

Having been blown overboard, Commander Young returned to his ship and countermanded the order to abandon ship that had been given in his absence. He ordered the mooring lines to be severed with axes and, with the ship obviously sinking, maneuvered her toward a sandbar across the water, where he ran her aground.

In the aftermath, the once-great battleship would serve as the final resting place for most of her crew and eventually would become a lasting memorial to the great sacrifice made on that first day of the war. The repair ship had been unable to do anything for the Arizona, but by her skipper’s actions—which earned him the Medal of Honor—she would survive the war, performing countless repairs on her combatant sisters, many of whom played key roles in the great victory at sea that followed.