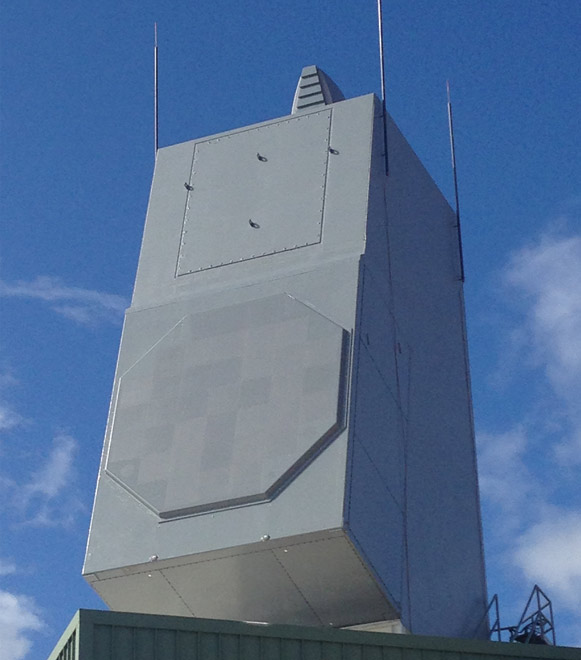 The testing, carried out at the Pacific Missile Range Facility (PMRF) at Kauai, Hawaii, has evaluated the radar’s ability to track satellites, aircraft, and ballistic missiles. In mid-March, in an exercise called Vigilant Hunter, the radar successfully acquired and tracked a short-range ballistic missile target.

PEO IWS’s program manager for above-water sensors, Captain Seiko Okano, U.S. Navy, said the test was “historic” as it was the first time the Navy employed a digital beam-forming radar. Okano added, “The SPY-6 is on track for delivery to the DDG-51 Flight III.” It will replace the SPY-1 radar, the centerpiece of the Aegis combat system long built by Lockheed Martin and in service on board Ticonderoga-class (CG-47) cruisers and Arleigh Burke-class DDGs.

The first Flight III ship will be the second Arleigh Burke funded in the fiscal year 2016 budget and likely will be hull number DDG-125 or DDG-126. The new radar will be integrated with the newest variant of the Aegis system, designated Advanced Capability Build 20 or Baseline 10, now in development. The Navy awarded a contract to Raytheon for engineering manufacturing development of the S-band SPY-6 AMDR and radar suite controller in October 2013, following a hotly contested competition with Lockheed Martin, which initially considered protesting the award.

Raytheon officials say a critical element contributing to the SPY-6 performance is the use of gallium nitride (GaN) technology for the fabrication of the radar modular assemblies that make up the system. The new material enables higher power density and great power efficiency. In 2013, the company was recognized by the Department of Defense for successfully completing a GaN improvement program for radio frequency technology and achieving “Manufacturing Readiness Level 8,” the highest possible, for its GaN work.

Tad Dickenson, director of Raytheon’s AMDR program, says a production-representative SPY-6 array completed near-field range testing at the company’s Sudbury, Massachusetts, facility in May 2016. In June 2016, the system was moved to PMRF and integrated with an advanced radar laboratory and brought up to full power the following month. The company then began software installations to expand the radar’s functionality for the test program.

An initial test tracked a satellite to show the system’s ability to track small objects moving at high speeds at long ranges. Testing then expanded to the integrated air and missile defense missions, using aircraft as air targets and satellites for the ballistic missile defense testing.

In December 2017, Raytheon won a Navy contract for long-range initial production and long-lead material for the first SPY-6 ship radar set. A production contract for the first ship set probably will be awarded later this year and will include below-deck equipment (such as power and cooling components), processing equipment, and the above-deck radar array. The first system is scheduled to be completed in 2019 for delivery to a shipyard, either Huntington Ingalls Industries or General Dynamics Bath Iron Works, which will share production of the Flight III DDGs.

The integration of the SPY-6 AMDR with Aegis calls for a new management process because, unlike the SPY-1, the radar is not built by Lockheed Martin. Dickenson points out that PEO IWS, Raytheon, and Lockheed Martin established an integration working group to develop and test incremental hardware and software interfaces between the new radar and the Aegis combat system. In May 2016, Raytheon delivered to Lockheed Martin a SPY-6 emulator that represents a “full tactical back end” of the system for the integration work.

Later this summer, Lockheed Martin engineers will integrate combat system elements with the production-representative system at PMRF. Second-phase integration with the Aegis combat system will be carried out at PMRF until 2018, when the system will move to the Navy’s Combat Systems Engineering Development Site located near Lockheed Martin’s facility in Moorestown, New Jersey, for further integration work.

Mr. Walsh is a veteran reporter of Navy and Marine Corps news and former editor of Naval Systems Update.