End Piracy in the Gulf of Aden 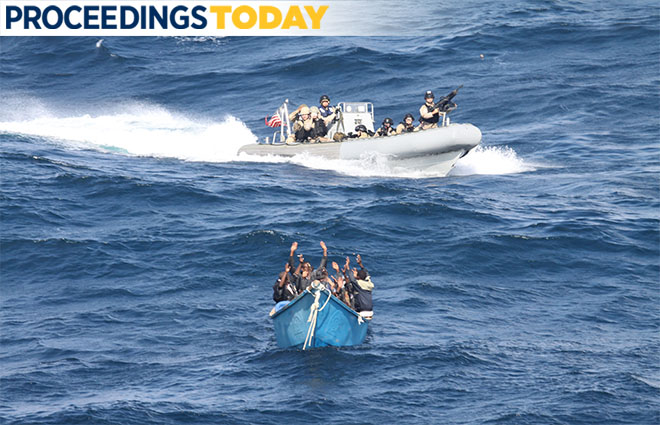 Steaming off the coast of Somalia on the morning of 13 March 2017, the motor vessel Aris 13 came under attack by two skiffs and was taken hostage by Somali pirates. For the first time in more than five years Somali pirates were successful in taking a commercial vessel hostage. At the height of piracy in 2010, almost 200 vessels were attacked and nearly 50 vessels captured annually. Was the capture of the Aris 13 a sign that piracy has returned?

Transiting from Djibouti to the Somali capital of Mogadishu, Aris 13 decided to save time and fuel by navigating within striking distance of the Somali coast and outside the internationally recognized transit corridor (IRTC) that offers the protection of several naval task forces patrolling the region.

Recently Oceans Beyond Piracy released their annual report—The State of Maritime Piracy 2016—which concluded that, of the billions of dollars spent on deterring piracy, 95 percent is spent at sea on maritime security efforts such as naval patrols and armed security teams, but only 5 percent is spent on building regional security capacity. The noteworthy efforts of the European Union’s Operation Atalanta, NATO’s Operation Ocean Shield, and Combined Task Force 151 were a major reason why piracy in the Gulf of Aden nearly disappeared over the past five years. However, with no successful piracy attacks since 2012, NATO terminated Ocean Shield in December 2016. Perhaps it was not a coincidence that three months later the Aris 13 was apprehended. Addressing the press in late April, the commander of U.S. Africa Command, General Thomas Waldhauser, U.S. Marine Corps, said there have been five or six piracy incidents in the region in the past several months, and he attributed the spike in attacks to the widespread drought and famine gripping the region. In addition, as in years past, there has been increased frustration with commercial fishing vessels trawling well within the territorial waters of Somalia without regard for international laws.

Why is piracy in the Gulf of Aden still a problem and of national security interest for the United States? Over 20,000 merchant ships, including ten percent of global oil trade, transit the Gulf of Aden annually. As a maritime nation, the United States relies on the free flow of commerce across the high seas, and protecting those flows always will be strategic mission for our naval forces.

As long as ships go to sea there will be piracy. The Gulf of Aden is three times the size of the Gulf of Mexico and requires enormous resources to patrol. To manage the problem, nations must work together to develop the right strategy and provide the resources to confront pirates directly as well as confront the sources of piracy in Somalia. Forums such as shared awareness and de-confliction (SHADE), sponsored by U.S. Naval Forces Central Command, could be the place to develop the strategy. SHADE brings together more than 30 nations to coordinate maritime activities to counter piracy in the Gulf of Aden and Indian Ocean. Providing economic assistance and nation-building advisors would enhance economic stability, raise standards of living, and improve the rule of law in Somalia. Improving security and living standards would diminish the underlying incentives for pirates. In the meantime, continued international naval presence in this prominent maritime transit region would limit acts of piracy to a manageable scale. The U.S. Navy gains the additional benefit from operating in the Gulf of Aden with essential coalition partners and fostering support in the region.

In the June Proceedings, Lieutenant Commander Michael P. Chien, wrote “Now Hear This—LCS Needs a Win,” making an argument for using the Navy’s littoral combat ships for counterdrug missions. The Freedom- and Independence-class ships would be great platforms for counterpiracy missions as well. To prevent pirate attacks, coalition ships must react quickly. The speed of the LCSs would give them an impressive advantage. An embarked helicopter detachment—like that carried on the Navy’s LCS ships—is also a decisive tool in counterpiracy operations. The Gulf of Aden would be an excellent place to showcase their capabilities.

The international community made great strides in reducing Somali piracy during the past ten years, and the U.S. Navy played a key role in that effort. It would be unfortunate to take our eye off the ball now. A successful long-term strategy to eliminate piracy will require a two-pronged approach: an international naval force must protect maritime shipping and interdict pirates, while diplomatic, security, and economic efforts to eliminate the root causes of piracy proceed within Somalia.

Admiral McKnight served as commander, Expeditionary Strike Group 2, from 2008 to 2009, and was the first commander of Combined Task Force 151. He is the co-author of Pirate Alley – Commanding Task Force 151 Off Somalia (Naval Institute Press).