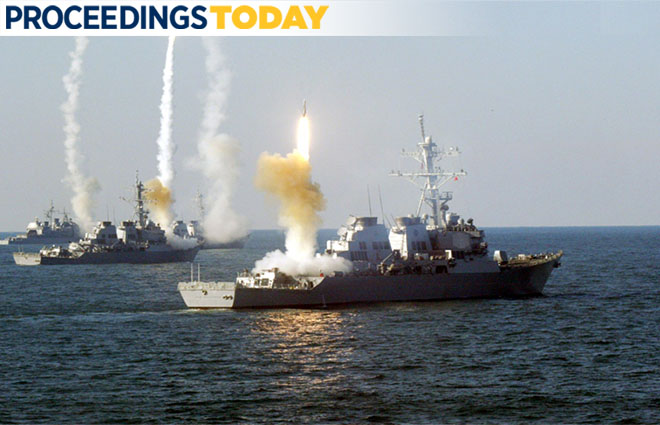 With the urgent need to rebuild the fleet’s capability and competence in sea control, a gap in the fleet’s operational repertoire has become increasingly apparent. Simply, there are few, arguably no, venues where operational-level naval formations are permitted to rehearse their wartime tasks free from the constraints of the formal training process or the distraction of technological experimentation. The fleet is overdue for a re-introduction of the Fleet Problem.

Twenty-one U.S. Navy Fleet Battle Problems were conducted between 1923 and 1940. These expansive at-sea operations provided essential preparation for success during World War II.1 Unique factors allowed the U.S. Navy to dedicate the majority of its forces and much of its senior leadership to these Fleet Problems during this period. While those factors cannot be recreated, many of the approaches that made the Fleet Problems effective can be:

·      Exercise Command. Fleet Problems were presented as problems to be solved creatively by operational commanders. This allowed commanders to command, exercising the mission command style of operational independence that is the traditional hallmark of U.S. Navy operations. The operational problem poised was typically an element or phase of a war plan that presented genuine uncertainty or complexity to the planning staffs and was selected by the CNO for the fleet to address.

·      Expect Failure. Fleet Problems were always two-sided. Sometimes the U.S. side was superior, sometimes significantly inferior. In Fleet Problem XIX (1938), the scenario assumed a major U.S. Navy defeat already had occurred, requiring friendly forces to defend from a position of weakness. Both forces were led by senior officers. In this environment, the Fleet Problems assumed there often would be a clear loser—and not a junior officer designated to be defeated, but an officer of stature and accomplishment. Senior officers could and did fail dramatically, were critiqued candidly and publicly, and continued to advance and lead. Indeed, across the 21 Fleet Problems, timidity and inattention seemed to be the only unforgivable errors in command.

·      Integrate ISR and EMW. While our predecessors used different terms, they understood their war at sea was first and foremost a scouting problem, and they devoted extensive attention to intelligence, surveillance, and reconnaissance. Similarly, electromagnetic maneuver warfare and signature control were essential elements of each event and widely discussed in the critiques. Commanders learned to balance the need to communicate (and later use of radar) with the threat of detection by an adversary.

·      Accept Implications of Events. In Fleet Problem III (1924), an insider sabotaged the battleship USS New York (BB-34) by gaining access to its magazine and simulating a catastrophic explosion while the ship was in restricted waters in the Panama Canal. Umpires ruled that not only was the ship lost, but that the waterway was closed to further transits. Since the point of the exercise was to investigate defense of the Panama Canal, Blue was ruled to have failed and the exercise concluded. Today, such asymmetric threats exist in both the physical and cyber world—and, if played realistically, have a similar potential to shut down fleet operations abruptly.

·      Demand Immediate and Honest Critiques. The critique of a Fleet Problem was often attended by every commander down to the unit level. In 1925, 800 officers gathered after Fleet Problem V to hear each of the commanders present their operations and lesson. The record suggests that these were not polished staff briefings, carefully harmonized to avoid contradiction of seniors, but were relatively free-flowing, interactive events with each side walking through their choices and assessments.

Our formalized training environment does not permit the exercise of independent action in complex operational scenarios. While the reality of a forward-deployed force does not allow the bulk of the fleet to be dedicated to a major training event, incorporating elements of the Fleet Problem model into smaller scale exercises would bring a level of rigor and realism that is key if the fleet is to be ready to fight.

Captain Rielage serves as the director for intelligence and information operations for the U.S. Pacific Fleet. He has served as the 3rd Fleet N2, 7th Fleet Deputy N2, Senior Intelligence Officer for China at the Office of Naval Intelligence, and Director of the Navy Asia Pacific Advisory Group. He is a frequent contributor to Proceedings.