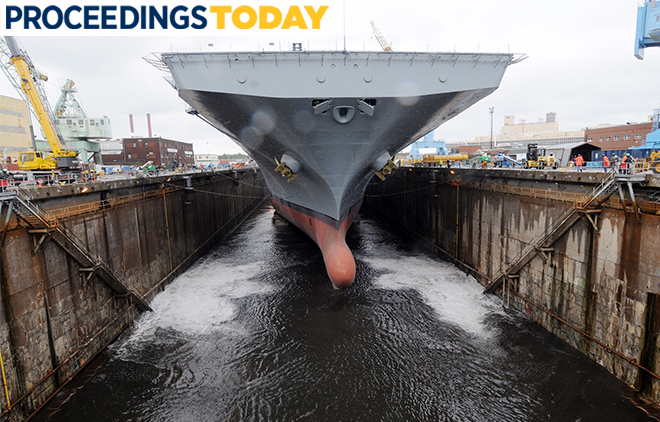 Much has changed in the U.S. Navy over the past 100 years, from technology to tactics. Yet one topic has not. The fleet’s support facilities consistently have taken a back seat to current operations.

Modernization standards set in 2013, right before sequestration hit, will not be met anytime soon. Maintenance overruns brought on by the implementation of the Optimized Fleet Response Plan only exacerbate the problem. Further, the age of the Navy’s existing infrastructure continues to degrade shore repair capabilities. Naval yard infrastructure is more than 60 years old on average, and our dry docks average more than 80 years old. Existing dry docks are being modernized and expanded to accommodate the new, larger Gerald R. Ford-class carriers and Improved Block V Virginia-class submarines, but these projects are scheduled to be completed barely in time for the first dockings of these class leaders.1

U.S Navy infrastructure problems date back at least to the early 20th century. In the spring of 1916, Rear Admiral John Edwards, U.S. Navy, wrote a report to Congress on the strategic importance of naval stations. On the eve of the United States’ entry into World War I, Edwards argued that having a larger fleet was not enough. Modern shipyards and naval stations were required to prepare and repair the fleet. In the report, he bemoaned the fact that the Navy lacked a distributed naval station network and facilities with modern dry docks. He compared the United States to both Germany and Great Britain, noting Germany had three great naval stations totaling only one fewer dry dock than the United States (despite only having a fraction of the coastline), and Britain operated an extensive string of bases and dry docks throughout its empire.2

The report further highlighted a problem of new ships exceeding the existing dry-dock dimensions. In the span of ten years, battleships had doubled in tonnage and lengthened by 150 feet. To remedy the lack of properly sized docks, the report called for a two-pronged campaign. First, rapidly expand naval dry docks; and second, push municipalities and commercial interests to construct docks large enough to accommodate these new ships.

Dry docks are a key component to the maintenance of any fleet and have historically been one of the most neglected aspects of our Navy. As the Great War waged in Europe, the U.S. Congress debated the various proposals for naval funding in 1916. Along with the call for a fleet “Second to None,” there came an increasing call from senior Navy leaders for an equally large program to expand and modernize naval stations and yards. These calls were answered with a 270 percent increase in funding for base improvements for 1917, a change that was vital to both the war effort and the future of the Navy.

Now, after more than a decade with the Navy’s focus on operations at the expense of readiness and upkeep, there are calls for maintenance and infrastructure improvements. While relative spending on operations, personnel, maintenance, and construction is never easy to balance, ignoring naval facilities has a domino effect on the state of the fleet. To borrow from the 1916 report, “maritime facilities for ‘repair’ should be closely associated with the ability to ‘prepare.’”3

Lieutenant Getway is a surface warfare officer who served on board the USS Bainbridge (DDG-96) as gunnery officer and navigator and as  an instructor in the history department at the U.S. Naval Academy. He is currently in the department head course at the Surface Warfare Officer School.