After the Cold War ended and the peace dividend hatchet slashed P-3 squadrons from 24 to 12, advocates for replacing the P-3 were perceived as dinosaurs for believing antisubmarine warfare might matter. Fortunately, the Navy moved ahead, and the P-8 Poseidons were on station when the resurgent Russian Navy submarines deployed to blue waters.
By Commander Daniel Dolan, U.S. Navy (Retired)
Proceedings
Vol. 143/8/1,374
Article
View Issue
Comments 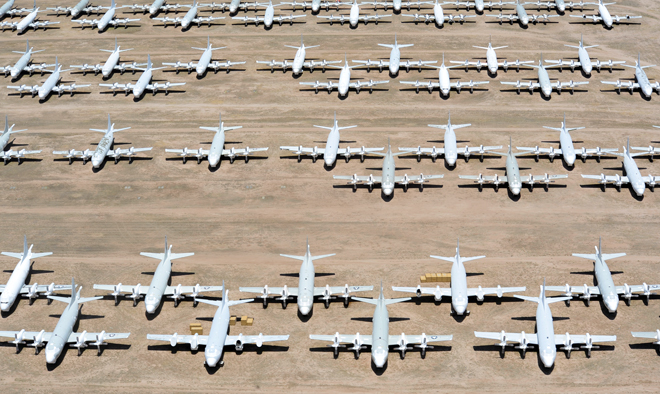 The influential naval theorist Alfred Thayer Mahan lived to see his theory of sea power tested in the first major conflict of the early 20th century. Writing his own Retrospect Upon the War Between Japan and Russia, Mahan noted, “ As is often the case, when war came it was already too late to remedy adequately the blunders or neglects of peace.”1

The U.S. Navy’s post-Cold War maritime patrol (VP) community could have become an example similar to the Russian fleet of 1905 without prescient thinking. Fortunately, the P-8 Poseidon is a positive example of peacetime preparations. Today, the fleet and the nation can be thankful there were naval leaders who pressed for a replacement of the aging P-3 Orion at a time when long-range maritime patrol aircraft (MPA) seemed obsolete. The push for a P-3 replacement came when the S-3 Viking was being phased out, half of all P-3 squadrons had been decommissioned as part of the post-Cold War “peace dividend,” and the remaining Orion airframes seemed destined to be the next candidates for a one-way trip to the boneyard.

Efforts to replace the P-3 began in 1988 when the Navy selected the Lockheed P-7 as the replacement platform. Former Patrol and Reconnaissance Wing 11 commander, now-retired Captain Sean Liedman, noted, “Two factors contributed to the demise of the P-7. First, Lockheed experienced cost and schedule overruns that induced doubts in the minds of Department of Defense (DOD) leadership. More importantly, the fall of the Berlin Wall in 1989 coupled with the demise of the Soviet Union and its submarine threat probably played a larger role in the cancellation.”2 The Navy canceled the P-7 program late in 1990.

A second blow to MPA was the death of the P-3 Update IV, a major sensor upgrade that would have modernized the P-3 mission systems and bridged the P-3’s tactical capabilities until the P-7 was ready for fleet introduction. In 1992, the Update IV program was canceled as part of the peace dividend cuts. The peace dividend hatchet also slashed the number of VP squadrons from 24 in 1989 to 12 squadrons by 1996. In the mid-1990s it seemed the MPA community would be slowly whittled away, and many questioned its relevance in the post-Cold War era. Navy maritime patrol and reconnaissance leaders recognized they were facing strategic obsolescence as the community’s primary mission area—antisubmarine warfare (ASW)—was perceived as irrelevant. The mission “literally evaporated with the fall of the Soviet Union.”3

The late 1990s were a time when ASW did not matter, defense budgets were shrinking, and competing fleet priorities were plentiful. The Cold War had ended a decade before, and voices advocating for replacing the P-3 were perceived by many as dinosaurs longing for a return to a glorious past or just to preserve the MPA community for its own sake.

Fast forward to 2013. The P-8 Poseidon arrived at exactly the time when submarines from a resurgent Russia were deploying into blue water and increasing numbers of modern Chinese submarines were venturing beyond the confines of the First Island Chain, making the leaders who had championed a new MPA platform when P-3s were mostly supporting overland missions in Bosnia and chasing drug runners in the Caribbean seem clairvoyant.

Seeing the future in 1999 meant first remembering an important lesson from the past. While no one in the late 1990s could predict the resurgent need for capable ASW platforms, the P-3 champions believed in the hard-won lessons from an earlier age of modern warfare. This core lesson of ASW history was woven into every student who passed through a patrol squadron training pipeline during the Cold War years. From the podium at the front of the classroom every student heard the story of an ASW lesson learned the hard way during the years between World War I and World War II. The story recounted the costly mistake that defense planners and military professionals made when they allowed perishable ASW skills and the technological instruments needed to find, fix, and kill submarines to lapse after World War I.

After the Allies won the first Battle of the Atlantic in the “war to end all wars,” the United States demobilized. ASW was not practiced, and new technology was not developed to deal with a then-nonexistent submarine threat in some inconceivable future war. Then, in 1939, the sudden and surprising start to World War II found the Allies ill-equipped to deal with the menace from German submarines in the Atlantic. The time and effort needed to rebuild the instruments of war and retrain crews in the art of ASW proved costly in Allied blood and treasure. By the time the Allies turned the tide in their favor, German wolfpacks had nearly starved the British into defeat.

This cautionary tale served to educate a generation of warriors who were trained to counter the threat of Soviet submarines during the height of the Cold War. One of the main points of this history lesson was that training and continued research and development to field better ASW systems were good investments. If a major war should come again, the United States and its allies would be ready to counter the threat from below on day one. A decade after the end of the Cold War, a changing world almost led the U.S. Navy to forget this lesson.

When considering the context of the age, we might forgive the leaders of the post-Cold War era for drawing down forces and cutting budgets to focus on other national priorities. Although low in casualties when compared to World War II, the Cold War exacted a tremendous price as nations bore the cost of advanced weapons and large standing armies and navies.

The flight log books for many in this post-Cold War generation of MPA aircrews would record many more hours flying overland reconnaissance missions than traditional maritime patrols. Most post-Cold War VP crews would log hundreds of overland combat reconnaissance missions in endless wars from 1990 to 2010. This tasking provided important ISR to joint forces operating in combat zones but did little to hone aircrew ASW skills. In short, by 1999, P-3s were better known to joint warfighters as good overland ISR platforms than sub hunters. Demand for ISR from combatant commanders and the needs of a nation at war in distant landlocked countries made ASW a hard sell in the 1990s and 2000s.

This context is what made a generation of VP community leaders appear out of touch with geopolitical reality, pushing ASW as a training priority while their crews deployed to provide video surveillance of overland targets in response to the latest intervention, conflict, or crisis. In the heat of the moment it appeared that ASW did not matter. Some community leaders believed otherwise. Now-retired Rear Admiral Ken Deutsch, former Patrol and Reconnaissance Wing Five commander, and former commander, Task Force 57 (CTF-57) and CTF-72 during OEF and OIF, believed that in the future submarines would be true asymmetric threats that would challenge the ability of naval forces to operate where and when they chose. As new technology—such as air independent propulsion—proliferated, the cost of entry into the first tier of naval powers became cheaper and easier, and only trained and tested ASW forces would be able to maintain control of the maritime battlespace.

As Admiral Deutsch observed, “There was also a sense that while the overland mission was primary during the time frame that stretched from Bosnia to Somalia to OEF and OIF, that this mission easily could become one that was only accomplished in a permissive environment—that future conflicts would not be an option for the MPRA [maritime patrol reconnaissance aircraft] community—mainly due to lack of air superiority.”4 He believed that “when these two themes converged, it was clear that ASW would again be the MPRA community’s primary mission, and the community would, in concert with the U.S. submarine fleet, be the only forces able to place and hold enemy submarines at risk.”5

There would always be other platforms that could perform the overland surveillance mission, but there was only going to be one community that could perform the long-range high-endurance air ASW mission, and that the MPRA community had better be ready when the nation called. That the overland mission came along when it did, with the unique capabilities the P-3 brought to the fight, allowed the community to survive during the budget fights of the late 90s and early 2000s, but the overland mission was a priority only absent a higher priority naval mission, especially the ASW mission. Clearly, no other platform was ever again going to be prepared to fight the air ASW mission—we had to be ready when called upon. That meant we had to train and develop new tactics alongside the current missions and that we had to keep the ASW requirements in the mix when it came time to develop and budget for capability.6

Just how did the Navy MPA community overcome budget woes and replacement program cancellations? Captain Liedman writes, “I think the most dangerous time for the VP community since the end of the Cold War was during the 2009 timeframe when the VP fleet was at its low-water mark for aircraft inventory of only 49 mission aircraft due to a fatigue life crisis that began in 2003. There were voices outside of the community who were advocating for the community to further shrink to only nine or even six squadrons because that was all the aircraft inventory could support.”7 Fortunately, MPRA leaders succeeded in making the case that the P-8 was coming and the Navy would need 12 squadrons in the future.

Relevant to this discussion, the U.S. Constitution states, “The U.S. Congress shall have the power to provide and maintain a Navy.”8 The founding fathers’ use of “maintain” is significant. Then, as now, a fleet cannot be built on short notice to respond to a crisis. Like the ships, aircraft must also be maintained. Included in the maintenance of national defense capabilities are the complex tactics, specific knowledge, training, and practice needed to succeed in war.

Beyond the timely tactical benefits that this next-generation maritime patrol aircraft offers to the fleet, the P-8 Poseidon’s story reinforces the lesson that the past is indeed prologue. Those who held the MPA community helm steady at a time when many believed ASW did not matter have been proven visionary by world events and near-peer competitors once again sending capable submarines to sea.

Commander Dolan teaches Strategy & War with the Naval War College’s Distance Education program and history as an adjunct professor at the University of Maine. He is a former EP-3E/special mission P-3 naval flight officer, and contributor to USNI News, Proceedings, and Proceedings Today.