Much has been said about the 2013 white paper Strategic Landpower: Winning the Clash of Wills, a joint concept by the Army, Marine Corps, and Special Operations Command (SOCOM). Many view it as an attempt to influence the Department of Defense budget, but strategic land power also provides a valuable opportunity for Navy surface warfare. The principles of conflict prevention, shaping operations (building multinational partnerships and increasing capabilities), and the human domain (physical, cultural, and social environments) are already aligned with the core missions and capabilities of the Navy. Now they need to be further developed to ensure inclusion in this joint discussion.

With more than 80 ships deployed daily during normal operational tempo, the Navy and surface Fleet are well positioned to take advantage of many principles in the paper. Ships already provide a global presence and can capitalize on the human domain and strategic land-power missions, in a way that is very close to the core capabilities outlined in A Cooperative Strategy for 21st Century Seapower. These missions represent what the surface Navy already does every day in port calls around the world. Still, we can do more.

The white paper stresses the benefit of a small footprint, specifically SOCOM, Marine Corps, and Army forces. What is missing is any mention of conventional Navy options to build partnerships and interact globally through small, non-permanent footprints in foreign countries. Ships and their crews, including embarked Marines, provide this. The surface Fleet is capable of strategic land power if it is properly supported by the following factors:

• Build regional expertise of U.S. sailors through tours, social, and sporting events with host-nation partners. Ships should conduct return visits to ports and countries. Consideration should be given to aligning homeports with specific countries and ports.

• Connect and work with other U.S. services and organizations in given regions.

• Actively and aggressively pursue foreign interaction. Rather than passively awaiting volunteer opportunities offered by the Department of State through embassies, numbered fleets and afloat senior leadership should actively engage with the State Department to select port-visit locations and schedule a much larger number of meaningful volunteer and partnership opportunities.

It may seem like heresy to say this, but liberty port visits have become relics of the past and should be abandoned. They ignore maritime-strategy principles and are fiscally irresponsible, offering scant volunteerism and partnership events. True liberty port visits represent missed opportunities. Currently we promote these outings as if they were important for building partnerships. Imagine the effect if instead we volunteered, served, and became engaged in working ports that focused on specific U.S. strategic goals. The visits could still be enjoyable and rewarding, while providing sailors with much-needed breaks from shipboard life and their routines. This concept would allow for real partnerships and more in-depth exploration of foreign cultures. Port visits are expensive, but they can be cost-effective if mission objectives are accomplished.

Instead of ignoring the strategic land-power debate, the Navy should welcome Army, Marine Corps, and SOCOM efforts to develop and make the case for it. By making all port visits into theater security-cooperation opportunities, we can position surface warfare at the center of strategic land power while other organizations work to incorporate the new standard DOD vocabulary and strategy. As they catch up, we can be improving on the implementation of what we already do. 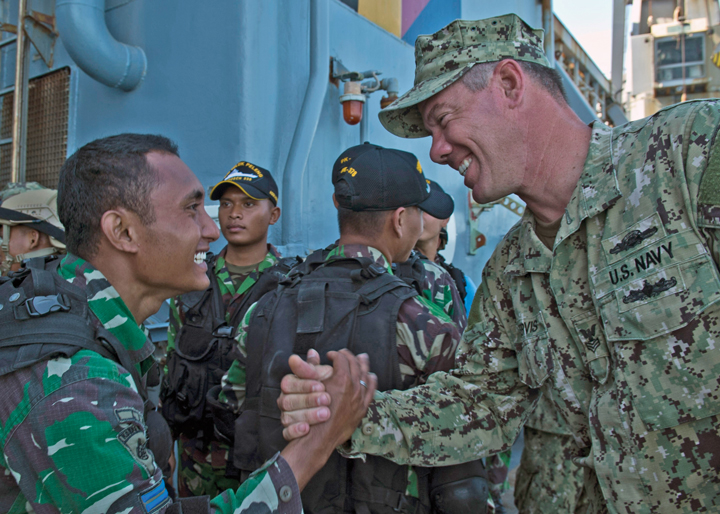