Naval History Magazine
Pieces of the Past
View Issue
Comments

Throughout history, naval leaders have been honored on coins and commemorative medallions intended for collectors. A few have even risen to rule their nations.

Marcus Vipsanius Agrippa was born about 63 BC. His lifelong friend, Octavian, became the Emperor Augustus. They fought side by side in the civil wars that destroyed the Roman Republic. Agrippa commanded the fleet that crushed the forces of Mark Antony and Cleopatra at the 31 BC Battle of Actium. (See “Lovers, War Galleys, and the Rise of an Empire,” December 2021, page 9.) In the year 40 AD, Emperor Caligula issued this handsome bronze coin honoring his grandfather. On the coin, Agrippa wears the “rostral crown,” a metal headband adorned with rams of warships. The reverse depicts the sea god Neptune, with his trident, holding a small dolphin. 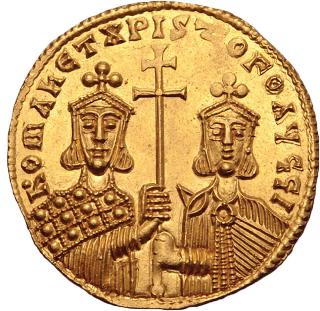 Born about 870, Romanos Lekapenos rose through the ranks of the Byzantine Navy to become Admiral of the Fleet (Droungarios tou ploimou). He was crowned as co-emperor in 920, and his daughter married young Constantine. An effective ruler, Romanos placed his own image on the coinage, alongside that of his son-in-law Constantine.

Born in 1545 to a family of the Korean scholar-gentry, Yi Sun-sin fought successfully on the kingdom’s northern borders, rising to high rank. When Japan invaded Korea in 1592, he commanded a fleet that fought, usually outnumbered, in at least 23 victorious engagements. One of his innovations was the “turtle ship,” a cannon-armed vessel covered with a rounded deck studded with spikes to deter boarders. Yi was killed in action in 1598. The modern South Korean destroyer Chungmugong Yi Sun-sin is named in his honor. His portrait appears on the current South Korean 100 won coin (worth about 7 cents). 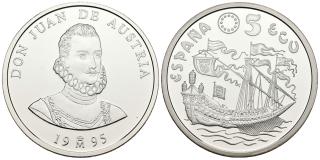 The illegitimate son of Habsburg Emperor Charles V, Don Juan was born in 1547. He served in the fleet of his half-brother, King Philip II of Spain, eventually being appointed “Captain General.” In 1570, the Turks invaded Cyprus, and Pope Pius V organized a Holy League of Spain and the Italian states. Don Juan commanded a combined fleet of more than 200 galleys and six powerful galeasses that defeated the Turks at the great 1571 Battle of Lepanto. In 1995, Spain issued this silver coin bearing Don Juan’s portrait, and an image of his flagship. 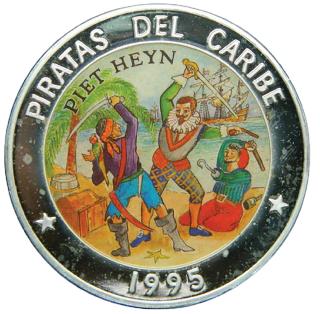 Born in 1577 in Rotterdam (today one of the world’s greatest seaports), Piet Heyn was the son of a sea captain. He went to sea as a teenager, although he suffered from seasickness. Captured by Spain, he survived years as a galley slave, learning fluent Spanish. In 1623 he was appointed vice admiral of the new Dutch West India Company, fighting Spain and Portugal in the Americas. At the 1628 Battle of Matanzas Bay off the northern coast of Cuba, Heyn captured a Spanish treasure fleet, laden with silver, gold, and valuable trade goods. The loss nearly bankrupted Spain. In 1995 he was depicted in action on this colorful Cuban 50-peso coin, one of a series honoring “Pirates of the Caribbean.” 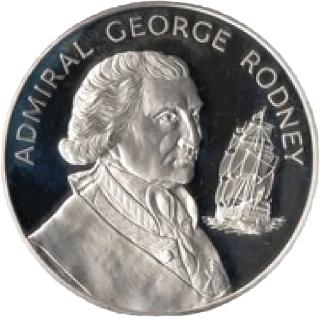 Born in 1718, George Rodney joined the Royal Navy at the age of 14. In the War of the Austrian Succession, he grew rich on prize money, buying a country estate and pursuing a career in Parliament. He returned to naval service in the Seven Years’ War but ran up such large debts that he had to flee Britain. In a French jail when war with England resumed in 1778, he managed to secure his release. On 16 January 1780 he defeated the French at the Battle of Cape St. Vincent. His greatest victory came at the 1782 Battle of the Saintes, forcing the French and Spanish to abandon a planned invasion of Jamaica. Jamaica commemorated Admiral Rodney on this ten-dollar silver coin in 1977. 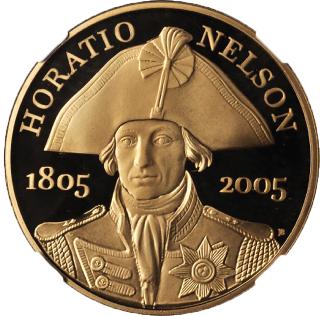 Born in 1758, Horatio Nelson joined the Royal Navy in 1771 as an ordinary seaman—and rose to become Britain’s most celebrated naval hero. On 21 October 1805, he died in action at the decisive Battle of Trafalgar. In 2005, in honor of the 200th anniversary of the battle, the United Kingdom issued gold and silver commemorative coins bearing Nelson’s portrait. 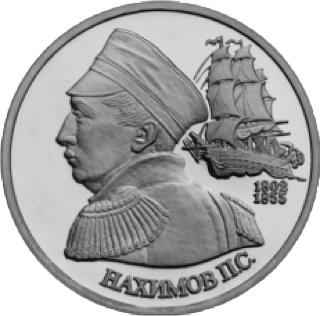 Born to a large aristocratic family in 1802, Pavel Stepanovich Nakhimov entered Russia’s naval academy in 1817. He served as a gunnery officer in the 1827 Battle of Navarino (See “Twilight of the Oak-and-Canvas Gods,” October 2021, p. 9.) During the Crimean War he commanded a Russian squadron that annihilated the Ottoman Black Sea fleet at Sinope in 1853. He was fatally wounded by a sniper during the siege of Sevastopol. His portrait appears on a Russian one-ruble coin issued in 1992. The Kirov-class battle cruiser Admiral Nakhimov bears his name. 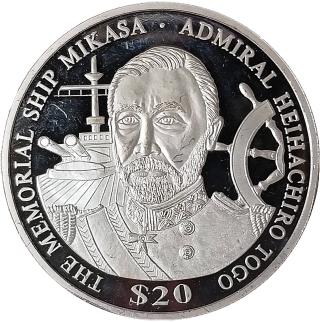 Born to a samurai family in 1848, Heihachiro Togo went to sea on a steam warship in the civil war that ended the rule of the Tokugawa shoguns in 1869. During the Sino-Japanese War he commanded a cruiser and was promoted to rear admiral in 1895. Commanding the Combined Fleet during the Russo-Japanese War, he fought the Russian Pacific Fleet in the 1904 Battle of the Yellow Sea and destroyed the Russian Baltic Fleet at the decisive 1905 Battle of Tsushima. Admiral Togo’s portrait adorns this Liberian 20-dollar coin issued in 2005 to mark the 100th anniversary of Tsushima. 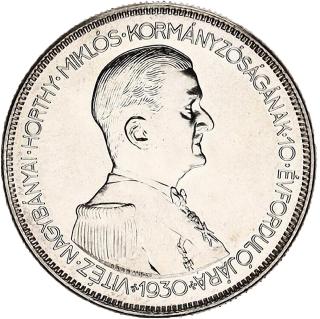 Miklós Horthy de Nagybánya was born in 1868 to an aristocratic Hungarian family. He commanded the Austro-Hungarian fleet against the Allies in the victorious 1917 Battle of the Otranto Strait. His profile portrait in uniform appeared on a series of large five-pengö silver coins issued from 1930 to 1943. 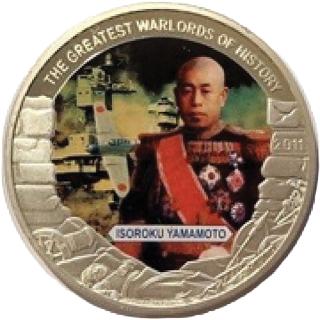 Born to a samurai family in 1884, Isoroku Yamamoto was wounded at the Battle of Tsushima. He attended Harvard University and served as Japanese naval attaché in Washington, D.C., becoming fluent in English. He opposed Japan’s invasion of China and its alliance with the Axis before World War II. Promoted to Admiral in 1940, Yamamoto commanded the Combined Fleet in the Pearl Harbor attack and the subsequent carrier battles. His colored portrait appears on this Liberian five-dollar coin issued in 2011. 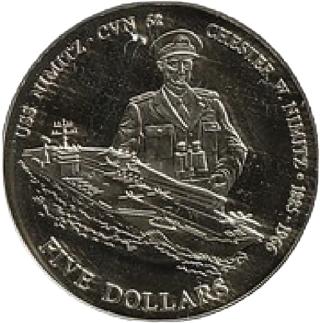 Born in 1885 in Fredericksburg, Texas, Chester W. Nimitz graduated from the U.S. Naval Academy in 1905. After the Japanese attack on Pearl Harbor, he became Commander-in-Chief, Pacific Fleet, and in 1944 he was promoted to the newly created rank of Fleet Admiral. The aircraft carrier USS Nimitz (CVN-68) bears his name. His portrait appears on this 2001 Liberian five-dollar coin, alongside an image of the carrier.

NH Pieces of the Past

The National Museum of American History has several artifacts from the Imperial Japanese Navy’s 7 December 1941 surprise attack on Pearl Harbor.
NH Pieces of the Past

When Lieutenant (junior grade) Corwin Mendenhall Jr. received word that he had been promoted to lieutenant, he was a long way from a Navy uniform shop.
NH Pieces of the Past