Escape from Java: The Extraordinary World War II Story of the USS Marblehead 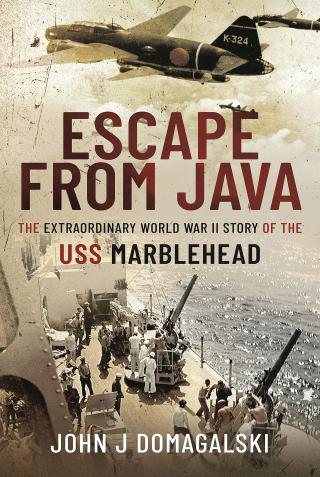 On 28 April 1942, the airwaves carried the familiar voice of President Franklin D. Roosevelt as the Commander-in-Chief spoke to the American people with news of the war. A master storyteller, the President told the inspirational tale of Lieutenant Commander Corydon Wassell, a Navy physician, who oversaw the care of a dozen wounded sailors off the cruisers USS Houston (CA-30) and Marblehead (CL-12). Although the American public had learned the Houston had been lost in combat, the fate of the Marblehead would not be fully disclosed until a week later, when the damaged scout cruiser arrived in Brooklyn to undergo repairs and modernization.

It is the Marblehead’s journey halfway around the globe, the events that necessitated that journey, and the major substory of Dr. Wassell’s heroic efforts to extract his patients from a Dutch hospital deep within Java’s interior before a Japanese arrival that are the focus of John Domagalski’s Escape from Java (see “A Most Extraordinary Devotion to Duty,” February 2021, pp. 40–47).

Domagalski has treaded in these waters before, having written on Lieutenant John Bulkeley’s PT boat operations out of the Philippines at the onset of the war. His appreciation for this theater during this time shines through in the context he provides in discussing the various command relationships between the U.S. Asiatic Fleet commander, Admiral Thomas C. Hart, and his Dutch, British, and Australian counterparts, which at times seems to pad the basic narrative.

As for that narrative, the scout cruiser Marblehead, commissioned on 8 September 1924, saw service in the Atlantic and Pacific oceans as well as the Caribbean Sea. Domagalski provides an excellent overview of the ship’s design and capabilities, pointing out the Marblehead’s unusual gun arrangements and early obsolescence. Assigned to the Asiatic Fleet in 1938, the Marblehead was anchored at Tarakan, Borneo, under the command of Captain Arthur Robinson, when news spread of the Japanese attack on Pearl Harbor.

The next two months is a story of evasion as the Japanese rapidly advanced toward the Malay Barrier—a string of islands that served as a defensive shield for Australia. Robinson’s ship provided cover to destroyers that ambushed an enemy convoy on the night of 24 January 1942 (see “First Strike,” February 2022, pp. 26–33). However, on 4 February, Japanese shore-based naval aviation caught a Dutch-American surface action group aiming for a repeat performance against another Japanese convoy sighted at the southern entrance of the Makassar Strait. Two bombs and a near miss put the Marblehead out of action and in need of massive repairs back in the United States. The Houston also sustained a bomb hit but remained a capable combat unit, as detailed in the late James D. Hornfischer’s Ship of Ghosts: The Story of the USS Houston, FDR’s Legendary Lost Cruiser, and the Epic Saga of Her Survivors (Bantam, 2002).

Unfortunately for Domagalski, the Hornfischer book set the bar quite high regarding what can be done with this type of narrative. Whereas Domagalski identifies crew members with perhaps a reference to a home state, Hornfischer goes more in depth about them in a way that engages the reader to connect with them as people. Looking at the bibliographies of the two books, the availability of a large collection of Houston veteran oral histories completed in the 1970s by the University of North Texas was Hornfischer’s game-changer. Added to that, Hornfischer’s craftsmanship as an author is hard for anyone to match. He is missed.

Hornfischer aside, Domagalski puts the primary and secondary sources at his disposal to good use as the crew endured and overcame numerous challenges to keep the ship afloat and restore steering. Demonstrative of the crew’s innovative cleverness was to use an undersized floating dry dock at Tjilatjap, Java, to first raise the Marblehead’s bow and then her stern to locate and patch sources of leaks. Unlike the Houston, the Marblehead does make it home, despite numerous Japanese claims to the contrary. That the ship inspired two books, a movie, and much media attention only goes to confirm that Domagalski chose his subject matter well. He is to be commended for bringing the Marblehead back to life.

Dr. Winkler is the staff historian with the Naval Historical Foundation.

Experts review Who Can Hold the Sea, and other new and noteworthy books.
NH Book Reviews

Experts review Victory at Sea and other new and noteworthy books.