Skip to main content
The Buchanan is seen early in her career laying down a smokescreen during exercises, circa. 1919–22.
Naval History and Heritage Command

Of the 273 iconic four-stack destroyers of three World War I–era classes, several gained fame during the later global conflict. Among them, the USS Reuben James (DD-245) was the first U.S. ship sunk by Nazi Germany, and the Ward (DD-139) fired the opening shots during the Japanese attack on Pearl Harbor. The most famous, however, is virtually lost to U.S. Navy history. Perhaps that is because, when the ship made her mark, she was serving under a different flag with a new name. 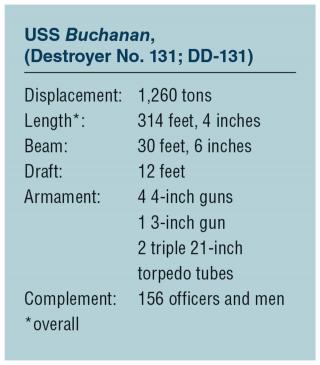 The USS Buchanan (Destroyer No. 131) was laid down on 29 June 1918 at Bath, Maine, by Bath Iron Works; launched on 2 January 1919; and commissioned at Boston Navy Yard on 20 January 1919. Her interwar service was relatively unremarkable. In the immediate post–Great War years, the regimen was training followed by more training. There were some diversions from that staid routine, however.

In May 1919, the warship was part of the plane guard for the transatlantic flight of Curtiss NC flying boats, famously completed by NC-4. In July, she escorted the transport George Washington (Id. No. 3018) into New York Harbor as she returned President Woodrow Wilson from the Paris Peace Conference. In mid-month, she departed New York for the Pacific Fleet, and on 17 July 1920, she received a new designation—DD-131. She operated along the West Coast for two more years before being decommissioned at San Diego.

The Buchanan remained in reserve status until she was recommissioned on 10 April 1930. She then operated with the Battle Fleet out of San Diego, participating in Fleet Problems XIII and XIV before a brief spring 1934 sojourn in the Caribbean. She participated in two more Fleet Problems—XVI in May–June 1935 and XVII in May–June 1936. Between these, for two weeks in November 1935, the Naval Research Laboratory used her and two sisters in camouflage tests. On 9 April 1937, she once again was decommissioned at San Diego.

In response to the 1 September 1939 outbreak of war in Europe, President Franklin D. Roosevelt ordered an immediate expansion of the Navy and the establishment of the Neutrality Patrol. The Buchanan and her sisters of the reserve fleet were reactivated to answer the call. She was recommissioned at the end of the month. By January 1940, she was on patrol with the Antilles Detachment out of San Juan, Puerto Rico. Through early September, her base of operations changed as she operated in the Gulf of Mexico, the Caribbean, the Florida Strait, and off the Virginia Capes.

On 5 September, she sailed from the United States for the last time under a U.S. flag for Halifax, Nova Scotia. On the 9th, the Buchanan was decommissioned and turned over to the Royal Navy as one of 50 U.S. four-pipers exchanged in the “destroyers for bases” agreement. She was stricken from the Navy List on 8 January 1941.

In the Royal Navy, the destroyer was renamed HMS Campbeltown, honoring towns in England and Florida. The other 49 destroyers were similarly renamed for cities and towns in both nations. By the end of the year, she was assigned to an escort group at Liverpool guarding the Western Approaches to the British Isles. A December collision dry-docked her through March 1941. She returned to escorting convoys, which she did through the end of February 1942. Then her life—albeit with only 28 days remaining—got interesting.

While Britain obtained the U.S. destroyers to protect its sea lines of communication against U-boats, the 15-inch guns of the German battleship Tirpitz kept the Navy Ministry up late. Barely a year earlier, the Royal Navy had sunk her sister ship, the Bismarck. Concerned about a possible Tirpitz breakout into the North Atlantic, the British sought to pen her in Norwegian waters. There was only one dry dock on the French Atlantic coast capable of servicing the Tirpitz: Louis Joubert Lock, also known as the Normandie Dock, in St. Nazaire. It was built to handle the French ocean liner of the same name. If the lock/dry dock could be rendered useless, the Tirpitz could not move west with any hope of support. Its destruction held a further bonus. Because the lock regulated the water depth in the port’s large basin, which otherwise would be susceptible to a large tidal range, it allowed the Germans to base U-boats there. With a useless lock, the tides would limit submarine operations from the port.

The British devised Operation Chariot, a plan to ram a ship against the lock’s outer gate and then blow her up along with the gate. The ship was to be supported by smaller vessels carrying Commandos to destroy dockyard infrastructure. St. Nazaire was strongly defended, with most heavy weapons guarding the circuitous deep ship channel that followed the north shore. Outside the channel, especially to the south, were dangerous shallows. The British chose to avoid the main channel, but with the risk of running aground in the less heavily defended shallows. The best time was the night of 28 March 1942 during the spring high tide.

With little time to prepare—from conception, the whole operation spanned just seven weeks—the Campbeltown was selected as the attack ship. She was gutted internally to reduce draft for the shallows. Her bow was reinforced back to the forward gun mount foundation in the hope that would help the ship ride up over the gate. Behind the protection of the mount foundation, a concrete and steel box was constructed consisting of six cells separated by walls of more concrete and steel. The cells, two across the beam and three fore to aft, each held four Mk VII depth charges, for a total of 24 with 7,200 pounds of amatol explosive. The box was capped with a steel and concrete lid. One depth charge in each cell received a timed fuse with an eight-and-a-half-hour delay.

The destroyer was stripped of unnecessary ammunition and fittings. She carried only enough fuel and water for a one-way trip, but to maintain a ruse after the ship had run onto the gate (the delayed fuses were to activate about six hours after the attack), ship’s stores and the galley were stocked as if for a return voyage. Her torpedo tubes, main armament, depth charges, and launchers were removed. To give her the silhouette of a German Möwe-class torpedo boat, the ship’s two aft funnels were cut down and blanked off. The fore stack was enlarged, the second funnel shortened, and both forward funnel tops cut back at an angle. To prevent torpedo nets from fouling her screws, a large hook was fitted to the base of her stem to trap and drag them.

The destroyer was rearmed with eight 20-mm Oerlikon cannon. A 12-pounder was moved to the fo’c’sle, and two Browning .50-caliber machine guns were mounted on either end of the bridge. Commandos manned 3-inch mortars on both sides of the foredeck. Four rows of armor plate were welded amidships to provide protection for the Commandos, while the wheelhouse was encased in splinter mats and quarter-inch armor with vision slits for the captain and helmsman. For camouflage against searchlights, she was painted in a “dusky shade of mauve known as Plymouth, or Mountbatten, Pink.”

The Campbeltown, 16 motor launches, a motor torpedo boat, and a motor gun boat sailed from Falmouth on 26 March. Shortly after midnight on the 28th, they entered the Loire River estuary about 11 miles from the lock. By 0100, the vessels had been spotted, but the report was dismissed. At 0120, they were two miles from their target. Up to 0128, signals from the flotilla based on British intelligence information confused German gunners. At that time, however, they fully opened fire and the Campbeltown replaced her German flag with the White Ensign. She was repeatedly hit, and the smaller vessels took a beating. At 0134, four minutes behind schedule, the destroyer, making 20 knots, cut through protective torpedo netting and hit the lock caisson dead on, her momentum carrying her onto the 27-feet-thick outer gate.

As the sailors completed the process of scuttling the ship to prevent her from being towed away, the Commando parties streamed down ladders to quickly silence defenses. They then began demolition of shore facilities.

Meanwhile, the “Little Ships” continued to bear the brunt of enemy fire outside the lock. Nine were sunk, four scuttled, and one captured. Only four would return to England. For the landed Commandos, escape by boat was now impossible. They chose to fight their way out with the vain hope of escaping to the south and Spain and then Gibraltar. They made a valiant attempt, but by daybreak, their groups had broken up and the raiders were captured or shot. Five, however, evaded those fates and would return to the United Kingdom.

Once the shooting stopped, German naval personnel began inspecting the Campbeltown. Soon, more people, even some civilians, were exploring the wrecked ship. But apparently no one inspected the concrete box. The delayed fuses were not perfect. Instead of going off at 0900, an enormous explosion ripped through the ship and the lock caisson beneath her at 1035. The gate virtually disappeared, and the force of inrushing water pushed the stern of the ship into the dry dock. Two days later, delayed-action–fused torpedoes launched by a motor torpedo boat against a different basin lock gate exploded, capping the successful mission.

The costs were high. Of 611 men who began the mission, 169 were killed—105 Royal Navy personnel and 64 Commandos. Five Victoria Crosses were awarded along with 80 other gallantry decorations.

The Normandie Dock remained out of commission for the remainder of the war and was not fully operational until 1950.

By J. M. Caiella
With a service life of just 54 days, the screw sloop Adirondack had little time to make an impact on history.
NH Historic Ships

By J M. Caiella
The 36-gun ship Constellation was one of the first six frigates of the new U.S. Navy, which was created in 1797.
NH Historic Ships

By J. M. Caiella
The patrol craft PC-467 was one of 319 commissioned PCs built at 16 shipyards around the nation.