Movies and history should never be confused. In film, history always takes a back seat to the story line, no matter how dramatic the true events were. Film also has time and money constraints and features the anachronistic use of current equipment in a historical narrative. For instance, in John Wayne’s 1965 movie In Harm’s Way, the cruiser USS St. Paul (CA-73) was used to depict a number of prewar cruisers sunk in the early years of World War II.

Recently, the Public Broadcasting Service aired the miniseries Atlantic Crossing, a fact-based but fictionalized depiction of the relationship between Norwegian Crown Princess Märtha and President Franklin D. Roosevelt. Woven into the story is a little-remembered event involving a small U.S. ship, PC-467. The patrol craft, laid down on 22 October 1941 and commissioned on 20 June 1942, was one of 319 commissioned PCs built at 16 shipyards around the nation. Her U.S. Navy service spanned less than three months.

As historic ships go, the 450-ton sub chaser was one of the many smaller warships that did unheralded, but extremely valuable, yeoman’s work escorting convoys and patrolling coastal waters for submarines. Indeed, PC-467’s naval service for two countries was unremarkable. But she did make her mark at a most desperate time as a symbol of U.S. commitment to a small nation and its sovereignty. She also served as the backdrop to one of Roosevelt’s more noteworthy wartime speeches. 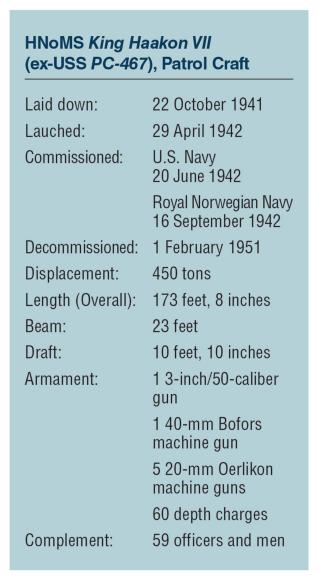 By mid-1942, Norway had been overrun by Nazi Germany, its royal family was in exile, and the King and Crown Prince were leading efforts to keep their country in the war and gain the major Allies’ support. Meanwhile, Roosevelt had become concerned about international morale. His attempts to bolster alliances included the donation of a U.S. warship to the people of Norway. The miniseries claims the ship was a destroyer, but she was in fact PC-467.

On 16 September 1942, the patrol craft was transferred to the Norwegian Royal Navy in a ceremony at the Washington Navy Yard. The ship was delivered to the Crown Princess by Roosevelt. The President followed the presentation with his historic “Look to Norway” speech, in which he “asserted the strength and legitimacy of the exiled Norwegian government, the importance of a U.S. diplomatic alliance with Norway, and the heroic spirit of the citizens of that nation.”

As the Norwegian flag was raised at her stern, PC-467 became HNoMS (His Norwegian Majesty’s Ship) King Haakon VII, named for the then-current monarch.

Atlantic Crossing’s depiction of the ceremony shows mostly deck views of the ship, but there is one brief flash, perhaps no more than a second or two, of the bridge and forward guns. The superposed turrets confirm the ship is a destroyer, and their unique shape marks them as the prewar twin Mk 22 5-inchers carried by either the Porter- or Somers-class ships. That shot is obviously computer generated. Why then not use something that more accurately reflects the PC? It just as easily could have been created. Most likely it was to maintain the destroyer narrative. But there were better choices for doing that.

In service with the Norwegians, the patrol craft was initially assigned to the Canadian Coastal Zone based at Halifax, Nova Scotia. Later she moved to Red Bay, Newfoundland and Labrador, from which she took part in the escort of eastbound transatlantic convoy SC-108. The small ship suffered damage during the voyage, and after a period in the United Kingdom, she returned to St. John’s, Newfoundland, in May 1943. From there for the rest of the war, she escorted coastal convoys from Canada to the Caribbean. She is credited with 85,000 nautical miles of sailing with 79 convoys and no losses.

After the war, she finally went home, arriving on 26 June 1945 at Kristiansand, Norway. She was later designated A-423 and served until decommissioned on 1 February 1951 and laid up at Trondheim. In August 1953, the ship was sold to the Rogaland Sailing School for Boys. While one source indicates she was sold to a whaling firm in August 1957, her fate is unknown.

By J. M. Caiella
The tin can sailors of the destroyer escort USS Kirk (DE-1087) are quick to point out that their primary mission had been to hunt and kill.
NH Historic Ships

By J. M. Caiella
The sinking of the Maine in Havana Harbor on 15 February 1898 was the pivotal event initiating the Spanish-American War.