Among the outstanding combat aircraft of the Cold War era were several Douglas carrier-based attack planes: the AD/A-1 Skyraider, A3D/A-3 Skywarrior, and A4D/A-4 Skyhawk.1 All were designed by Edward Heinemann.2

But what of the A2D Skyshark?

World War II saw major advances in aviation technology, including turbojet and rocket propulsion. But early jets were gas guzzlers and slow in acceleration. A solution was turboprop propulsion that could combine the best attributes of the jet and piston engines. In June 1945, the Bureau of Aeronautics asked Douglas Aircraft Company to develop a turbine-powered attack aircraft, a successor to the highly successful Skyraider prototype—the XBT2D-1—that had first flown three months earlier.3 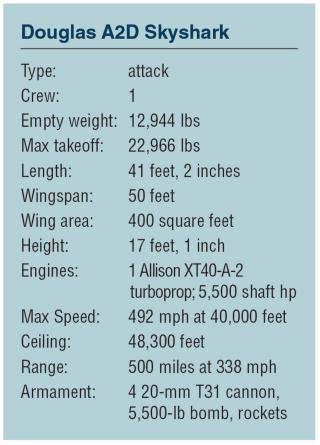 Douglas submitted three designs and, in June 1947, was authorized to proceed with preliminary layouts, wind tunnel tests, and construction of a mock-up. That effort led to a Navy contract on 25 September 1947 for two XA2D-1 prototypes.

Initially the new aircraft was envisioned as a straightforward conversion of the AD airframe merged with the turboprop engine, but it soon became obvious that to benefit from the Allison XT40-A-2 engine—which had twice the horsepower of the Skyraider’s piston engine—a major redesign was necessary. The resulting A2D had only a faint resemblance to its predecessor. Its large fuselage housed the turboprop engine, which consisted of two Allison T38 turboprop engines combined to drive counterrotating, three-blade propellers. In cruise mode, half of the XT40 could be shut down to increase range at the cost of some speed; handling was not affected in one-engine flight.

The aircraft’s planned armament was four wing-mounted 20-mm cannon. There would be 13 hard points under the fuselage and wings to carry a variety of bombs and rockets. Like its predecessor, the AD Skyraider, the A2D had one pilot. He was provided with an ejection seat.

The aircraft’s first flight was made at Edwards Air Force Base, California, on 26 May 1950. Flight trials were conducted by the two XA2D-1 prototypes and six production aircraft. “With the exception of top speed, which fell some ten percent below estimates, performance and handling were promising, and the A2D Skyshark offered substantial improvements over the Skyraider,” wrote aviation historian René J. Francillon.4

However, the turboprop engine suffered from “teething” problems, especially with its complex gear box. Issues with engine reliability caused several accidents. Navy test pilot Commander Hugh Wood was killed in the crash of the first prototype on its 15th flight. Another pilot had to eject when his plane developed engine problems.

The turboprop problems and the outstanding performance of the turbojet A4D Skyhawk led to cancellation of the A2D program. Counting the two prototypes, eight A2Ds had flown; four additional production aircraft were completed, but not flown. Another 339 production models were canceled.

The AD/A-1 Skyraider saw extensive service in the Korean War. Flown by the Navy, Air Force, and South Vietnamese, it also saw considerable combat in the Vietnam War, as did the A3D/A-3 and A4D/A-4 Skyhawk. The A2D never made the team.

By Norman Polmar, Author, Ships and Aircraft of the U.S. Fleet
Nonrigid airships or “blimps” or “gas bags” were a major component of U.S. naval aviation during World War II and through the 1950s.
NH Historic Aircraft

By Norman Polmar, Author, Ships and Aircraft of the U.S. Fleet
During the 1930s and into the early 1940s, the U.S. Navy considered flying boats the key for long-range scouting for the battle fleet.
NH Historic Aircraft

By Norman Polmar
The Convair 440 airliner in military service was a most versatile aircraft.