Skip to main content
The German destroyer Friedrich Eckoldt goes down with all hands in the December 1942 Battle of the Barents Sea—an Allied victory in more ways than one.
Public Domain

The gloom of perpetual twilight, the chill seas and merciless winds that relentlessly cake a ship’s surfaces in sheets of ice—such are the challenging conditions when conducting a naval battle in the Arctic Circle on New Years’ Eve. New Year’s Eve 1942, specifically—when Royal Navy destroyers and cruisers escorting an Allied convoy bound for war-torn Russia ran the gauntlet of a more heavily armed German naval force, fought bravely in the confused and obscure battlescape, and emerged victorious. And in so doing, they inadvertently brought about the demise of the German surface fleet as a factor in World War II.

Adolf Hitler was already jaundiced and skeptical about the worth of his High Seas Fleet when a humble 14-ship convoy designated JW 51B departed Loch Ewe, Scotland, on 22 December 1942. Flying his flag in the destroyer HMS Onslow, Captain Robert St. Vincent Sherbrooke commanded the convoy’s escort force of six destroyers, two corvettes, a minesweeper, and two trawlers.

Meanwhile, Rear Admiral Robert L. Burnett departed Russia with the cruisers HMS Sheffield and Jamaica and a pair of destroyers, ready to meet the convoy when it reached the Barents Sea and provide it cover on the final leg to the Russian approaches.

A German reconnaissance plane sighted JW 51B on Christmas Eve; U-354 likewise spotted the convoy on 30 December. (By then, it had punched its way through two days of fierce gales, and its ships had lost their formation.) From the Kriegsmarine base at Altenfjord at the top of Norway, the pocket battleship Lützow, the heavy cruiser Admiral Hipper, and six destroyers sailed out to kill a convoy.

Vice Admiral Oskar Kummetz split his force to sandwich JW 51B from north and south. At 0820 on 31 December, the British spotted German ships astern. An hour later, the Hipper’s destroyers opened fire. Joined by the destroyer HMS Orwell, Captain Sherbrooke in the Onslow sighted and engaged the Hipper, blasting at the more powerful adversary while making maneuvers that bore the threat of torpedo-firing. The Hipper turned tail, but she worked her way back around and landed a hit on the Onslow. Captain Sherbrooke was wounded by a steel splinter that shattered his cheekbone, nose, and forehead, leaving his left eye dangling. Remarkably, he retained his sang-froid, continuing to calmly command until they were able to get him below and he passed on the reins. (He would receive the Victoria Cross for his actions.) 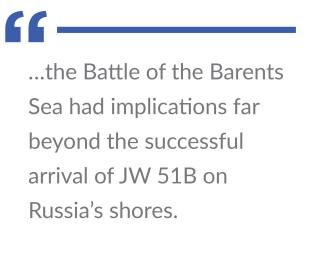 But the convoy’s defenders had learned something key: During the fracas the British destroyers’ torpedo-feint had rattled the adversary. The Germans were operating under restrictive orders that were conducive to an overly cautious approach. When Admiral Burnett’s cruisers Sheffield and Jamaica and their attendant destroyers showed up before noon, the cavalry had arrived. They scored several hits on the Hipper and sank the destroyer Friedrich Eckoldt, and the German force headed west in a hurry. The British had lost 250 men, a destroyer, and a minesweeper. But Convoy JW 51B made it through.

The battle “was one of the finest examples in either of the two World Wars of how to handle destroyers and cruisers in action with heavier forces,” Admiral of the Fleet Lord Tovey later observed. “Captain Sherbrooke saved his convoy by going straight in to attack his far heavier enemy, using his guns to do what damage they could but relying on his torpedoes, the real menace to the heavy ships, to deter them. . . . Sherbrooke knew the threat was lost once his torpedoes were fired . . . the mere threat was sufficient to persuade the enemy to break off their attack.”

And the Battle of the Barents Sea had implications far beyond the successful arrival of JW 51B on Russia’s shores. For it triggered a furious Hitler to rage, “The entire action shows that the ships are utterly useless and nothing but a breeding ground for revolution, idly lying about and lacking any desire to get into action. This means the passing of the High Seas Fleet; it is now my irrevocable decision to do away with these useless ships.”

Save for one subsequent engagement, der Führer kept to his angry word; the German naval effort would be U-boat-centered for the duration—but by the following spring, the U-boat threat was nowhere near what it once had been. Blessedly, a firm grasp of sea power was not exactly Hitler’s strong suit—and a New Year’s Eve miracle had driven him to a fatally rash decision.

Dudley Pope, 73 North: The Battle of the Barents Sea (London: Weidenfeld and Nicolson, 1958).

Last Stand of the Gentleman Pirate

By Eric Mills
Penniless, bereft of options, devoid of opportunities—such are the usual conditions that steer a soul toward a life of outlawry.
NH Classic Sea Fights

Showdown on the ‘Glorious First of June’

By Eric Mills
Revolutionary France was beset by enemies on all sides, dissension from within, and, looming above it all, the specter of famine.