Naval History Magazine
Pieces of the Past
View Issue
Comments 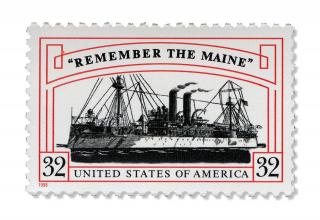 For years after their first appearance in 1847, U.S. postage stamps showed only stern faces of assorted Founding Fathers. Non-portrait stamps, introduced in 1869, included the earliest appearance of a ship (although not a warship), the steamer SS Adriatic. The first Navy ship on a U.S. stamp was not for postage: Internal Revenue tax stamps issued in 1898 bore an engraving of the ill-fated USS Maine. (A century later, the Maine would make her appearance on a 1998 postage stamp commemorating the centennial of her sinking.)

NH Pieces of the Past

By Michael Markowitz
Americans have always been a seafaring people, and U.S. coins reflect that history. The first “ship coins” were minted in 1892 and 1893.
NH Pieces of the Past

By Eric Mills
A movement sprang up to show support for the POWs and those missing in action. The effort grew to be an early-’70s cultural phenomenon: the Vietnam POW/MIA bracelet.
NH Pieces of the Past

By Eric Mills
If you’re a naval-oriented collector, perhaps you own a battleship model, be it a plastic Revell or a handcrafted beauty worth hundreds of dollars.