Skip to main content
A column of Marines marches toward the front line through a defile at the southwestern end of Peleliu's Bloody Nose Ridge.
(U.S. Marine Corps)

On 15 September 1944, the 1st Marine Division landed on Peleliu with its commander, Major General William H. Rupertus, confidently predicting the Japanese-held island would be in U.S. hands within four days. But the grueling Battle of Peleliu would last 73 days, with the U.S. Army’s 81st Infantry Division eventually taking over operations.

Two key factors contributed to the battle stretching so long: The Japanese abandoned large-scale assaults in favor of attritional, defensive warfare, and they had ideal terrain in which to implement their new tactics—the rugged coral and limestone Umurbrogol Mountain, which Marines nicknamed “Bloody Nose Ridge.”

Colonel Lewis B. “Chesty” Puller’s 1st Marines was assigned to capture this high ground. After two-and-a half days of unexpectedly brutal fighting, the regiment reached the southwestern base of Bloody Nose Ridge and began the assault.

What follows is a summary of the conditions under which the 1st Marines fought during its first day on Bloody Nose Ridge as recorded in the regiment’s history of the Peleliu operation, which is available in Record Group 127 at the National Archives in College Park, Maryland.

Results of the day’s battle were viewed with optimism. Not only had the high ground been gained in a general advance all along the line, but some of the stiffest opposition the Japs could put up, from pillboxes, full-scale fortifications, and caves in the ridge sides, had been quickly and efficiently dispatched. Large quantities of enemy armament and ammunition were captured.

But not without cost. The Japanese mortars and artillery had taken their toll, directed by observers who, when they were overrun, were found to be shackled hand and foot to their positions. Enemy machine gunners were lashed to their weapons to obliterate any possible thought of retreat. A careful recapitulation of casualties showed the regiment had lost 1,236 men since D-day. Front-line units were decimated. Two hundred of the 473 total effectives in the Third Battalion were headquarters personnel.

The heat had become an important factor in the fight. A blazing sun, reflected off the white sand and coral, turned the entire arena into a scorching furnace. A few men who had fought desperately for three days in that inferno now began to collapse from heat exhaustion. There were fervent prayers for rain, or at least a cloudy sky to shade the sun. Countless numbers suffered minor discomfort from blistered faces and cracked, bleeding lips. Quantities of salt pills were sent forward until supplies in rear areas were drained. The ragged terrain the regiment had penetrated, with its precipitous slopes on which weary, heavily laden troops expended themselves, contributed to the number of exhaustion victims.

The ground of Peleliu’s western peninsula was the worst ever encountered by the regiment in three Pacific campaigns. Along its center, the rocky spine was heaved up in a contorted mass of decayed coral, strewn with rubble, crags, ridges, and gulches were thrown together in a confusing maze. There were no roads, scarcely any trails. The pock-marked surface offered no secure footing even in the few level places. It was impossible to dig in ... Casualties were higher for the simple reason it was impossible to get under the ground away from the Japanese mortar barrages. Each blast hurled chunks of coral in all directions, multiplying many times the fragmentation effect of every shell. Into all this the enemy dug and tunneled like moles, and there they stayed to fight to the death. 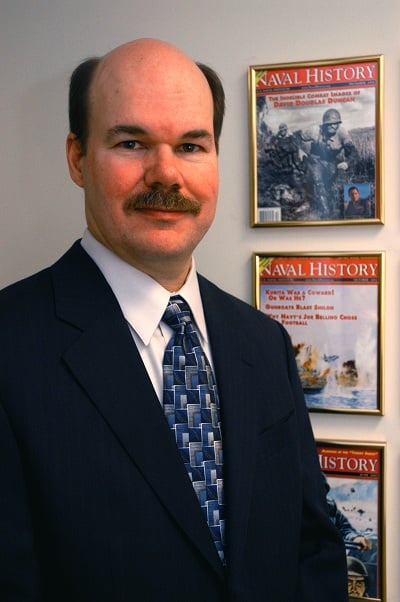 Richard Latture has served as editor-in-chief of Naval History magazine, published bimonthly by the U.S. Naval Institute, since 2005. He received a BA in history from Washington & Lee University and an MA in history from the University of Virginia. After working as a researcher, reporter, and editor at USA Today, he edited MHQ: The Journal of Military History and other magazines published by Primedia History Group.