Skip to main content
A quartermaster takes a sun sighting from the navigation bridge of the USS Alaska (CB-1) in 1945.
U.S. Naval Institute Photo Archive

Navigating to the Sextant

My 20th-century sextant never fails to attract the attention of visitors, whether or not they have an interest in the sea. Some are drawn to the precision of its engineering, others to the elegant shape, with its curving scale and polished mirrors. The design is so perfectly evolved for its task that it has remained largely unchanged for 250 years. If Captain James Cook were to see the one mounted on my wall, manufactured by Heath and Co. of London in the 1950s, he would recognize it instantly.

The story of its development is as old as seafaring itself. From earliest times, mariners have looked to the sky to help find their way. Once land slips below the horizon and open water lies all around, until very recently only the heavens could lead a ship to its destination. The sun, with its predictable track, is a guide during the day, and the stars at night, especially the fixed polestar Polaris in the Northern Hemisphere or its Southern equivalent, the dimmer Sigma Octantis.

As early as 3000 BCE, Phoenician traders used the stars to navigate the Mediterranean Sea and into the Atlantic Ocean. Some of these voyages reached as far south as the Azores and as far north as the Scilly Islands, where merchants bought the tin needed to make bronze.

The ancient Greeks, too, navigated using stars. In Homer’s Odyssey, Calypso gives precise advice to help Odysseus sail away from her island. The Greek hero is told to keep the Bear (Ursa Major) on his left-hand side, while at the same time to observe the position of the Pleiades and the late-setting Orion.

Celestial navigation was not just the preserve of Europeans. While the Phoenicians were venturing into the Atlantic, the Austronesian ancestors of many of the island populations of the Pacific, Southeast Asia, and the Indian Ocean were leaving Taiwan and fanning out across the sea. These epic voyagers would eventually people an area from Hawaii in the north, to New Zealand in the south, and from Easter Island deep in the Pacific, to as far west as Madagascar. These mariners used a range of tools and methods, including star charts often made from sticks and complex songs that recorded important celestial information.

As ocean travel grew in importance, there was a need for more careful observations. Sailors realized that stars could offer more than just the direction of north or south. A star’s altitude above the horizon, for example, related directly to a ship’s latitude. Mariners began to develop tools to measure such factors.

One of the simplest was the kamal, used by Arab navigators from the sixth century on. It was made from a rectangle of board about 2 inches long, to which a string with evenly spaced knots had been attached. The navigator gripped this string with his teeth and moved the board away from him, aligning the bottom edge with the horizon, and the top with the target object, usually Polaris. The number of knots between mouth and board gave a crude idea of relative height.

Although the kamal was useful, it lacked precision, and by the 13th century the mariner’s astrolabe was beginning to supplant it. This was a simpler version of the elaborate devices used by astronomers on shore. It consisted of a brass disc graduated in degrees around its rim, hanging from a ring at the top. A pin passed through the center of the disc, with a pointer, called an alidade, attached to it. The user held it up in front of his face and aligned the disc with the object being observed, again, usually Polaris. The alidade was turned until it pointed at the star, and its angle above the horizon was read off the scale. Marine astrolabes would continue to be used for centuries, despite their drawbacks. They were heavy and cumbersome, particularly on a pitching deck or in windy conditions. They were also of limited precision, which was governed by the (usually short) length of the alidade.

Portuguese explorers venturing toward the Equator in the 15th century needed better, more precise measurement of Polaris’s height to gauge southward progress. The solution was the quadrant. Versions of the device had been around for centuries, but it was not until it was adapted for use at sea that it came into its own. A marine quadrant was composed of a quarter circle (hence the name) of wood or brass with a plumb line hanging from the center. One sailor would sight along the top of the quadrant at a star, while another read the angle where the line crossed a scale. It was a simple, accurate instrument that easily could be manufactured for a modest cost. Its use spread rapidly, and it became the principle navigational aid that explorers such as Christopher Columbus, Vasco de Gama, Francis Drake, and Ferdinand Magellan used during the Age of Discovery. But technical progress is relentless, and soon the quadrant, too, would find itself supplanted.

By the Elizabethan era, the most useful measure for calculating latitude had become the altitude of the sun at noon. But quadrants required the user to sight directly at the object being observed—no easy task, looking at the sun. Explorer John Davis’s solution was to turn the navigator around. With the Davis quadrant—or “backstaff”—the mariner stood with his back to the sun and used the shadow for his observation. He rested on his shoulder a rod graduated in degrees. He slid a half transom along the rod until its shadow fell on a slot through which he was viewing the opposite horizon. The half transom was then locked, and the angle of the sun above the horizon was read off the scale.

Use of the backstaff lasted into the early 18th century, when Enlightenment advances in optics and precision toolmaking revolutionized navigation. In 1731, British scientist John Hadley produced the first reflecting octant (one-eighth of a circle). The Royal Navy adopted it after Admiralty trials, and its use quickly spread. Following a suggested improvement from Captain John Campbell in 1757, the scale was extended from one-eighth to one-sixth of a circle. The “sextant” had arrived.

Compact and precise, the sextant required little more than a steady hand and a good eye to use. The navigator stood facing the sun and looked through a small telescope mounted on the instrument’s frame. Just in front of the telescope was a glass plate, one half of which was clear, and the other half mirrored with silver. Through the clear part he could see the horizon, while a swinging arm with a second mirror fixed to the top permitted him to “bring down” the sun onto the silvered half of the plate. When sun and horizon aligned, the arm was clamped and the angle read off. The user could face the sun, thanks to a series of smoked glass plates protecting his eyes.

The sextant had many other advantages. It was much easier to handle on a moving ship, in bad weather, or in windy conditions. At night, with its smoked-glass filters swung aside, it could be used to observe the height of the moon and stars. Sailors soon realized it had other uses as well, such as measuring the angle between any two points. Using trigonometry, they could check that an anchor was holding, calculate the relative speed of two ships, or assess the distance to an object of known height, such as a lighthouse. A well-maintained sextant is accurate to within a half-minute (about one-half a nautical mile). Small wonder, then, that the sextant remains essentially unchanged today.

But the stars that helped the first navigators sail across open water have today been supplemented by man-made celestial bodies. Global Positioning System satellites provide new reference points in the heavens, able to locate ships, cars, planes, and even mobile phones on the surface of the earth with a degree of precision that no mariner with a sextant can compete with. But I will still keep mine in good working order, just in case. 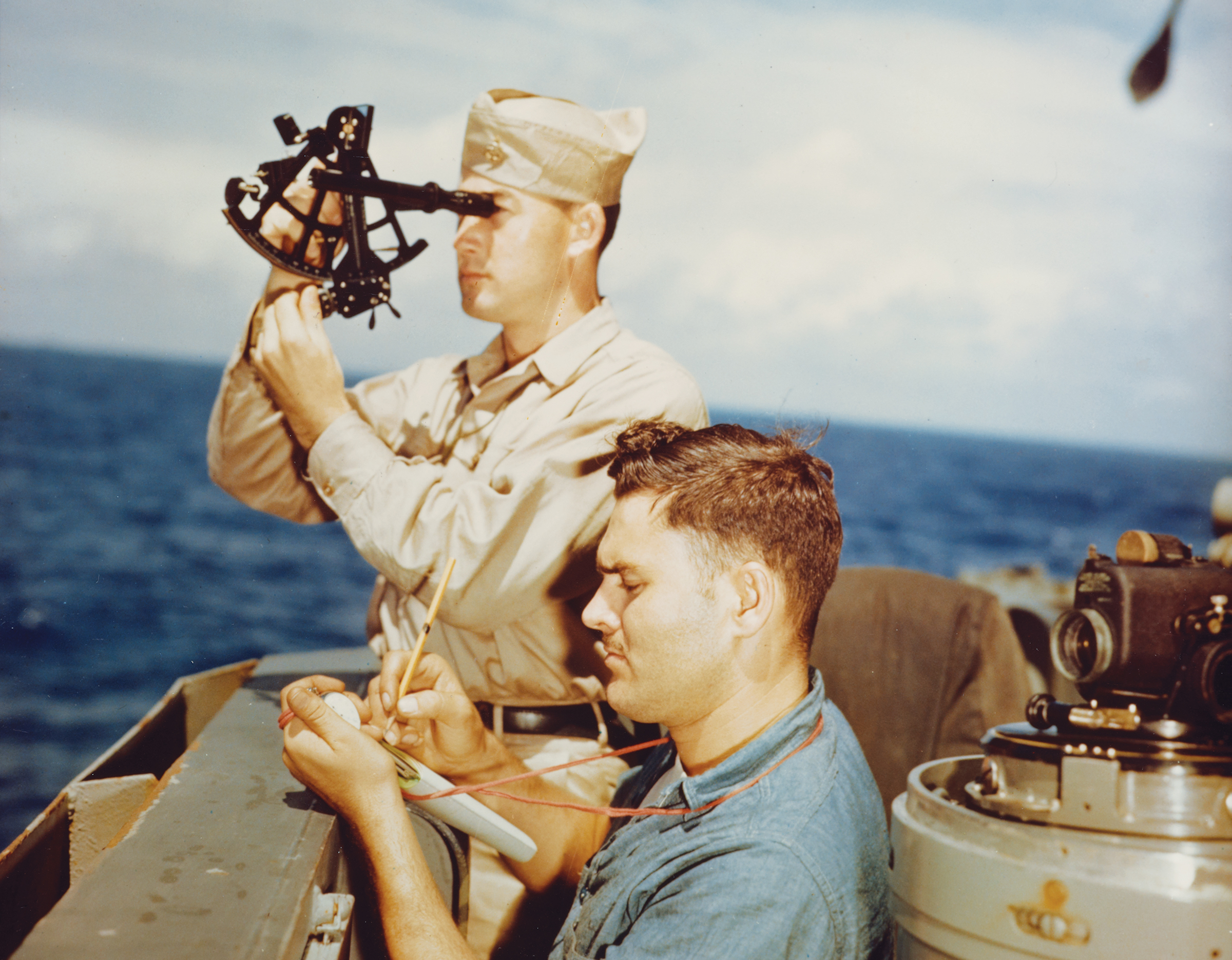 A quartermaster takes a sun sighting from the navigation bridge of the USS Alaska (CB-1) in 1945.
U.S. Naval Institute Photo Archive

Mr. Allan is the author of the award-winning Alexander Clay series of nautical fiction set in the Royal Navy of the late 18th century. He studied the 18th-century navy at the University of London and is a member of the Society for Nautical Research.