In the December 2018 “Bluejacket’s Manual,” we explored finding one’s way around a Navy ship. That system of compartment identification only came into practice in 1949. Ships built before that time used a different method of identifying compartments and spaces.

In the pre-1949 system, each compartment was labeled with a formatted designation, such as:

The first letter gave a rough estimation of the compartment’s location fore and aft. That letter was always A, B, C, or D. Many ships did not include the “D” designation, which will be explained later. We will first consider a ship using only the first three letters, which divided the vessel into three sections, “A” being the forwardmost, “C” being the aftermost, and “B” comprising those compartments amidships. 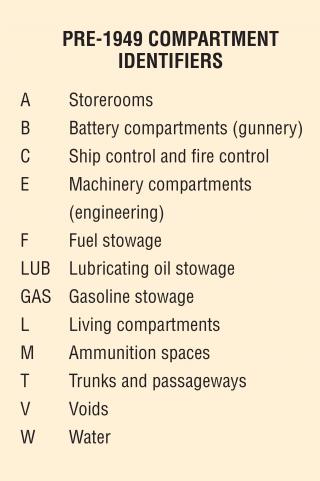 The numbers in the middle of the designation provided information about the compartment’s vertical and horizontal location. The digits combined to indicate what deck the compartment was on and where it was on that deck. Compartments on the main deck—the uppermost deck that runs the whole length of the ship, from stem to stern—had 100-series numbers (101, 102, 103, etc.); those on the next deck below (called the “second deck”) used 200-series numbers; the third deck used 300-series numbers, and so on. No matter how many decks a ship had, those spaces in the ship’s “double bottom” (consisting of the two lowest complete decks) always were given 900-series numbers.

Whether using a three-digit number to indicate the main deck and below, or a four-digit number to indicate spaces above the main deck, the remaining digits indicated the location relative to the ship’s centerline, with those on the port side having even numbers and those to starboard using odd numbers. If the designation ended in zero, it would have been on the centerline.

The third part of the designation was a letter or group of letters that indicated the use (or multiple uses) of the space.

As mentioned earlier, some ships included a fourth major division, labeled “D.” This reflected the very large and redundant engineering spaces that were essential in large warships. In this configuration, “D” was the last section of the ship and divisions “B” and “C” encompassed the engineering spaces. As explained in the 1943 Bluejackets’ Manual:

This convoluted description becomes clearer with the knowledge that boiler rooms and engine rooms were kept separate from each other, and that there often were redundant boilers and turbines for added power and in the event of battle damage. For example, a heavy cruiser would have her boilers configured beneath her stacks in section “B” of the ship, and her turbines, reduction gears, and condensers in section “C.”

Lieutenant Commander Cutler is the Gordon England Chair of Professional Naval Literature at the U.S. Naval Institute. His many books include The Bluejacket’s Manual (Naval Institute Press), a copy of which every U.S. Navy enlistee receives.