Skip to main content
The USS Supply is depicted by W. R. May as she appeared during her service with Commodore Matthew C. Perry’s Japan expedition.
U.S. Naval War College

Warships, by their nature, define naval history. But myriad other ships help constitute the world’s navies, and they, too, have their own stories. Consider a supply ship with an uninspired name: the USS Supply.

Boston merchant William Goddard built the ship-rigged sailing vessel in 1846 at Medford, Massachusetts. Named the Crusader, the commercial ship was purchased by the Navy for $60,000 later that year for service in the Mexican War as a stores ship. She was delivered on 8 December and renamed and commissioned on the 19th. After her war service, in late November 1847, the Supply set out for the Levant with Lieutenant William F. Lynch’s expedition to the River Jordan and the Dead Sea on board.

In late 1849, she assisted with the migration to California in the wake of the gold rush. Her next assignment was to the East India Squadron in support of Commodore Matthew C. Perry’s Japan expedition. The Supply entered Edo (Tokyo) Bay on 13 February 1854 during the commodore’s second visit to Japan.

Her next assignment, however, was undoubtedly the most unusual of her career. Lieutenant David Dixon Porter—later a Union rear admiral—received a detailed assignment, not from the Navy, but from Secretary of War Jefferson Davis. Porter was assigned to the Supply “for the purpose of co-operating with the War Department in . . . the importation of camels.”

In his desire to rapidly develop territory recently acquired in the wake of the war with Mexico, Davis negotiated a $30,000 spending bill from Congress for an experimental U.S. Camel Corps in the desert west of the Rocky Mountains. Major Henry C. Wayne was in charge, but it was a cooperative Army-Navy effort in every sense.

No one in the U.S. government knew anything about camels. Wayne left early for Europe to consult with the British and French on their past experiences and later would join Porter in Italy. Together, they decided to purchase one camel early in their trip to determine its requirements for care and feeding, as well as its adaptability to prolonged shipboard life.

The Supply left New York on 4 June 1855, and by late July, Wayne was on board at Spezzia, Italy. The vessel took on her first two camels in Tunis on 9 August and headed east in the Mediterranean, seeking the best animals. In mid-October, amid the Crimean War, Porter and Wayne made a side trip to Balaklava, where they drew firsthand information about the animals’ military use from senior British officers. When asked, General Sir James Simpson, British forces commander, flatly declared his preference for the camel over the “best English horses.” By 30 January 1856, the Supply had visited Malta, Salonika, Constantinople, Alexandria, and Smyrna.

At Alexandria, Porter received word that the United States was to receive a gift of six dromedaries from the Egyptian viceroy. Porter “expected nothing but the very best . . . knowing that the eastern potentates take a pride in making presents of the choicest kind.” But dishonest subordinates evidently became involved. Once the camels were ready, Porter dispatched an officer, but he quickly returned and “informed me that the animals were so wretched in appearance, and so rotten with disease, that he would not take the responsibility of accepting them without further orders.” Porter’s inspection “found them infinitely worse” than the officer reported.

To Porter, it “looked like a studied insult.” Through the U.S. consul general, he refused the gift. When presented to the viceroy, “he put the matter in the proper hands,” and a week later Porter was given the choice of six camels from a lot of 15.

The Supply left the Ottoman Empire for the Gulf of Mexico on 14 February with her cargo of 33 camels. After an 87-day passage, Porter delivered 34 animals—six had been born and five died during the trip—to the Army at Indianola, Texas. From there, Wayne led his unusual command, the U.S. Camel Corps, to its home at Camp Verde, northwest of San Antonio.

Porter and the Supply, however, were only half finished. On 26 June, they received orders once again from Davis to purchase and convey additional camels. Porter arrived in Smyrna in early November and found 44 animals ready for loading. This was facilitated by Gwynn H. Heap, a Tunis resident who aided the first trip and was hired to do advance work for the second. The Supply sailed on 15 November, and on 10 February 1857, 41 camels were transshipped at Indianola to the steamer Suwanee for delivery to the interior. Three of the animals had died en route.

The next quarter-century of the Supply’s naval service was a return to normalcy. In mid-October 1857, she participated in a successful display of gunboat diplomacy off Paraguay. Service with the Africa Squadron on the Atlantic and Gulf of Mexico coasts followed until the outbreak of the Civil War. While servicing ships of the blockading squadrons, she engaged in her first and only combat action. On 29 January 1862, she captured the schooner Stephen Hart, which was carrying arms and ammunition, south of Sarasota, Florida.

On 21 February 1871, she sailed on a relief mission with supplies for French citizens left starving by the Franco-Prussian War. Twice over the six years from 1873 to 1879 she transported American exhibits to and from European expositions in Vienna and Paris. She was decommissioned at New York on 23 April 1879 and sold on 3 May 1884 to M. H. Gregory of Great Neck, Long Island. 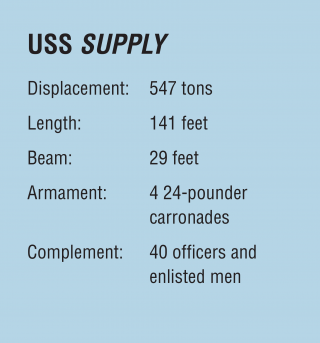