The U.S. Navy and Marine Corps have thousands of aircraft in their inventories, performing a wide variety of missions from the decks of ships and from Navy and Marine Corps air stations all over the world. Some of these aircraft were designed speciﬁcally for naval use, but many are used by the other branches of the armed forces as well. Some are ﬁxed-wing and others are rotary-wing (helicopters and tiltrotors). Aircraft typically are defined by their missions.

Fighter aircraft have fixed-wings and are used to destroy other aircraft and incoming missiles. They are the planes you normally would see involved in a “dogfight.” Very fast, highly maneuverable, and armed with antiair weapons, these aircraft often loiter above friendly forces in what are called “combat air patrols” (CAPs) to intercept and engage incoming enemy aircraft or missiles. They also penetrate enemy air space to engage the enemy’s aircraft and escort other kinds of aircraft when they are carrying out their missions in hostile areas.

Attack aircraft are designed to destroy enemy targets at sea and on shore such as ships, vehicles, transportation networks, airfields, and enemy troops. To accomplish these missions, they are armed with various configurations of rockets, guided missiles, gun systems, torpedoes, mines, and bombs. Attack aircraft can be either fixed- or rotary-wing. Some, like the F/A-18 Super Hornet, are designed to carry out both ﬁghter and attack missions.

Patrol aircraft are tasked primarily with finding enemy forces. They are designed more for extended range and time on station than for speed. Although they may be armed, sensors such as radar, infrared, acoustic, and magnetic anomaly detection devices are their most important components.

Antisubmarine warfare aircraft search out submarines visually, by radar, by magnetic anomaly detection, or by signals sent from floating sonobuoys. They then destroy them with rockets, depth charges, or homing torpedoes. Both helicopters and fixed-wing aircraft are used for antisubmarine warfare.

Mine warfare aircraft lay mines in enemy waters or sweep enemy mines from friendly waters or objective areas. Both rotary- and fixed-wing aircraft are used in mine warfare.

Tanker aircraft carry large amounts of aviation fuel to refuel other aircraft to extend their range and/or time on station.

Trainer aircraft generally are two-seat fixed-wing or rotary-wing aircraft that allow instructors and students to go aloft together to learn or perfect the techniques of flying.

Like ships, aircraft have names, such as “Growler,” “Hawkeye,” and “Poseidon.” Unlike ships, individual aircraft are not given singular names, but model type designations and a uniquely assigned serial number. More comparable to the “class” of a ship, all aircraft of a specific model bear the same name. For example, there are currently 546 F/A-18 Super Hornets in the Navy’s inventory and 360 MV-22 Ospreys in the Marine Corps’ fleet.

The basic organizational element for Navy and Marine Corps aircraft is the squadron. Some squadrons are carrier-based; others are land-based and, if their mission requires it, may periodically deploy to other locations. Some squadrons are subdivided into detachments and are scattered to various ships or bases.

Squadrons officially are identified by letter-number designations that tell something about their missions while giving them a unique identity. The first letter in a squadron designation is either a “V” or an “H.” The “V” (from the Latin volare, meaning “to fly”) indicates a fixed-wing aircraft squadron, and “H” is used for squadrons made up entirely of helicopters. If a squadron has both helicopters and fixed-wing aircraft, it defaults to “V.” In the days when there was a third type of aircraft in use—lighter-than-air (or airship) types—those squadrons were designated by a “Z,” after German airship pioneer Ferdinand von Zeppelin. Marine squadrons always are noted by the second letter “M.” Additionally, squadrons often have informal names that have more to do with morale than identification (“Black Knights,” “Diamondbacks,” etc.).

The letter or letters following the “V” or “H” indicate the squadron’s mission or missions. For example, a squadron whose primary purpose is training aviators in fixed-wing aircraft would be designated “VT.” By adding a number, an individual squadron takes on a unique identity; for example, “VT-3” designates Training Squadron Three, the “Red Knights” based out of Naval Air Station Whiting Field–North. The numbers, in most cases, have some logic to them—even numbers indicating squadrons assigned to the Atlantic Fleet and odd numbers designating those assigned to the Pacific Fleet—but movement and the periodic establishment and disestablishment of various squadrons has clouded some of the original intended logic. 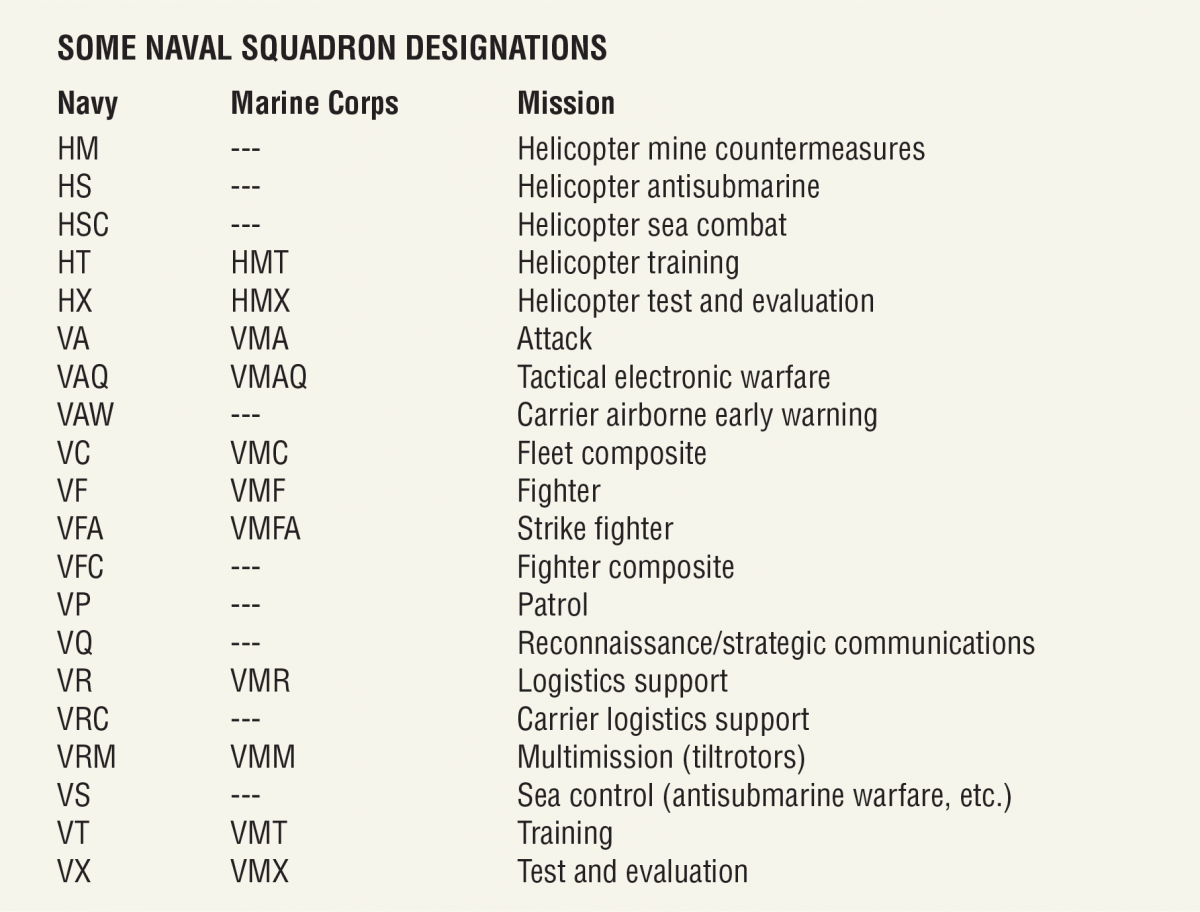 Aircraft squadrons typically are grouped into larger organizational units called “air wings” in the Navy and “air groups” in the Marine Corps. A carrier air wing (CVW) is usually made up of about eight squadrons, each serving different but integrated purposes. A Marine air group (MAG) is made up of any number of squadrons, and is based on shore. MAGs also can be deployed on board aircraft carriers and amphibious assault ships.

These varied squadrons give the Navy and Marine Corps a great deal of flexibility and a potent capability over a wide variety of missions.

LCDR Cutler is the Gordon England Chair of Professional Naval Literature at the U.S. Naval Institute. His many books include The Bluejacket’s Manual (Naval Institute Press), a copy of which every U.S. Navy enlistee receives.