Skip to main content
The USS Wyoming (Monitor No. 10) had a relatively benign and unremarkable career as the last of a ship type that saw its heyday in the U.S. Navy nearly a half-century earlier.
J. M. Caiella

Last of Her Line

Ships become historic for a variety of reasons. Some have made indelible marks on the history of the nation. Others were fought with heroism by their crews as just one ship among many, in one battle, in one war. Still others mark milestones in nautical history—the first of a type, the largest, the fastest. The ship featured here marks a different waypoint. Her only historic claim is that she was the last of her kind, with the exception of a few pretenders during the Vietnam War. Her ilk most likely never again will steam with the U.S. Navy.

When the unclassified miscellaneous auxiliary Cheyenne (IX-4) was struck from the Navy list on 25 January 1937, the monitor as a warship type ceased to exist in the service. What remained of her hulk was scrapped in the spring of 1939. She was the last in the line of 71 ships begun 76 years earlier by John Ericsson’s seminal USS Monitor. The heyday of the monitor in the U.S. Navy lasted approximately four years—during the Civil War. Indeed, 85 percent of those with Navy service were built between 1861 and 1865. Of the ten built after the war, five (although new ships) ostensibly were rebuilds of Civil War veterans. Only five “modern” monitors were ever built.

The type featured a very low freeboard—at times less than three feet above water—and a heavily armored hull carrying one or two rotating armored turrets with heavy guns. Despite a few ocean crossings, monitors were not very seaworthy warships. Their favor with Congress and the public hinged in large part on the recollections of what the original had done against the CSS Virginia in 1862. Congress continued to purchase them as coastal defense vessels despite the greater utility and warfighting capabilities of the armored cruiser and nascent battleships.

The last surviving U.S. monitor was laid down as the Wyoming (Monitor No. 10) on 11 April 1898 at the Union Iron Works in San Francisco and commissioned four years later, on 8 December 1902, at Mare Island Navy Yard. Her experience over the next few years is a time capsule of Navy life more than a century ago, when showing the flag in combat situations was offset by showing it at dinner parties.

She ran trials in 1902 and 1903 and fired target practice off the California coast through the end of the latter summer. She headed south in the autumn, reaching Acapulco, Mexico, on 31 October, but soon received orders for Panama. Earlier that year, the United States and Colombia signed the Hay-Herrán Treaty, granting the Americans a 99-year lease on the Panama Canal Zone. But the Colombian Senate rejected the treaty, arguing for increased payments. On 3 November, Panamanian separatists declared the country’s independence, and Colombia reciprocated by threatening an invasion to recover its lost province. The Wyoming and her Marines, along with the protected cruiser Boston, arrived on 13 November to support the revolution and stall the invasion until more forces could arrive. The Bluejackets rescued U.S. nationals, while the Marines made their presence felt in the interior. By Christmas eve, the landing force had returned to the ship. The monitor remained in Panama Bay until 19 April 1904, when she steamed for Acapulco and then for home, reaching San Diego on 14 May.

In the summer, she—along with the new torpedo boat destroyers Paul Jones (No. 10) and Preble (No. 12)—visited Ventura County, anchoring offshore for three days. The officers were feted at a reception and ball at the Ventura armory, and the Wyoming’s Marines paraded down Main Street led by the city band. Later, all were treated to a barbecue.

The Wyoming continued her public-relations tour 12 miles down the coast at Port Hueneme for two days before heading north to Santa Barbara. The ship stopped there at the request of Henry T. Oxnard and his wife. The Wyoming’s captain, Commander (later Rear Admiral) Vincendon L. Cottman, was a cousin of Oxnard, the president of the American Beet Sugar Company, later the American Crystal Sugar Company.

The Oxnards hosted both a dinner and barbecue at McGrath Beach, off the town of Oxnard, for the officers. Afterward, a newspaper reported, the commander and his officers “returned the compliment to their entertainers and escorted as many as desired who wished to travel the choppy water to the monitor, where its wonders were duly explained and examined.”

Through the rest of the year, the Wyoming’s West Coast travels ranged from California to Washington and Oregon. On 27 June, she and the Paul Jones and Perry (Torpedo Boat Destroyer No. 11) visited Portland, where headlines announced that “Curious Crowds Throng Warships” and “Thousands Visit the Grim Little Fleet,” with the Wyoming the “Center of Interest and a Wonderful Vessel.” Two days before, however, the trio had anchored briefly at the foot of 11th Street in Astoria, much to the chagrin of the local newspaper: “The warships have come and the warships have gone. In spite of the reputed enthusiasm and patriotism of the people of Astoria, they refuse to remain anchored off the city long enough to give the citizens a chance for inspection.”

The monitor, however, returned later that summer and participated in the tenth annual Astoria Regatta from 22 to 27 August, with her Marines leading Governor George E. Chamberlain during the main parade. She later took part in ceremonies at the dedication of monuments to the 1859 Pig War on 21 October at Griffin Bay and Roche Harbor on San Juan Island, Washington, before she entered the Puget Sound Navy Yard, Bremerton, for a refit the next day.

She remained there until January 1905, when she moved back south to Panama and then to Mare Island for decommissioning on 29 August. Recommissioned in October 1908, she soon attained the peak of her naval career. But that, too, was short-lived. She once again was refitted, but this time converted to use fuel oil instead of coal—the first ship in the U.S. Navy to be so equipped. Tests of her new steam-generating plant took her through March 1909. During that time, on 1 January, she was renamed the Cheyenne to free the state name for the projected Battleship No. 32. Her new oil-burning status, however, did not do much for her service. She once again was decommissioned, on 13 November. The monitor spent the rest of her career in and out of commission and thus in and out of the backwaters of the Navy.

Recommissioned in reserve on 11 July 1910, the Cheyenne was assigned to the Washington Naval Militia in 1911 and operated, in commissioned and in reserve status, into early 1913, when she was fitted out at the Puget Sound Navy Yard as a submarine tender. The monitor regained full commissioned status on 20 August 1913. She operated along the West Coast in her tender capacity into 1917, diverting twice in the spring of 1914 to transport refugees from Mexico to San Diego. She transferred to the Atlantic Fleet, serving primarily in the Gulf of Mexico during World War I. From January through October 1919, continued unrest in Mexico in the wake of its revolution prompted a naval presence in Tampico, in which the Cheyenne participated. On her return, she went to the Philadelphia Navy Yard, where she was decommissioned on 3 January 1920 and reclassified as IX-4 on 17 July. Just two months later she was recommissioned once again and towed to Baltimore, where she was assigned to training duty with the Naval Reserve Force through 1925. In January the next year, she was towed back to Philadelphia, where she was decommissioned for the last time on 1 June 1926.

Marine Corps Colonel R. D. Heinl Jr. wrote in 1961, “In the old Reserve Basin at Philadelphia Navy Yard, where I attended Marine Corps Basic School in 1937, there remained one monitor . . .nested for­lornly among the 4-piper destroyers of World War I. . . . One winter afternoon, with another boot lieutenant, I clambered aboard her with a flashlight, and we explored the old ship from reciprocating engines to her antique, apparently hand-powered twin 12-inch turret with huge manual cranks attached to rust-clogged racks and gears. [C]ould I possibly be the last officer on active duty in the Navy or the Marines to have trod the deck of a monitor?” 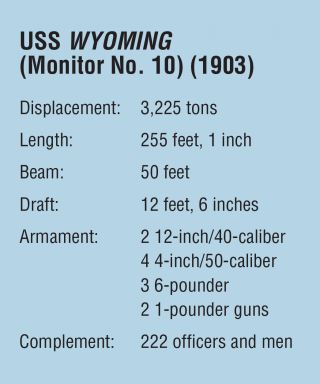