Islamic Seapower during the Age of Fighting Sail 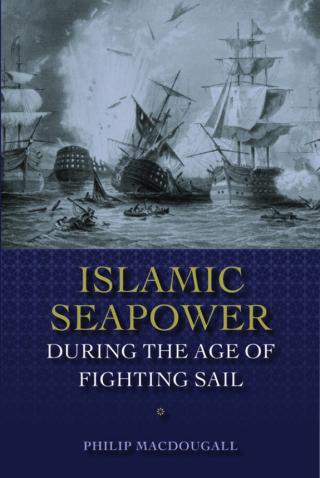 Little is written in English on the Islamic navies during the period C. S. Forester termed “the age of fighting sail”—the time in which sailing warships displaced oar-propelled warships and before steam supplanted sail. What little exists is not analytic or systemic, but results from intermittent Western contact, such as the U.S. Navy fighting the Tripolitan corsairs in 1801–4. There are obvious cultural and linguistic barriers to understanding the “other” side, but the administration, shipyards, training, and doctrine of those navies, as well as how and when they were used in combat, are interesting subjects. Philip MacDougall, formerly a lecturer at the University of Kent in England, has easy command of the diverse material. This survey is a scholarly tour de force.

Islamic Seapower during the Age of Fighting Sail has a sweeping scope—the Ottoman Empire, the “Maghreb” of the African coast (Morocco, Tunis, Tripoli, and Algiers), and the Islamic regimes of India. Much of what MacDougall packs into this slender volume will be new to most readers. The Ottoman Empire built and rebuilt its fleet after sustaining terrible losses against its enemies (often Russia, first seeking access to the Black Sea and then to the Mediterranean). Even though its ships were excellent, and despite a massive arsenal at Istanbul, eventually including a dry dock, ropewalk, sailcloth and gunpowder mills, and a naval school, the Ottomans lacked a maritime vision. Citing Alfred Thayer Mahan, MacDougall notes the Ottoman officers’ lack of fighting spirit and reveals a fleet too often disorganized and unprepared. The Ottomans were littoral sailors, sailing from landmark to landmark around the eastern Mediterranean—a strange failing for the civilization that developed celestial navigation—and defensive-minded. Their ships were manned only for six months each year; their naval administration was rigidly centralized; and the officer corps was corrupt. Religion exerted a baleful influence: The divan, the Sultan’s council, deferred to Sharia (Islamic canonical law) in delaying modernization. MacDougall analyzes these issues effectively and fairly. He also provides capsule summaries of critical battles, including Cette (1770) and Navarino (1827), and references lesser-known battles in the Black and Aegean seas.

The Barbary powers’ maritime forces are known to U.S. readers because the U.S. Navy was created to fight them. Objecting to the term “pirates,” MacDougall uses the Arabic term “ghazis” (sea warriors), demonstrating that their maritime attacks on Western merchant vessels were driven by a jihadist philosophy, as well as by the desire for plunder. He points out that a significant number of Barbary sailors were former Christians who “turned Turk.” MacDougall refers to the ghazis’ “continual success,” forcing European nations for centuries to choose between paying tribute in advance or ransoming their seamen after their merchant ships were captured.

The emergence of Egypt in the 19th century was marked by the development of a fleet of purchased ships. After that fleet was crushed at Navarino, Muhammed Ali Pasha created the Alexandria Naval Dockyard and a naval school in the 1830s with dreams of a modern fleet. The Egyptians constructed a fleet boasting eight ships-of-the-line and 15 frigates and corvettes. But there was no merchant marine—a common problem in the Arab world, limiting the pool of trained seamen on which a navy could draw—and the navy was unmotivated and inefficient, epitomized by a 100-gun warship that drew too much water to leave her dock.

Perhaps the most obscure navies MacDougall writes about are those in the Persian Gulf and the Indian Ocean. Oman made a credible effort to build a navy, but its ships were held together by coconut coir, not nails, and one shot could break open a vessel. Persia flirted with building a navy, but ignorance of the sea and the lack of facilities, timber, and shipwrights was a constraint. Constructing teak frigates, Mysore (southern India) wanted naval power to drive off the British East India Company, but the British crushed the Mysore navy in a series of wars. Interestingly, Mysore tried to develop a pan-Islamic alliance against Britain, but religious differences between Sunnis, Shia, and Ibadis prevented a serious threat to British hegemony.

MacDougall not only mines Western, Turkish, and Arabic sources, but also demonstrates deep knowledge of Islamic philosophies, religious practices, and history. His writing is dry and somewhat pedantic, but parts of his narrative are compelling. Islamic Seapower during the Age of Fighting Sail is nicely illustrated but suffers from a lack of maps, a serious drawback given the obscure locations. The publisher’s suggested list price is outrageous. Still, this book fills a void in the naval literature and provides an excellent overview of the Islamic sailing navies.

Mr. Leiner, a lawyer, is author of The End of Barbary Terror: America’s 1815 War with the Pirates of North Africa (Oxford University Press, 2006) and Millions for Defense: The Subscription Warships of 1798 (Naval Institute Press, 2000) and is a frequent contributor to Naval History.

Trading in War: London’s Maritime World in the Age of Cook and Nelson 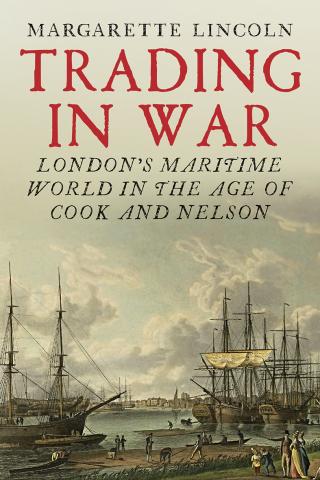 In this vigorous and well-grounded account of the center of empire, Margarette Lincoln, formerly deputy director of the National Maritime Museum at Greenwich, England, displays a mastery of the archives. Her account emphasizes the central impact of war on London’s port life, which took a number of forms. The naval mutiny at the Thames Estuary anchorage of the Nore in 1797 was made much more dangerous by the vulnerability of London to blockade. This was not a case at remote Invergordon, Scotland, in 1931.

At the same time, trade was the crucial driver of maritime expansion. A spate of dock building took place in the first years of the 19th century, which helped provide the infrastructure to maintain the commercial activity on which Britain’s war economy and public finances depended. The first pair of docks to open, in 1802, were known as the West India Docks, which cleverly cut across the neck of the Isle of Dogs to provide entrances at both ends. The London Dock followed, as did the East India Docks and the Surrey Commercial Docks.

This dock building reflected the acute congestion on the Thames and its wharves in the 1790s, as overseas and domestic trade expanded. In 1800, just before the development of enclosed docks, some 1,800 vessels were being moored in the river. There were innumerable complaints of lengthy delays before a berth was available, all of which were exacerbated by whole flotillas of cargo ships, which tended to arrive simultaneously when winds and tides gave favorable sailing conditions. Vessels would moor in the river, their cargoes transferred to the wharves on lighters. Knowledge of the tides was required by the lightermen.

London’s commercial role increased in wartime as the trade of other European maritime powers, especially the Netherlands, was hit by blockade, privateering, and, from 1795, the consequences of French occupation.

Dock employment varied greatly. Some of the work was skilled and therefore fairly regular and well paid, but most dock work was poorly paid and casual. Until remarkably late, many cargoes were moved by hand, and employment levels fluctuated greatly with trade, as did the nature of injuries suffered.

Lincoln’s account is especially valuable in its handling of the role of women at all social levels. Women in business and women as workers are tackled, as is their role in defending the interests of absent husbands. She emphasizes the contribution of women to the war effort against France and to commercial activity.

Lincoln also captures the repeated crises of fire, for example the tremendous fire that devastated the Wapping district in July 1794. As she points out, it was a huge blow to the war effort.

The social and political tensions of the period spread to leave very varied memories. Thus, the 1797 Nore mutiny left a bitter legacy of distrust. Alongside heroic verses celebrating triumphs can be noted the following on Sir John Colpoys, who ordered fire on his own crew during the Spithead mutiny on board HMS London:

The murdering Colpoys, Vice-Admiral of the Blue,
Gave order to fire on the London’s crew;
While the enemy of Britain [France] was ploughing the sea,
He, like a base coward, let them get away
When the French, and their transports sailed for Bantry Bay.

Mr. Black is a professor of history at the University of Exeter. He is author of Mapping of Naval Warfare: A Visual History of Conflict at Sea (Osprey, 2017) and Naval Warfare: A Global History Since 1860 (Rowman and Littlefield, 2017).

On Her Majesty’s Nuclear Service 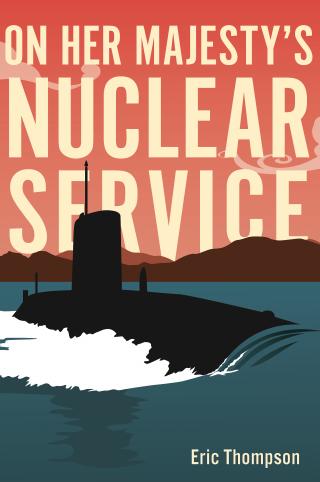 The sudden roar came as a shock. It sounded like a jumbo jet taking off. “Steam leak in the TG room!” a voice shrieked over the intercom. The roar said it all. This was serious. The Turbo-Generator room was directly beneath me.

These are the opening lines of On Her Majesty’s Nuclear Service. Unfortunately, this exciting account—written by the author while he was the chief engineer of the submarine Revenge—is an exception in this autobiography. Indeed, following this near-catastrophic event, the author does not reveal how he explained the situation to the submarine’s commanding officer; rather, he tells how he went back to his cabin and debated whether to shave.

The author shares his life story—from when he was in his mother’s womb and his father was on board HMS Intrepid being sunk by German bombers in the Dodecanese Islands in 1943 until he retired as a commodore. His naval career began at Britain’s Dartmouth naval college; particularly interesting is his diary kept as a cadet. Periodically the naval reader will find several significant passages, such as his training and engineer assignments and the handling (and mishandling) of protesters at submarine bases. These events included several instances of protesters entering bases by various means and even reaching nuclear submarines.

But most of the book is personal—his mother-in-law disliked his using the term “bloody” and he was good at the “Scottish dance.” The American reader will feel somewhat frustrated by the continued references to famous “Brits” by their nicknames with no further identification and by terms such as “dogs end,” “a very large penny dropped,” and “Upper Yardman scheme.”

There are many passages related to the author’s training and submarine service that will be of interest to the professional naval reader. But one must seek them out through the author’s personal camouflage, exacerbated by the book’s lack of an index.

The reader who seeks information on British submarines during the Cold War should read The Silent Deep by Peter Hennessy and James Jinks. Published in 2015, this excellent 823-page book describes British submarine development and operations during the Cold War and in the subsequent two decades. (See review in Naval History, October 2016, pp. 67–68.)

Mr. Polmar, a former columnist for Proceedings, has written extensively on nuclear-powered submarines, including the books Atomic Submarines (1963), Death of the Thresher (1964), and, with K. J. Moore, Cold War Submarines (2004), as well as nine editions of the Naval Institute’s Ships and Aircraft of the U.S. Fleet.