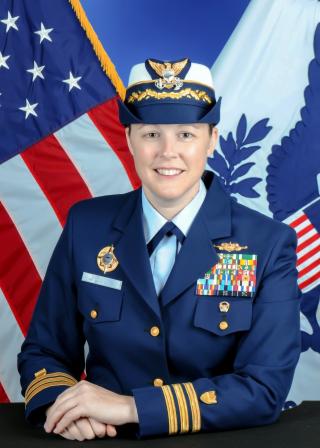 A native of Vienna, Virginia, CAPT Harrison graduated from the Coast Guard Academy in 1995. CAPT Harrison first served as a Deck Watch Officer on U.S. Coast Guard Cutter (USCGC) Storis (WMEC-38) in Kodiak, AK, followed by service as Executive Officer of USCGC Kiska (WPB-1309) in Hilo, HI, Protocol Officer for the Commandant of the Coast Guard in Washington, DC, and Commanding Officer of USCGC Aquidneck (WPB-1336) in Fort Macon, NC, and later Manama, Bahrain. In March 2003, CAPT Harrison led Aquidneck during the invasion of Iraq in support of Operation Iraqi Freedom.

Upon returning from the Arabian Gulf, CAPT Harrison served as the Senior Instructor of the Maritime Boarding Officer School in Yorktown, VA, and then established the Maritime Law Enforcement Academy in Charleston, SC, where she served as Executive Officer. She returned to sea in 2006 as Executive Officer of USCGC Legare (WMEC-912) in Portsmouth, VA. After earning a master’s degree in public policy from Princeton University, she was responsible for strategic oversight, policy formulation, and Congressional briefings for programs representing $2.7 billion of the Service’s operating base as a Program Reviewer in the Office of Budget and Programs. CAPT Harrison earned a second master’s degree in Educational Technology Leadership from The George Washington University in 2010.

In 2010, CAPT Harrison was chosen by President Barack Obama to serve as of one of 13 White House Fellows for 2010–2011 during which she served as a senior advisor to the Administrator of NASA and acting Deputy Chief of Staff of NASA. She then served as a Strategic Analyst in the Strategic Management and Doctrine Directorate before assuming command of USCGC Northland (WMEC-904) in Portsmouth, VA. After Northland, her research as the Coast Guard’s first National Security Affairs Fellow at Stanford University’s Hoover Institution focused on the Arctic and sexual assault prevention. She then served a year-long detail in the Office of Management and Budget’s National Security Division as a Program Examiner for the Department of Veterans Affairs, followed by an assignment at Coast Guard Headquarters as the Coast Guard’s Drug and Migrant Interdiction Chief in the Office of Law Enforcement. She reported to her current assignment in August 2017.

In her personal time, CAPT Harrison is active in many volunteer public service organizations.  Most notably, she has been a volunteer firefighter and emergency medical technician (EMT) since 1999.