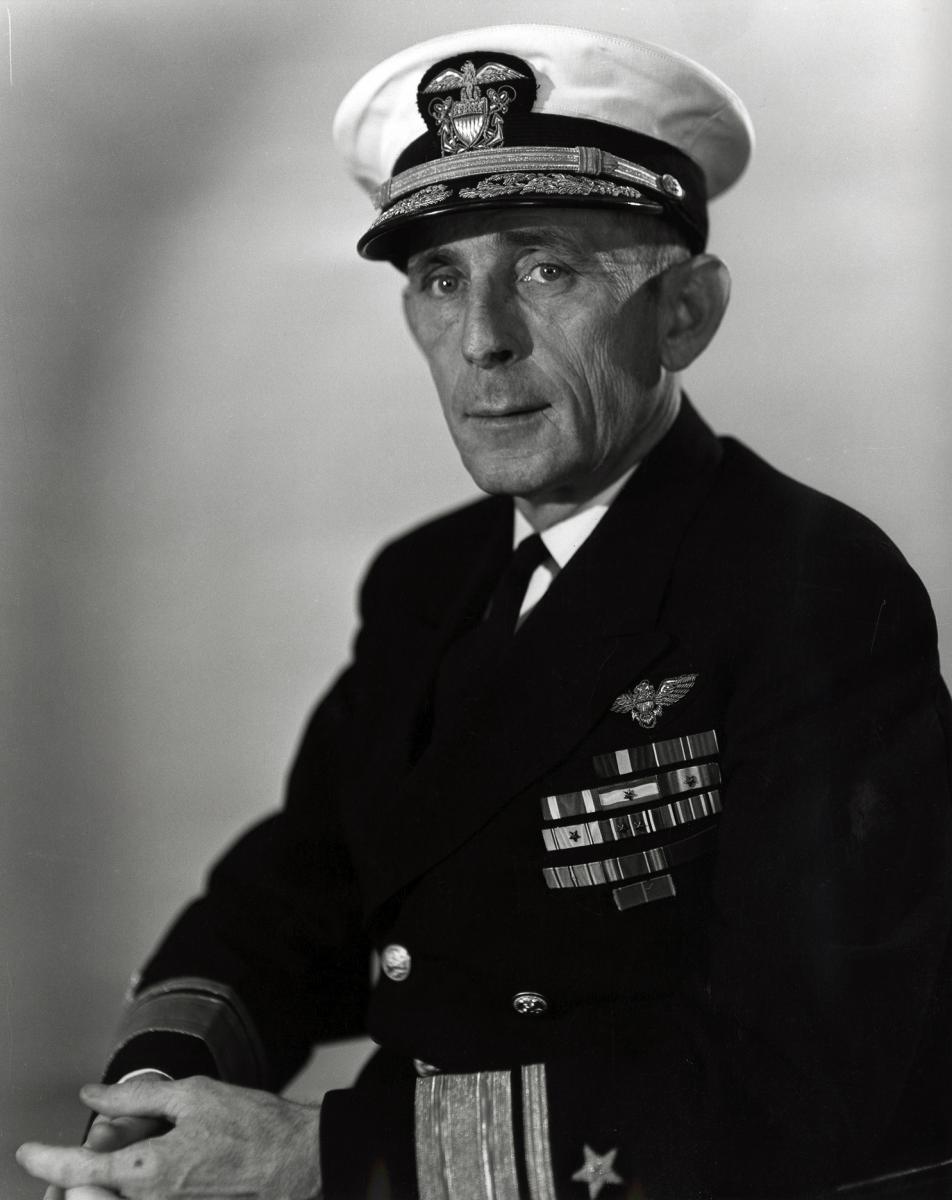 Rear Admiral Daniel Gallery (1901–1977) was the eldest of four brothers who all had careers in the navy and rose to the rank of Rear Admiral. He was a career aviator and saw extensive action in World War II. In 1943 he commissioned and took command escort carrier USS Guadalcanal(CVE-6) and joined an antisubmarine Task Group in the Atlantic to hunt German U-Boats. Elements of the task group sank U-544 in January 1944, and U-515 and U-68 on two successive days in April 1944.

Then-Captain gallery may be best remembered for the events of 4 June 1944 when his task group captured U-505 after driving her to the surface. A boarding party from the destroyer escort USS Pillsbury (DE-133) succeeded in capturing the submarine and its highly sought-after Enigma code machine and code books. U-505 became the first foreign man-of-war captured in battle on the high seas by the U.S. Navy since the War of 1812. Gallery himself chronicled the adventure in Twenty Million Tons Under the Sea.

After the war, Gallery barely escaped court-martial for publicly disagreeing with the Truman Administration’s plans to reduce the scope and size of the Navy to focus on strategic nuclear bombing in what became known as the “Revolt of the Admirals." Gallery continued in his career until he retired in 1960.

In the clip featured here from his third of five interviews with Dr. John T. Mason Jr. at the U.S. Naval Institute in Annapolis, Maryland in June 1974, Admiral Gallery discusses the capture of the German Submarine U-505 on 4 June 1944. 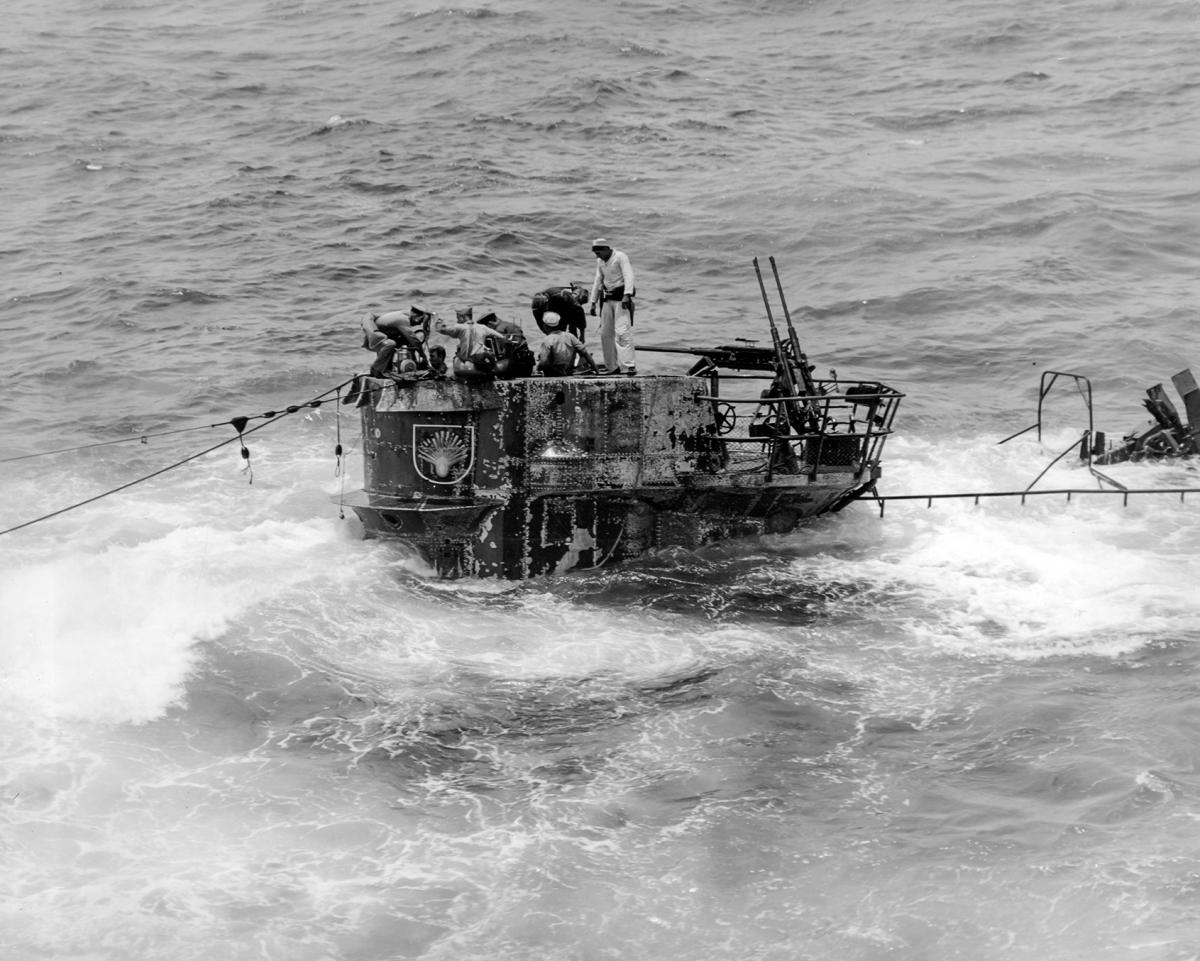 Admiral Gallery: We caught him completely by surprise. He was running submerged and a destroyer picked him up on sonar. We depth charged him. The first attack shook him up a bit, but didn't do much damage.

Our planes in the air could see this guy in clear water. This isn't often you can do this, but they spotted him running submerged and they were able to coach our destroyers right over him.

We dropped another depth charge which shook him up pretty badly, rolled him over on end under water and dumped everybody into the bilges. They were just sitting down to their Sunday dinner and everything was dumped on top of them. They jammed his rudder hard over, and it created panic among the crew. The crew came swarming out of the after torpedo room yelling that the pressure hull had been ruptured, and that the after torpedo room was flooding. The skipper took their word for it.

So he blew his tanks and surfaced and abandoned ship. He came up and the crew went overboard and left the sub running at about seven knots on the surface with the rudder jammed hard over running in a big circle.

She popped up almost in the middle of the Task Group. The destroyers immediately opened up on them with their small stuff – twenty millimeter and machine guns and some three-inch – and the crew went overboard.

Meantime, we dropped our boats in the water. The boat from the Pillsbury was the first one to get there. Lieutenant David[*] was in charge of the boarding party of ten men. They chased the sub around in the circle and finally caught up with it, and threw a line aboard. A boy jumped out of the whale boat and tied it to the back of the submarine.

When he did incidentally I was about half a mile away and watching this thing through the binoculars, of course. I broadcast over the loudspeaker, "Hi, ho Silver, ride 'em cowboy!” when they got the line aboard.

Then David and two other lads, Anispul and Wdowiak, were the first aboard. They beat it up to the conning tower, which was open.

We'd seen a number of people go overboard, but we were by no means sure that everybody had gone overboard. It was a good chance that there were still people on board waiting for them down there to greet them with a machine gun.

But David, Anispul, and Wdowiak plunged down the conning tower and found to their amazement that the sub was all theirs. That is, it was all theirs if she didn't sink or blow up. She was completely abandoned, the skipper and everybody gone.

But she was in almost neutral buoyancy by this time, just about ready to up end and go down, and water was pouring into her. And as far as I knew there were booby traps all over her and so on. They soon found the place where the water was coming in, which was the bilge strainer that had the cover knocked off. The water was pouring in through that. Then one of the boarding board found the cover which was lying right there on the floor plate, luckily for us. If the thing had gone down in the bilges where he couldn't find it we wouldn't have been able to save her. He was able to put that cover back in place and set up on the butterfly nuts on it and stop the water from coming in.

Doctor Mason: That must have been quite a feat with the pressure –

Admiral Gallery: It was a lot of pressure, but he had a lot of incentive, too, to get it back.

He got it in and screwed up on the nuts and stopped the water just in the nick of time. You can see in the movies that we got that day she was right on the verge of upending and going down when he got it.

[*] Lieutenant Albert David was awarded the Medal of Honor for his actions in capturing U-505.

Based on five interviews conducted by Dr. John T. Mason Jr., from August 1970 through September 1974. The volume contains 212 pages of interview transcript plus an index and appendices. The transcript is copyright 1976 by the U.S. Naval Institute; the interviewee has placed no restrictions on its use.