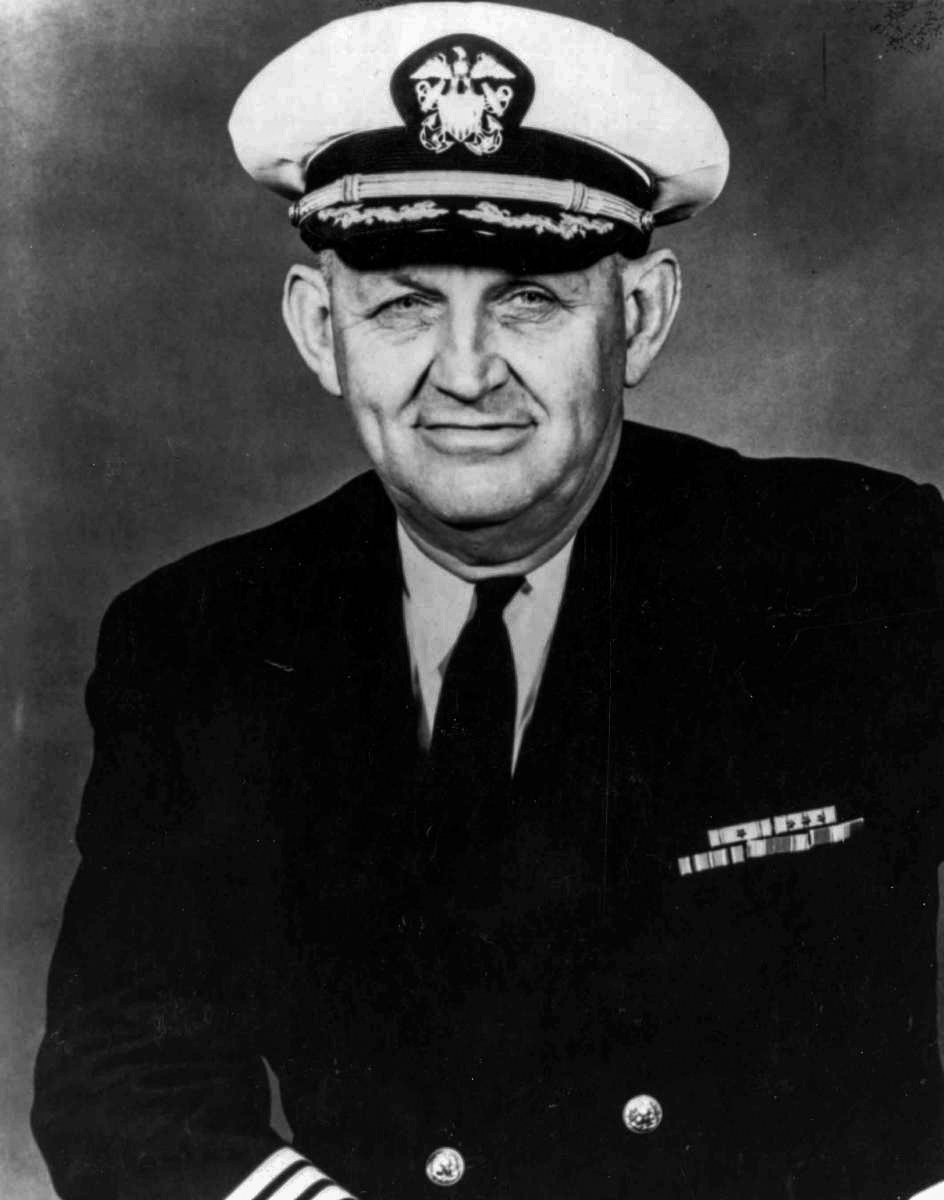 In a career marked by a great deal of administrative work rather than parish duty, Faulk is probably best known for his spirited--and eventually successful--campaign against compulsory church attendance in the Navy. Among his varied duties were service in the battleship Idaho (BB-42) in the late 1930s, at the Cavite Navy Yard in the Philippines as World War II approached; in the battleship Missouri (BB-63) at the end of the war and the immediate postwar period; as chaplain at the Recruit Training Center, Bainbridge, Maryland; as fleet chaplain for the Pacific Fleet; and at the Eleventh Naval District. Faulk's recollections of service during World War II are important because of his observations concerning Rear Admiral Robert Workman, wartime Chief of Chaplains, and because of Faulk's role in recruiting chaplains through the V-12 program. He has much to say also on collateral duties of chaplains and on the Navy Relief Society.

In this audio selection from his oral history, Captain Faulk serves up a unique, chaplain’s-eye view of the 2 September 1945 Japanese surrender ceremony on board the USS Missouri (BB-63), and recites the well-received prayer he composed for the historic occasion. 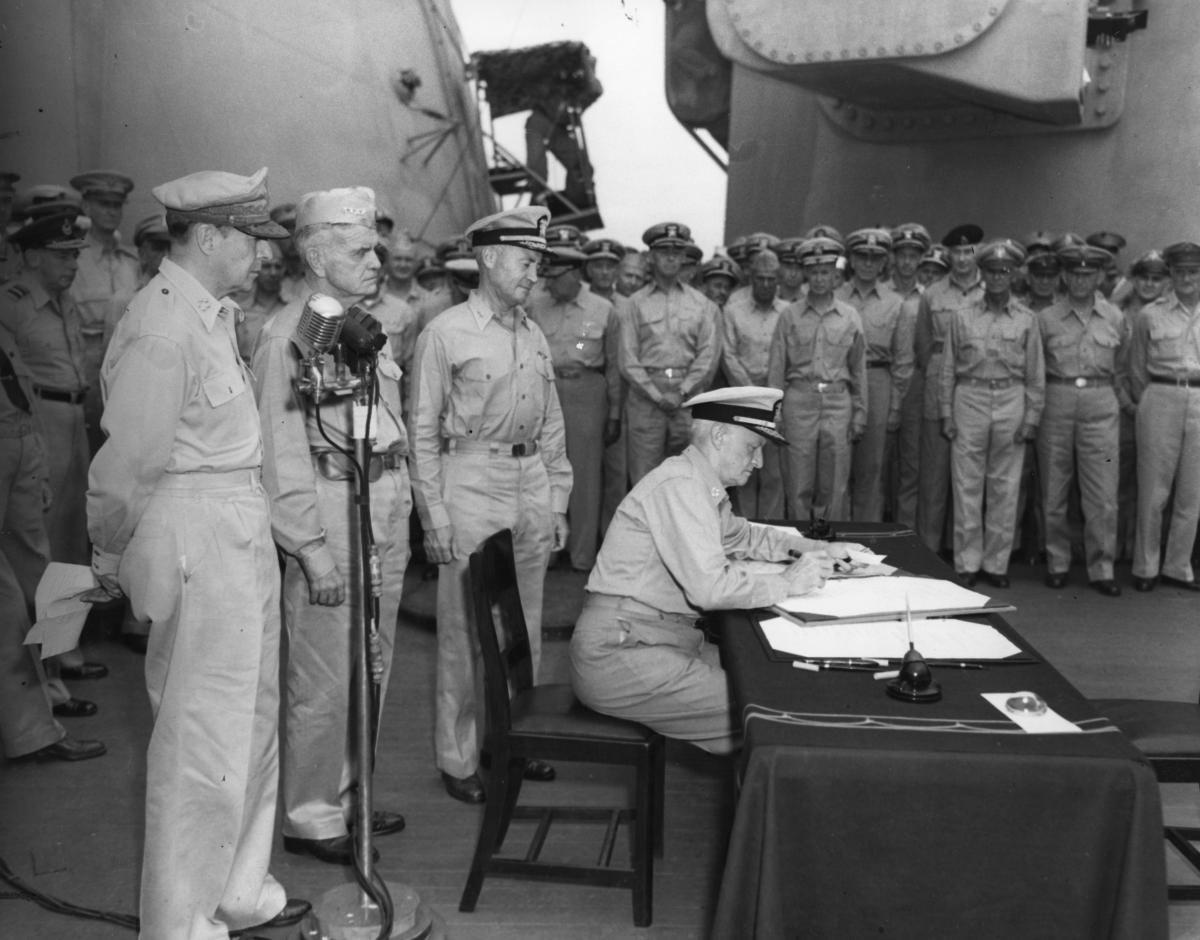 Captain Faulk: The plan was that all the Admirals and Generals who were there would be lined up on the surrender deck, facing outboard to starboard, just outside the captain's cabin, and the surrender table would be placed there on the deck at the 01 level. The ceremony was to take place there. Over the door into the Captain's Cabin had been mounted the Flag which had flown from Commodore Perry's flagship when he entered Tokyo Bay almost a hundred years before. We had had a custom in the Missouri like most of the ships that had chaplains during the war in which daily prayers were said over the ship’s loudspeak­er system. More often than not this was done at sundown or at taps or at some other time of the day –

John T. Mason, Jr.: Did every activity cease during that time?

Captain Faulk: To an extent. Everybody stood mute, games stopped, and everything was quieted down. It was very significant to see it happen - everybody on the ship stopped and stood still, paused, and listened, and gave every evidence of at least participating in the prayers. I never saw an instance where there was anything untoward or disrespectful at all in that moment. It was only 20 or 30 seconds of prayer.

Captain Sunshine Murray, our skipper, decided it would be more appropriate instead of having our prayer in the even­ing if we had it as a prelude to the surrender at eight o'clock. The surrender ceremony was due at nine and we’d have a prayer said over the ship's loudspeaker system at eight o'clock. So I did the prayer. I have a copy of that prayer.

John T. Mason, Jr: Why don’t you read that into the tape?

Captain Faulk: This is the prayer which I offered at eight o'clock.

John T. Mason, Jr: Was Nimitz there by that time?

Captain Faulk: I think he was aboard and I think he was up in the Admiral’s cabin. Some of the others there were Vinegar Joe Stilwell who was in the wardroom, as I remember. He took Command in Okinawa after General Buckner was killed. Quite a few had already gathered. Many of the American Army and Navy people were already aboard.

Captain Faulk: He came aboard prior to nine o'clock. I'm not sure just when he got there but it was well in advance of the sur­render ceremony itself, because he was in the admiral's cabin, too.

I used the microphone which was far from the surrender scene and, as was the custom, we called "Attention all hands!Stand by for evening prayer." That would be the way we'd introduce it each time, except on this occasion I merely indicated that instead of our evening prayer the commanding officer had requested that we offer a prayer before the surrender ceremony. Here's the prayer I used on that occa­sion.

Eternal God, Father of all living, we offer our sincere prayer of thanksgiving to Thee on this day, which we now dedicate to peace among the nations, remembering another Sabbath day that was desecrated by the beginning of this brutal war. We are thank­ful that those who have loved peace have been rewarded with victory over those who have loved war. May it ever be so! On this day of deliverance, we pray for those who, through long years, have been imprisoned, destitute, sick, and forsaken. Heal their bodies and their spirits, O God, for their wounds are grievous and deep. May the scars which they bear remind us that victory is not bought without cost and peace is not without price. May we never forget those who have paid the cost of our victory and our peace. On this day of surrender we turn hopefully from war to peace, from destroying to building, from killing to saving. But peace a without justice we know is hopeless and justice without mercy Thou wilt surely despise. Help us, therefore, O God, to do justice and to love mercy and to walk humbly before Thee. We pray for Thy servant, the President of the United States, and for all the leaders of all lands that they may be endowed with wisdom sufficient for their great tasks. Grant unto all the peoples of the earth knowledge of Thee with courage and faith to abide within the shelter of Thy sovereign law. Amen.

That's the prayer that was used on that occasion.

After the prayer, I remember there were admirals and gen­erals all around and they seemed to be most appreciative of that moment.

Based on four interviews conducted by John T. Mason Jr. in November 1974, the volume contains 465 pages of interview transcript plus an index and numerous appendices. The transcript is copyright 1990 by the U.S. Naval Institute; the interviewee placed no restrictions on its use.