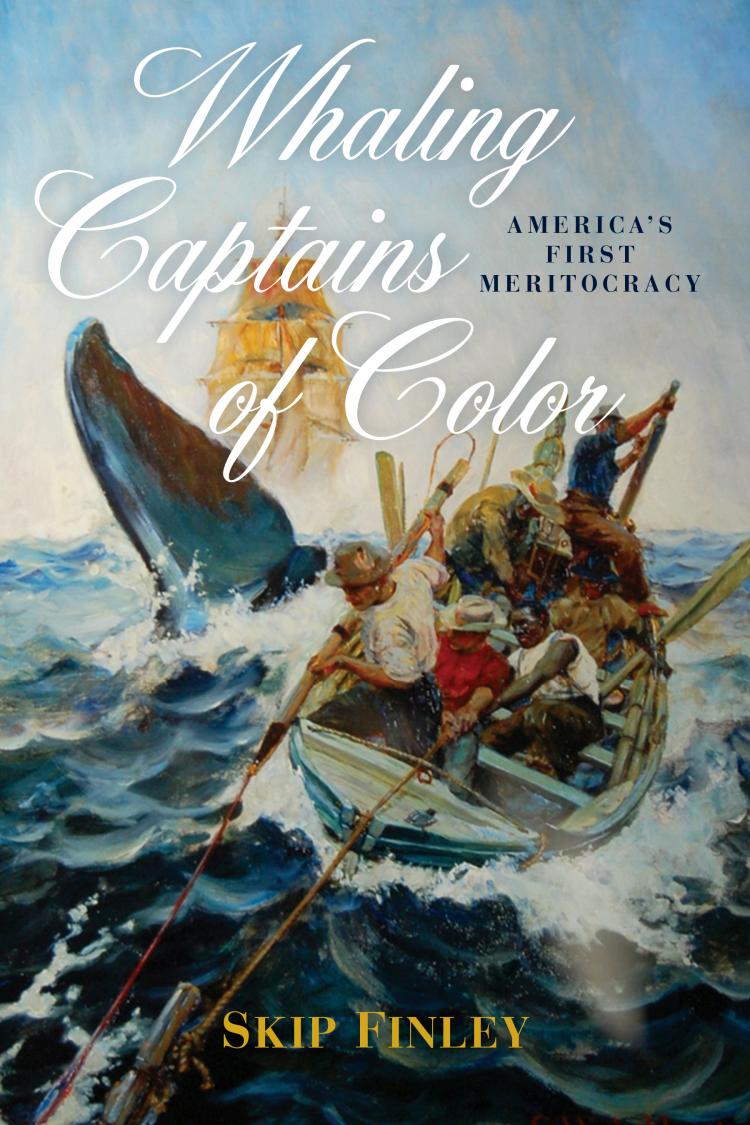 The history of whaling as an industry on this continent has been well-told in books, including some that have been bestsellers, but what hasn’t been told is the story of whaling’s leaders of color in an era when the only other option was slavery. Whaling was one of the first American industries to exhibit diversity. A man became a captain not because he was white or well connected, but because he knew how to kill a whale. Along the way, he could learn navigation and reading and writing. Whaling presented a tantalizing alternative to mainland life.

Working with archival records at whaling museums, in libraries, from private archives and interviews with people whose ancestors were whaling masters, Finley culls stories from the lives of over 50 black whaling captains to create a portrait of what life was like for these leaders of color on the high seas.

Each time a ship spotted a whale, a group often including the captain would jump into a small boat, row to the whale, and attack it, at times with the captain delivering the killing blow. The first, second, or third mate and boat steerer could eventually have opportunities to move into increasingly responsible roles. Finley explains how this skills-based system propelled captains of color to the helm.

The book concludes as facts and factions conspire to kill the industry, including wars, weather, bad management, poor judgment, disease, obsolescence, and a non-renewable natural resource. Ironically, the end of the Civil War allowed the African Americans who were captains to exit the difficult and dangerous occupation—and make room for the Cape Verdean who picked up the mantle, literally to the end of the industry.

Skip Finley is a former broadcasting executive who was responsible for over 40 U.S. radio stations and experienced success in all areas of radio. Attempting retirement since age 50, he keeps returning to communications, currently in marketing at the Vineyard Gazette Media Group on Martha's Vineyard, where he summered since 1955, deciding to become a writer. For five years Finley wrote the weekly Oak Bluffs Town Column and is a contributor to several publications in the areas of whaling and history.

"The story of people of color in the whaling industry is a fascinating and hitherto unexplored subject enough, but Skip Finley’s brilliant survey of the black captains and crew of the New England whale fisheries takes it one step further. His swift and sure narrative is excitingly told, bringing a fresh and vibrant focus to a vital part of American, and indeed global, history.” —Philip Hoare, author of The Whale

"Skip Finley provides a fascinating portrait of the turbulent and fraught world of the men of color who not only were whalemen, but also became leaders in one of America's most iconic industries. Whaling Captains of Color is a most welcome and long overdue addition to the literature, and one which will hopefully spur others to dig deeper into this important aspect of whaling history." —Eric Jay Dolin, author of Leviathan: The History of Whaling in America

“Much more than a prodigious work of scholarship, Whaling Captains of Color is also an entertaining read that puts the focus where it properly belongs: on the multicultural essence of a fishery that spanned the globe. Highly recommended.” —Nathaniel Philbrick, author of In the Heart of the Sea: The Tragedy of the Whaleship Essex

“In this engaging new volume, Skip Finley has written a comprehensive account of the over fifty sailors of color who rose to captain America’s great whaling ships. Meticulously researched, Whaling Captains of Color provides an overview of the 200 years of industrial whaling, a profession in which a relative meritocracy existed. In addition, Finley provides a critically important analysis of the social and legal conditions on land which encouraged so many people of color to brave the dangers of the sea.” —Henry Louis Gates, Jr., Alphonse Fletcher University Professor, Harvard University

“Whaling Captains of Color by Skip Finley is a fascinating exploration of the lives of multicultural whalemen, mostly unknown to us until now, during the eighteenth and nineteenth century in America…. Skip Finley thoughtfully honors and illustrates how the men of color in this book shaped commercial whaling, one of America’s earliest global industries. I highly recommend this book.” —Alicia Carney, Nantucket Book Festival

“In Whaling Captains of Color, Island writer Skip Finley has produced an extraordinary work that will change your perspective on the highly romanticized whaling era in American history, and the role of people of color in a trade that brought whalers fortunes and death.” —Martha’s Vineyard Times

“Whaling Captains of Color: America’s First Meritocracy is an examination of a fascinating quirk in America’s history of race relations…. It follows its cast of characters to their lives after the whaling industry had ended, continuing to illuminate an important chapter in American history.” —Vineyard Gazette

“Finley follows the history of more than fifty black and native Americans who became whale ship captains, ship owners, and chandlers (running businesses supplying whaling ships). Revealed is a fascinating tale of the rise and fall of family whaling and shipping dominions run by men of color. This is placed against the backdrop of both American society and whaling during the period. Whaling Captains of Color examines both an industry critical to America’s industrialization, the people that worked in it, and the dynamics that created a color-blind meritocracy in a color-conscious era.” —Ricochet

“This book is the result of extensive research into the whaling trade and the lives of some of its captains…. In writing this book, the author knew he needed to tell the story of whaling to any potential readers who might otherwise be unfamiliar with the industry. He does an admirable job and provides wonderful portraits of the many brave men who reached the pinnacle of their careers because of their knowledge and skills. Although planned as an excellent sea story, by being published during the Black Lives Matter movement, Whaling Captains of Color will be read by many people enthralled to discover that so many black men were in command of their ships and their destinies.” —Pirates and Privateers

“Whaling Captains of Color: America’s First Meritocracy is a comprehensive yet unusual view of a storied fishery that was especially hazardous. It was partly manned by men of colour who braved their way into positions of leadership and responsibility. This narrative is a guidepost into a welcome aspect of whaling literature, one that has received little attention. The author’s many tables, appendices and bibliography should be particularly useful to scholars of this industry and maritime historian in general. I highly recommend Finley’s latest work.” —The Northern Mariner / Le marin du nord

“Whaling Captains of Color is not just a collection of logbooks, photos, and graphics; it is stories of the men of color who rose to the pinnacle of their profession: Master of the Vessel. The author has painstakingly searched logs, articles, and firsthand accounts to bring to life the meritocracy of the sea. But this is not a glossy sea story. It is the down-anddirty of an industry that thrived from 1700 until the early 20th century, a chronicle of the individuals and families who gained a level of success unknown, anywhere else, in the lives of people of color in their time. The book is also an in-depth study of the whaling industry, race, maritime lore, family structure, religion, nepotism, genealogical integration, and education. It is an excellent primer of the whaling industry, and a salute to the men of color who helped to sustain it for 150 years.” —WoodenBoat

“This was a really good read, telling the incredible stories of the people of color living free and working in the era of American whaling (mainly the late 1700s to late 1800s). I enjoyed the vivid imagery of strong-willed, intelligent, and successful men of color (mainly of African descent) living free during the slave economy of early America…. This is a great read for anyone wanting to learn about an overlooked part of the history of early American of color that owned, designed, built, and sailed whaling ships. Lovers of the sea will particularly enjoy many stories of life aboard whaling ships.  Stormy seas, sunken ships, rags to riches, mutiny, war… it’s all in there! 4.5 Stars!” —Retired Rats