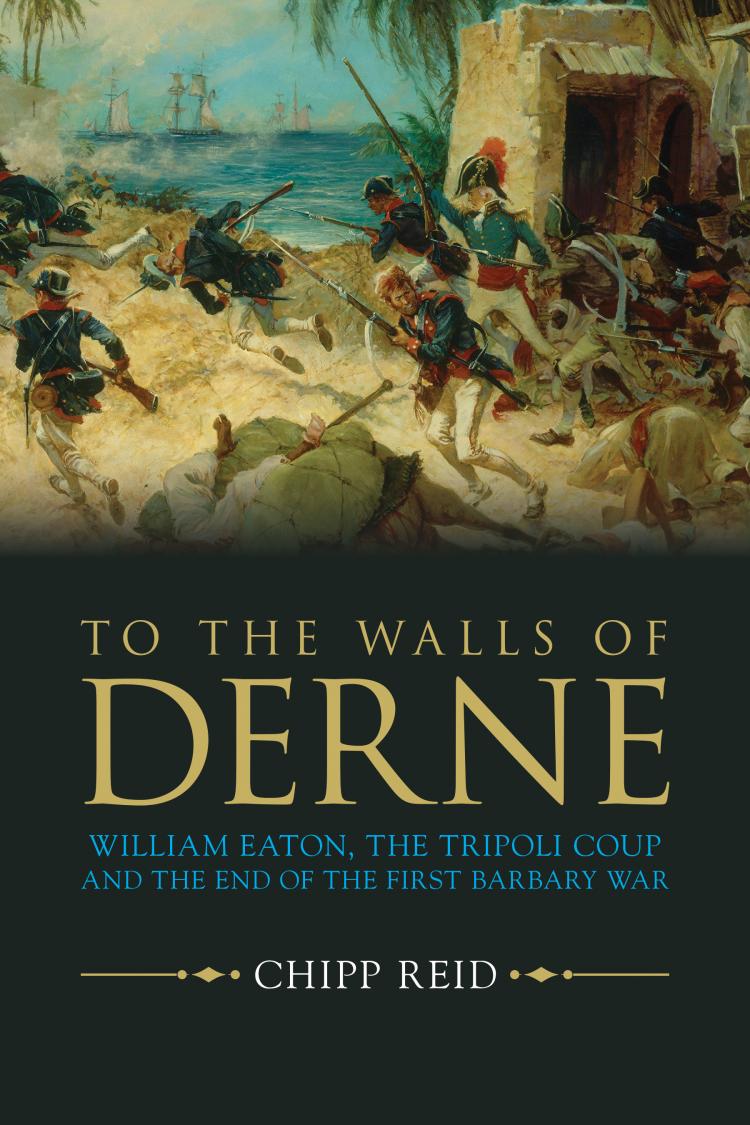 To the Walls of Derne

William Eaton, the Tripoli Coup, and the End of the First Barbary War
By Chipp Reid
Hardcover $29.95
Member Price $23.96 Save 20%
Sign in to receive member pricing
Overview Author Reviews

Chipp Reid, author of Intrepid Sailors, continues to tell the story of the war against the Barbary Pirates of Tripoli, America’s first overseas war. To the Walls of Derne recounts the 1804 naval campaign to unseat the ruler of Tripoli, Yusuf Karamanli.

Using a three-pronged approach, President Thomas Jefferson first ordered the most powerful U.S. naval squadron the world had yet seen to the Mediterranean to begin the attack on Karamanli. Under the command of Commodore Samuel Barron, the squadron included many of the same officers who had made Commodore Edward Preble’s summer campaign in 1804 a success. Barron, however, lacked Preble’s aggressive spirit and he also had to contend with a debilitating illness. Meanwhile, President Jefferson gave Consul General Tobias Lear carte blanche to broker a peace treaty with Tripoli. Complicating his mission were the more than 300 American captives who had fallen into corsair hands in 1803. Although Lear could ransom them, he had orders to pay as little as possible for a treaty.

Against this backdrop, there was a dramatic and daring attempt to oust Yusuf and replace him with his pro-American brother, Hamet. The mission was the brainchild of soldier-turned-diplomat-turned adventurer William Eaton, would lead an epic march across the Libyan desert that culminated in what was the first-ever raising of the American flag over foreign soil and our young nation’s first attempt at regime change.

Although all three men knew about one another’s missions, each wanted to be the one to end the war and reap the glory. As costs continued to escalate, and Congress became less willing to fund an overseas military expedition, the pressure to end the war became enormous. Jefferson, at first enthusiastic about Eaton’s mission, grew less and less supportive as time went on, even while Barron and Lear used the financial issues facing Eaton to advance their own solutions. With victory in his grasp, Eaton found himself in a high-stakes drama that would determine America’s place in the world, and set the direction for future overseas diplomatic and military missions, all the while shoring up the need for the U.S. Marine Corps.

Chipp Reid is an award-winning reporter and editor, a licensed shp captain, historian, and Cold War veteran. His book Intrepid Sailors: The Legacy of Preble's Boys and the Tripoli Campaign was named Notable Naval Book of 2012 by Proceedings magazine.

"To The Walls of Derne tells a compelling story well, and not just because of Eaton's outstanding example of leadership or the Marine Corps proving to be a preeminent expeditionary force. Rather, as Chipp Reid suggests, the Eaton expedition raises timeless questions about the relative roles of force and diplomacy in resolving conflict, and the morality of regime change and of abandoning allies. To the Walls of Derne will become a standard account in Barbary Wars historiography." —The Journal of Military History

"To the Walls of Derne skillfully shows the price our freedom costs and the depth to which our armed forces are willing to go to defend our country." —Pirates and Privateers

"To the Walls of Derne is a quite complete history of the Barbary Wars, offering detail generally not found in most of the works on the subject." —Sea History

"Chipp Reid has done a masterful job of bringing fresh perspective to the little-known but important story of America's first overseas conflict its war with Tripoli and the Barbary pirates. In this well-researched yet highly readable book, Reid also explores in-depth the controversial career of William Eaton and highlights some of the early Republic's other leading military and political personalities. This is highly recommended reading for all students of early American military and diplomatic history." —Sean M. Heuvel, co-editor of Yankees in Nelson's Navy

“The book is energetically written, moves along at a good clip and as such is a ‘good read’. It is a useful introduction to a little-known episode in the very early days of the American Republic, and well illustrates the difficulties of civil-military relations, the consequences of divided command and control, and the unhappy effects of conflicting objectives, ambitions and directives. Lessons for the ages to be sure.” —The Northern Mariner / Le marin du nord