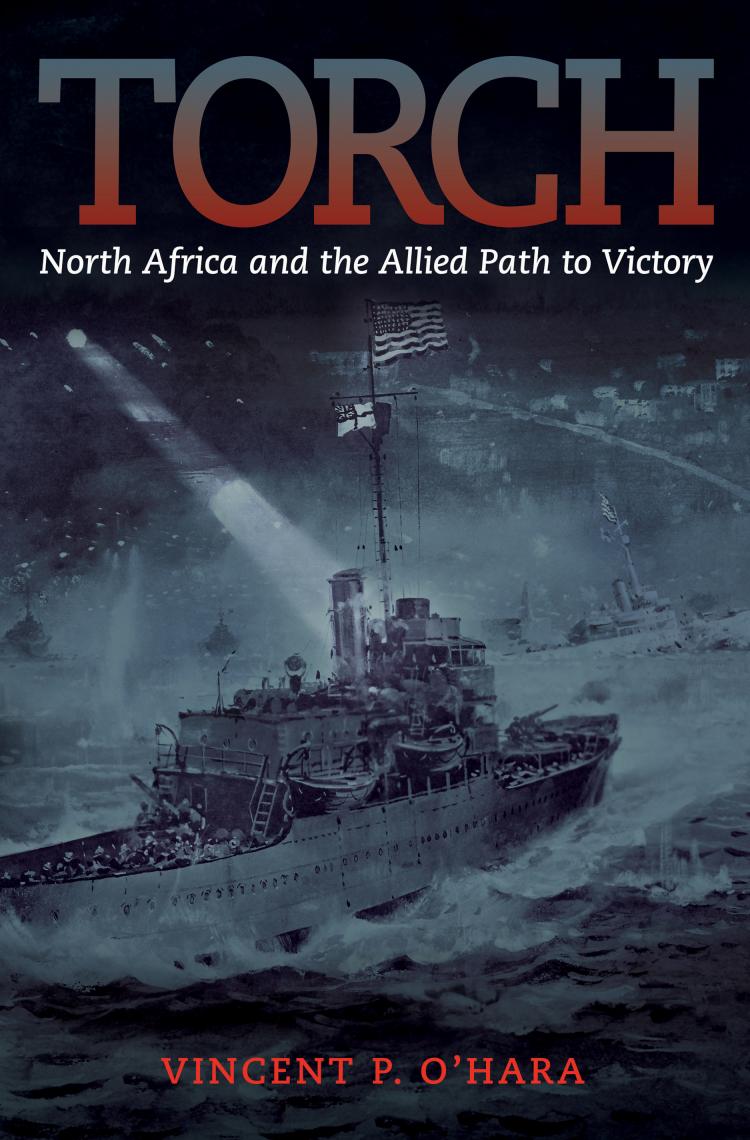 World War II had many superlatives, but none like Operation Torch—a series of simultaneous amphibious landings, audacious commando and paratroop assaults, and the Atlantic’s biggest naval battle, fought across a two thousand mile span of coastline in French North Africa. The risk was enormous, the scale breathtaking, the preparations rushed, the training inadequate, and the ramifications profound.

Torch was the first combined Allied offensive and key to how the Second World War unfolded politically and militarily. Nonetheless, historians have treated the subject lightly, perhaps because of its many ambiguities. As a surprise invasion of a neutral nation, it recalled German attacks against countries like Belgium, Norway, and Yugoslavia. The operation’s rationale was to aid Russia but did not do this. It was supposed to get Americans troops into the fight against Germany but did so only because it failed to achieve its short-term military goals. There is still debate whether Torch advanced the fight against the Axis, or was a wasteful dispersion of Allied strength and actually prolonged the war.

Torch: North Africa and the Allied Path to Victory is a fresh look at this complex and controversial operation. The book covers the fierce Anglo-American dispute about the operation and charts how it fits into the evolution of amphibious warfare. It recounts the story of the fighting, focusing on the five landings—Port Lyautey, Fédala, and Safi in Morocco, and Oran and Algiers in Algeria—and includes air and ground actions from the initial assault to the repulse of Allied forces on the outskirts of Tunis. Torch also considers the operation’s context within the larger war and it incorporates the French perspective better than any English-language work on the subject. It shows how Torch brought France, as a power, back into the Allied camp; how it forced the English and the Americans to work together as true coalitions partners and forge a coherent amphibious doctrine. These skills were then applied to subsequent operations in the Mediterranean, in the English Channel, and in the Pacific. The story of how this was accomplished is the story of how the Allies brought their power to bear on the enemy’s continental base and won World War II.

Vincent P. O'Hara is an independent scholar and the author of nine works including five published by the Naval Institute Press, most recently To Crown the Waves. His articles have appeared in the Naval War College Review, Warship, MHQ, Storia Militare, and other periodicals and journals. O'Hara was named Naval Institute Press Author of the Year for 2015. He holds a history degree from the University of California, Berkeley.

"orch sheds some welcome light on a campaign that too often is passed over. Scholars and lay readers alike will find the book useful. While O'Hara has performed yeoman service in providing this detailed account of the amphibious portion of the campaign, perhaps his greatest contribution is to restore the reputation of naval forces that, far from the offering token resistance, fought with courage and tenacity, often against superior odds... Well placed maps, tables and photos, which add value to accompanying test. This book is highly recommended for all audiences, not just history buffs." —The Mariner's Mirror

"Vincent O'Hara's fascinating and extremely accessible account of Operation Torch drew me back to a longstanding debate that some commentators continue to invoke when they describe how historians study war." —War in History

"Vince O'Hara has expertly assembled and comprehensively related all the elements of the political background, the planning and the execution of the operation. He is to be commended for including so much information about French participation. His attention to detail is, at times, stunning: Allied and French battle casualties, precise tonnage of ships sunk, even numbers of ship salvos fired per engagement. He includes a few obscure facts, too, for instance, that U.S. Navy seaplanes dropped depth charges instead of bombs on French tanks and positions. O'Hara concludes that Torch's best achievement was to teach the western allies how to plan and fight combined warfare on the strategic and tactical level and to do so quickly." —JAMP: The Journal of America's Military Past

"For historians, students, enthusiasts and scholars, this is a highly recommended book, and one that can entertain as well as explain." —Canadian Naval Review

"O'Hara's gripping operational narrative is the great strength of his book... This book's corrective to the widespread assumptions of easy success makes an important contribution to the historiography of the war in the Mediterranean and North Africa." —Michigan War Studies Review

"The author skillfully presents each complex phase the strategic considerations, the preparations, the landings themselves and the aftermath in a clear and straightforward manner which is easy to follow. Overall, O'Hara has achieved a clear and comprehensive presentation of a highly complex operation and this book can be well recommended." —Warship World

"O'Hara's background, as one of the preeminent authors of operational naval history in the United States, and the book's publisher, the Naval Institute Press, say far more about the work's true focus on military rather than political developments, emphasizing the U.S. Navy's role over that of the ground and air forces, and a preference for ship-to-ship over amphibious engagements, although the latter receives excellent coverage. O'Hara has created an enduring work of military history." —H-War

"The first U.S. offensive in the European theater in World War II was Operation Torch, the invasion of North Africa. The action involved U.S. naval air, surface and amphibious action against the navy and air force of Vichy France, which governed Morocco and Algeria. The author credits the operation with forging U.S.-U.K. amphibious cooperation, bringing France back on the side of the Allies and, ultimately, being crucial in routing the German Afrika Corps." —Seapower

"It's hard to imagine a more complete treatment of Operation Torch. ...O'Hara is a formidable scholar who apparently investigated every shred of extant documentation from all belligerents in the campaign. The narrative is probably the most comprehensive treatment of early operations in North Africa during World War II, including Rick Atkinson's outstanding An Army at Dawn, the first volume in his Liberation Trilogy." —Naval Historical Foundation Book Review

"The book offers conclusions as to the value of TORCH, stressing that it not only brought France into the Allied camp, but also helped to better forge inter-allied relations, and to refine amphibious warfare doctrine that would prove invaluable in the subsequent invasions of Sicily, the Italian mainland and France. The book is well supplied with maps and diagrams. The Notes run to some 20 pages and a host of American, British, German and Italian primary sources were consulted. Lest one think that TORCH was a walkover, one of the appendices which lists ships lost runs to four pages, many of these being Allied. The author has clearly done his homework and his conclusions are difficult to dispute in this reviewer's opinion." —Starshell, Naval Association of Canada

"This book is outstanding in many respects. The chapter which deals with the Allied situation in 1942 and the various strategic and military options which presented themselves is a tour de force; those which deal with the French position are perceptive, authoritative and balanced. The accounts of the various landings are admirably clear and supported by excellent, purpose-drawn maps, while the appendices include complete orders of battle for the Allied forces and the French." —Warship 2017

"O'Hara ponders these questions showing himself to be a 360 degree thinker, and coming to answers that it would not be right to reveal here seeing as Torch is constructed like a thriller that the reader shall read with pleasure to the very last page." —Rivista Marittima

"The book is meticulously researched and well written. The appendices are detailed providing comprehensive accounts of the French and Allied orders of battle. This work will be of use to scholars who are examining this topic for the first time, as well as those who have expertise in this subject." —The Journal of Military History

"O'Hara captures the intrigue and jealousies on both sides (US and UK) leading to both success and failure in Tunisia and how France was ultimately brought into the war. Great read; good book; well written - worthy of reading." —The Navy

"O'Hara weaves into his account a good deal of material on the complex diplomatic and political forces that affected and were affected by these operations, and takes some interesting looks at a number of people, often with telling anecdotes, including France's Admiral Darlan, who comes off as a rather better man than is usually depicted. This is an outstanding addition to the literature of the war." —The Strategy Page

"Vincent P. O'Hara delivers a concise but comprehensive narrative that seamlessly weaves together the political, strategic, and tactical elements of Operation Torch. O'Hara's ability to present both sides of this compelling story demonstrates again why he is a leading scholar of the Mediterranean theater of World War II." —Jonathan Parshall, co-author of Shattered Sword: The Untold Story of the Battle of Midway

"Vincent P. O'Hara doesn't disappoint in this gripping account of Operation Torch, the too often neglected allied amphibious assault on French North Africa in November 1942. The fog of war is ever present in this narrative which also includes fascinating insights into the convoluted politics and psychology of the Vichy regime as its military chain of command unraveled and the Germans moved rapidly to intervene." —Carnes Lord, professor of strategic leadership at the Naval War College and director of the Naval War College Press

"This well and clearly written book has been meticulously researched and, for the first time, the French situation has been well recorded. A fascinating piece of history." —Baird Maritime Australia

Renowned naval researcher Vincent P. O'Hara has written a superb account of Operation Torch: Inception, planning, detailed accounts of all five landings including the two naval battles off Oran and Casablanca, the ultimate failure to seize Tunisia, and the delicate negotiations that ultimately brought France fully into the Allied camp.ùMark E. Horan, naval researcher, co-author of A Glorious Page in Our History: The Battle of Midway, 4-6 June 1942

"Operation Torch, the Anglo-American invasion of North Africa in November 1942, was not merely the first Allied counterattack against the Axis in World War II, it was at the time the largest amphibious assault in world history. In this detailed and comprehensive study, Vincent P. O'Hara effectively integrates the tangled politics of the campaign with vivid operational detail to provide a full picture of this complex and pivotal event." —Craig L. Symonds, author of Neptune: The Allied Invasion of Europe and the D-Day Landings