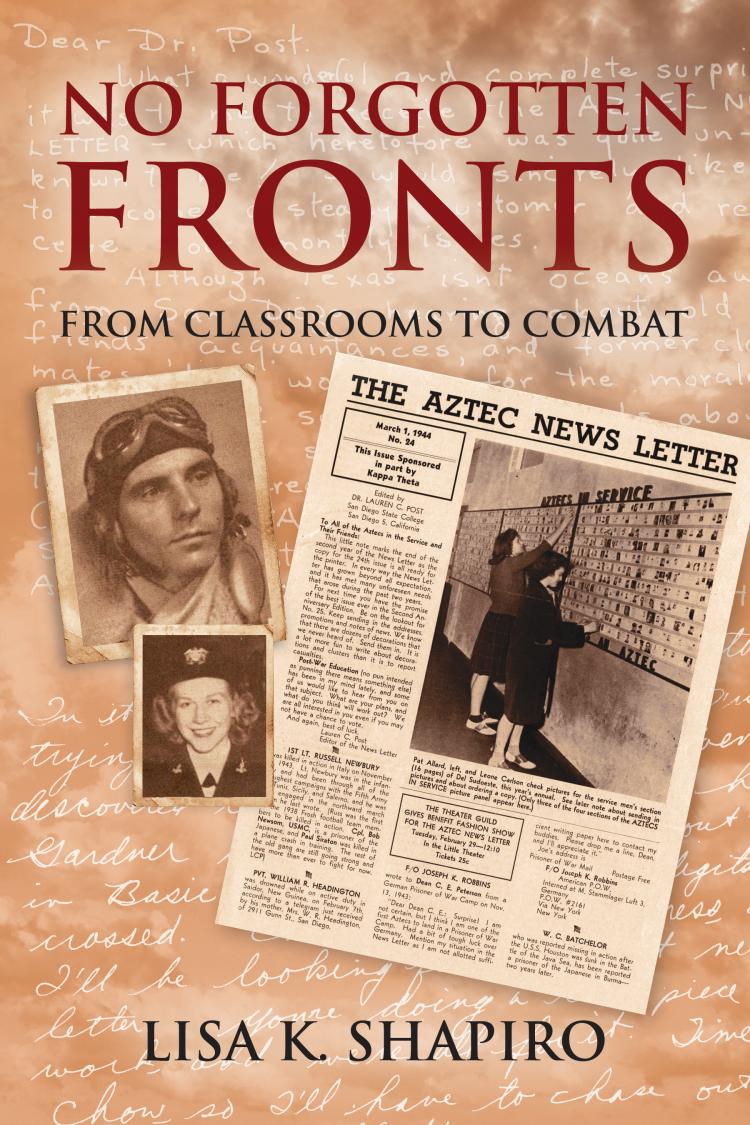 At the beginning of World War II, professor Lauren Post, San Diego State College, asked his students entering military service to write to him. Thousands of letters arrived from places like Pearl Harbor, North Africa, and Normandy, beginning with the salutation, “Dear Doc,” and describing vivid accounts of training, combat, and camaraderie. Pilots wrote about seeing planes shot down. Men in POW camps sent word about the location of other prisoners and Dr. Post passed information on to frantic families. Mothers, hoping for news about missing sons, clutched at the details. These intimate, first-person accounts capture honest, in-the-moment reactions to war that resound with heartache and gratitude.

Each month, Dr. Post excerpted the letters and mailed the Aztec News Letter around the world. Fraternities, typing classes, and families donated time and money for printing and postage. When the latest issue arrived, servicemen and women read it cover-to-cover, and then passed it to another Aztec in service.

Dr. Post produced and mailed a newsletter each month for four years. He sent pilots Aztec stickers to put on their planes. Soldiers sent him Nazi flags and sand from Iwo Jima. He tallied up the medals they earned and took time to call their mothers. He couldn’t rest until he knew that every student who had been taken prisoner was released.

For years afterward, men and women dropped by his small campus office to thank him for helping them make it through the war. This is the story of the devotion of a remarkable college professor who held his students, their campus, and an entire community together during World War II. These students fought for democracy and to preserve a cherished way of life that included football, Coca-Cola, and Sadie Hawkins dances. Their correspondences to one beloved professor describe an American perspective of war that shines with idealism, determination, raw grief, and the power of friendship.

•A story of struggle and sacrifice that shines with friendship, humor, grief, and a genuine belief in American ideals

Lisa K. Shapiro began teaching in 2003, and her community college classrooms have always been filled with veterans. As a creative writing instructor, she encouraged the soldiers, sailors, and Marines who were transitioning back to student life to put their stories on paper.

“Author Lisa Shapiro combined short descriptions of the war’s progress with the letters in order to provide context for readers of this remarkably valuable volume.” —San Diego Jewish World

“No Forgotten Fronts is a vivid reminder of the importance of letter writing and the printed word for service members and their friends and families during the war. Such writing was an emotional and psychological lifeline stretching thousands of miles around the globe from the safety of the United States to the dangers of the battlefield. The book is emotionally captivating and intellectually enlightening and recommended for anyone wishing to understand these aspects of the experiences the Second World War from the first-hand perspective of U.S. military service members.” Cercles

"The simple, beautiful, profound prose' conveys 'for me the meaning of war,' Shapiro writes, and she is correct." —Military Times 2018 Summer Reading Guide https://www.militarytimes.com/off-duty/2018/06/21/seal-strength-girl-power-and-more-military-times-2018-summer-reading-guide/

"No Forgotten Fronts is a vivid reminder of the importance of letter writing and the printed word for service members and their friends and families during the war. Such writing was an emotional and psychological lifeline stretching thousands of miles around the globe from the safety of the United States to the dangers of the battlefield. The book is emotionally captivating and intellectually enlightening and recommended for anyone wishing to understand these aspects of the experiences the Second World War from the first-hand perspective of U.S. military service members." —Cercles

"This is quite a remarkable book, the true story of a college professor who started a newsletter with his wife for his former students who were off at war.... [This is] an incredible resource for modern readers. For those who need historical background for each group of letters printed here, the author does an excellent job of presenting concise explanations of the events of the day and the war theaters in which they were taking place." —WTBF-AM/FM

"Compilations of personal letters, diaries, and journals for publication extend primarily in United States history, from the Civil War to the present. This volume presents letters which were sent to a professor of geography at then-San Diego State College during World War II. Excerpts of these letters were included in a newsletter which was mailed to those SDSC Aztec students who were serving in the military, at home and abroad.... With much of the World War II generation having passed away, these letters are invaluable in giving those of us who have come after an opportunity to again appreciate the effort and sacrifice made on our behalf, as well as the viewpoints of those who lived through the destruction and life's disruption of the world's greatest conflict. For a look at an academic segment of American society in the 1940s, this volume is recommended." —The Journal of America's Literary Past

"A beautiful message of the power of one person to make a difference in the world, even in time of war. This book is a reminder to all of us that simply bearing faithful witness to the profound, the mundane, and the profane can be sacred work."—Rev. Jan Christian, author of Leave No Brother Behind: A Sister's War Memoir

"Professor Shapiro captures the essence of Dr. Post's students' grief, anxiety, loneliness, and desire to locate their friends or know how they were able to survive during the war. The book is a testament to the human spirit that never gives up amidst challenges. Letters are messages from the heart, and the reader will be brought to the hearts and minds of those heroic families who fought for our freedoms and the preservation of our values."—Raquel R. Ramsey, executive producer of Never Surrender: The Ed Ramsey Story

"I could not put this book down! No Forgotten Fronts compellingly weaves history with the actual words of San Diego State soldiers during World War II and Dr. Lauren C. Post, their professor on the home front, in a way that demonstrates without question the role of support each person played for all the others."—Dr. Susan Dersnah Fee, supporter of the American War Letters Project

"Shapiro brilliantly captures the stories of men and women from one college who met the call to service, and vividly outlines a lesson in the value of communal connection. Through these true stories, the reader is immersed in the entire spectrum of emotion experienced by service members around the world, and their loved ones during World War II. Much like Dr. Post's efforts to keep a community bonded, Shapiro connects us with their words across time's boundary."—Derek Abbey, 23-year Marine Corps veteran, higher education specialist, expert researcher, and Board Member with the BentProp Project, active in locating, identifying, and recovering POW and MIA Americans from World War II and other conflicts

“The intimate, first-person accounts captured honesty, sympathy, raw grief, and wonder. The tales shared by these articulate, college educated men and women are often dramatic, like parachuting through anti-aircraft fire into Normandy, or digging in with the Women’s Army Corps behind the front lines in North Africa. These collected, individual moments add up to something greater than the sum of the parts. The letters shine with a belief in country, and a desire to work for the common good.” —The Scuttlebut: Library Log