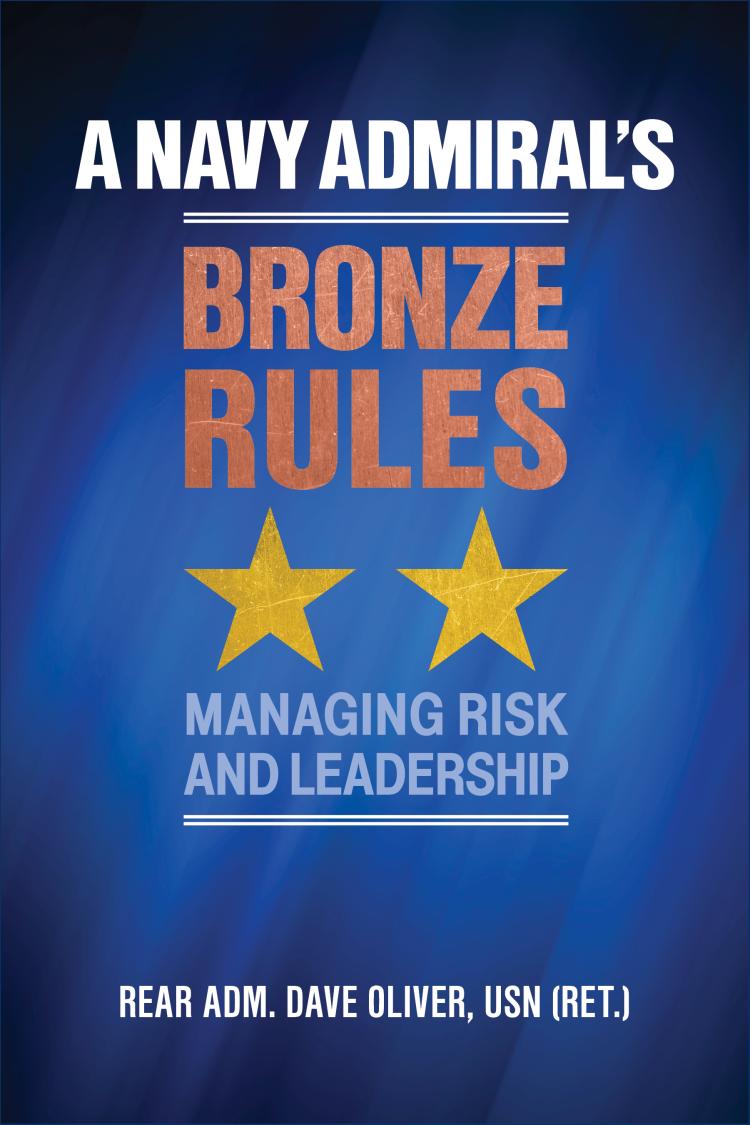 A Navy Admiral's Bronze Rules uses case studies to explore the inherent risks of leadership and the tools available to those who nevertheless wish to take those chances. Real world examples are used and inevitably expose hitherto unrevealed history. The latter includes a secret of the Yom Kippur War, the background of the 1986 bloodless revolution in the Philippines, how Admiral Bud Zumwalt was such a unique Chief of Naval Operations, why our National War Plan suddenly had to be revised during the Reagan years and what spurred President Clinton’s anti-nuclear proliferation success.

Rear Adm. Oliver sketches the problems a leader will routinely (and not-so routinely) face. He invites the reader to consider the attributes which will help best prepare them for future challenges. These thirty case studies demonstrate that few real leadership problems will yield to a “one-hammer” solution. No matter how good a practitioner may become with one leadership style, one knock-them-dead ability seldom serves to get a leader all the way through their problem or conflict. Adm. Oliver thus provides a range of tools for different personalities and situations. The potential leader thus has a range of solutions to fit the problem as well as an individual’s personal comfort zone.

Rear Admiral Dave Oliver, USN (Ret.) is a 1963 graduate of the U.S. Naval Academy who spent thirty-two years in the Navy, served at sea on board both diesel-electric and nuclear submarines, commanded a nuclear submarine, and served as chief of staff of the Seventh Fleet. His final military tour was as principal deputy to the civilian Navy acquisition executive. During the Clinton administration he was Principal Deputy Undersecretary of Defense for Acquisition, Technology and Logistics and in the Bush administration he was the director of management and budget for the Coalition Forces in Iraq. After leaving the Navy he was the CEO of the EADS, North America Defense Company as well as an executive at Northrop Grumman and Westinghouse.

"Dave Oliver had a ringside seat for some of the most significant events that attended the collapse of the Soviet Union. This fascinating book describes some of those events. In reading the book you will learn that Dave was not only an observer but a doer; indeed, some of these remarkable events may never have occurred had it not been for Dave’s bold actions." —Hon. Bill Perry, 19th Secretary of Defense

"An irresistible page-turner of compelling vignettes which give detailed insights into high stakes historical drama. What can be learned? An eye-level sketch of rationales of creative risk takers whose individuality and personality stepped out from the norm of institutional or society’s mold and pushed for change and transformation. We are given decades of accumulated wisdom of the author and those mentors from whom he learned – Rickover, Zumwalt, Rumsfeld…… Through the internal periscope of their successes and failures, we are compelled to assess the inventory of our own individual strengths, the weakness of our strengths, or perhaps even the strength of our individual weaknesses." —Ann Zumwalt, Registered Nurse, Daughter of Admiral (Chief of Naval Operations) Elmo Zumwalt and Mouza Zumwalt

"Oliver draws from a remarkable career of Navy leadership, submarine operations and national security challenges to produce a can’t-put-it down read." —Arthur C. House, Chief Cybersecurity Risk Officer for the State of Connecticut

"Do you think you could do a better job of running this place? Are you missing some of the secrets of being an inspirational leader? This book provides actual case studies that will help senior officers and executives fill out their resumes for top positions." —Rear Admiral Bill Houley, Former Director of the Defense Reform Initiative and holder of eight Legions of Merit

"I have had the pleasure of working with Admiral David Oliver while serving in the Pentagon from 1987 to 1992. He has quietly executed some very risky missions for our country while serving in U.S. Submarine Force. During his Naval Career, he demonstrated incredible leadership abilities that had a major impact on the Navy. Many of these are presented in this book." —Hon. Robert C. McCormack, Venture Capitalist, Deputy Under Secretary of Defense and Assistant Secretary of the Navy

"When I was first mentoring young scientists and engineers trembling on the verge of sampling the poisoned chalice of management, I would encourage them to read military history. To me, such histories provide a fine source of case studies of decision making in circumstances of uncertain data, resources, and boundaries. I still believe that. Dave Oliver has gone me one better however. His personal stories show how one must involve one's values in building a team that performs well not just technically but at high ethical and interpersonal standards, insuring its long term success. In addition, the stories are often hilarious, pulling one through at a fabulous pace. I recommend this great read for anyone building, or rebuilding, a team for high quality performance." —Dr. Jay C. Davis, First Director of the Defense Threat Reduction Agency and senior Livermore executive

"Leadership is highly personalized and is constantly adapting to one’s life experiences, good and bad. Smart leaders also learn from other leader’s life experiences. What Admiral Oliver has put together in his remarkable book is essentially a graduate level course of various case studies of his real world leadership challenges. I’ve known Dave Oliver for over 30 years and one thing has always been true....he tells it as it is. No one is a born leader. Leadership is a learned behavior. Some never learn to lead. Some struggle with it. Others simply give up. This book can help you hone your leadership skills if you really immerse yourself in each of the chapter’s leadership case studies. Enjoy the read and thank Dave Oliver for sharing some of his tougher leadership challenges in his amazing life story." —Rear Adm. John Jolliffe, U.S. Navy Information and Transportation Brokerage Executive

"Sailors tell sea stories . . . and Dave Oliver certainly has most interesting stories from his extraordinary career. They’re almost worth the price of the ride alone. But it doesn’t begin to end there. Oliver makes each adventure a learning opportunity about leadership. Often life-threatening events where a clear sense of direction and a deep understanding of one’s self ultimately prevail. So, this book is, at the same time, both fascinating, interesting . . . and deeply provocative and useful. Great insights that for me are just a little too late. I really needed to read this book when I was a lieutenant." —John L. Petersen, The Arlington Institute Founder and President

"In this book, Dave Oliver’s exceptional leadership wisdom adds to the legacy of his successful 1992 book Lead On! Just as he taught me at the Pentagon, his engaging leadership examples teach us that leadership is about the personal strength, character and insight, to lead into risk when risk is needed." —Dr. Marv Langston, First Navy and DoD Chief Information Officer

"Most leadership books are warmed over truisms. David Oliver’s advice has originality, nuance and wisdom, all in the context of some great stories like getting the fingerprints off a salt shaker from a breakfast meeting to prove the identity of a foreign leader. I worked intensively with David for five months in Iraq in 2003. This book is pure David, insightful and fun." —Peter McPherson, Chairman of Dow Jones, President of Michigan State University and Administrator of USAID

"Dave Oliver is an extraordinary story teller—and practitioner of the art of leadership. He has applied his considerable talents to create a powerful and practical compilation of real life experiences relevant to leaders at all levels. Oliver combines the reality of actual experiences with insightful analysis to reveal the multidimensional keys to effective leadership. His medium is vignettes of starkly real circumstances, in matters of considerable consequence, often of historical importance. In their narration, he clearly differentiates between mechanistic principles of management from the qualitative, human, judgment based qualities that enable the engagement and empowerment of people; thereby creating the alignment necessary to address the real life challenges of organizational performance. This is leadership in action. The bonus is that it contains untold military history that is informative to any student of the Cold War." —Ralph D. Crosby, Jr., Former Senior Defense Industry Executive in the United States and abroad