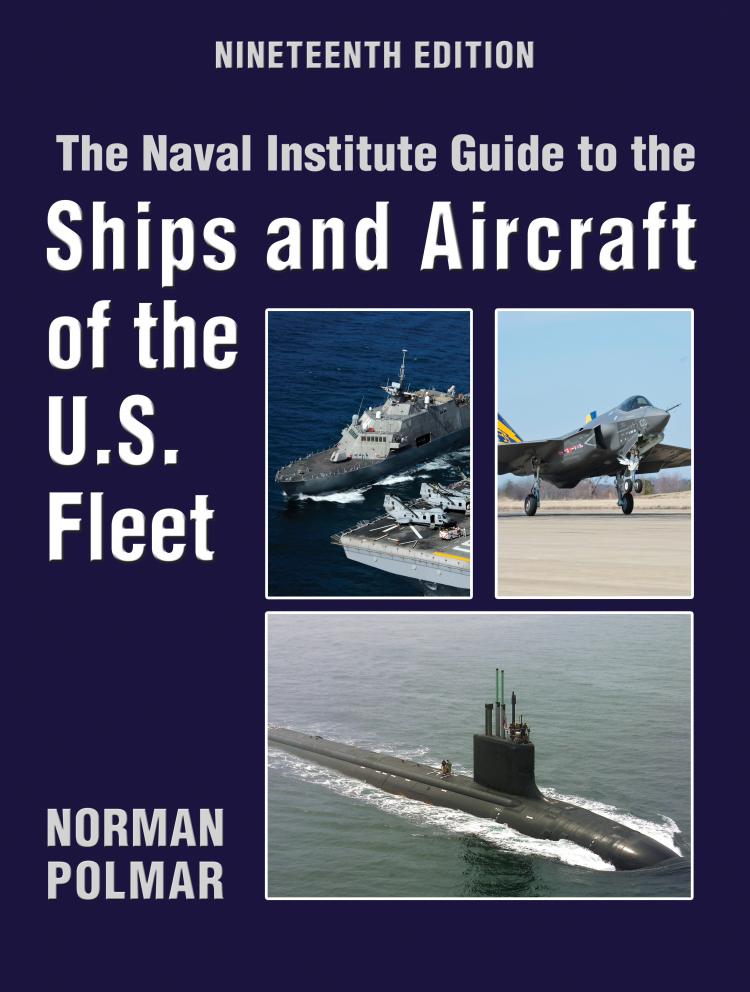 The Naval Institute Guide to Ships and Aircraft of the U.S. Fleet, 19th Edition

This updated, 19th edition of The Naval Institute Guide to the Ships and Aircraft of the U.S. Fleet meets the high expectations and exacting standards of those who rely on this volume to stay informed and to make related policy, force level, technological and weapons decisions related to the U.S. Navy.

Continuing the longstanding tradition as the most complete resource of its kind, this updated 19th edition meets the high expectations and exacting standards of those who rely on this volume to stay informed in the field.

“In its nineteenth edition, this classic just gets better and better...If you really need, or are simply interested in, a very thorough update on the current state of the ships, boats and aircraft–and their weaponry–of the U.S. fleet, this is where to get it...There is no better source of this vital information.” —Ausmarine

“It is a remarkable achievement for any book that is not the scripture of a major religion to reach its nineteenth edition. Come to think of it, our naval services are a kind of religion, and Norman Polmar, if not its apostle, is one of its major prophets...[The book] is an essential resource for anyone who needs to analyze, procure, plan for, organize, train, equip or understand America's bewildering variety of naval platforms, programs and systems...Ships and Aircraft of the U.S. Fleet is a dependable reference providing balanced and objective assessments that speak truth to power.” —DefenseMediaNetwork.com

“This work is a visual tour de force that will please both naval professionals and interested readers...the flagship upon which any serious study of the U.S. Navy must embark. Summing Up: Highly recommended.” —CHOICE

“...The undisputed single edition bible of the US Fleet since [the Guide] was acquired by the publishing arm of the United States Naval Institute several decades ago. Retaining noted naval authority, author, and historian Norman Polmar as editor proved to be a wise choice, for Polmar infuses each edition with much of his vast background on all things US Navy...A first-rate reference guide compiled by a first-rate author.” —Sea Classics

“Everything about this book exudes the quality that the reputations of both publisher and author(s) promise. A tome of such breadth, depth and sheer weight is deserving of the world's largest and most powerful navy. This guide, which was already the best most comprehensive source of information on the ships and aircraft of the U.S. Navy and the Coast Guard is even better than ever.” —Warships International Fleet Review

“Norman Polmar, with this work and his many earlier books–he has 50 to his credit–and other writings, is the most mature and significant of naval affairs thinkers as the West has seen in recent decades. He is clearly the strong successor to Capt. John Moore, RN, the legendary British naval intelligence officer and submariner who gave Jane's Fighting Ships its great authority during the Cold War years. And he is a worthy successor, too, to Admiral Alfred Thayer Mahan and Theodore Roosevelt, who could see what the US needed to do to command the seas, and had the persuasion to see it implemented. This great book is a bargain; it is a potion to clear the head the morning after the drunken run–ashore the US has enjoyed in the heady pay-days of the past couple of decades.” —Defense & Foreign Affairs Special Analysis and D&F's Strategic Policy“No one can doubt that this book is the best and most complete overview of the most powerful navy in the world, conceived for specialists and for decision-makers, but available also for the general public.” —JP4 MENSILE DI AERONAUTICA (and PANORMA DIFESA)“If you really need, or are simply interested in, a very thorough update on the current state of the ships, boats, and aircraftùand their weaponry–of the U.S. fleet, this is where to get it. There is no better source of this vital information.” —Work Boat World