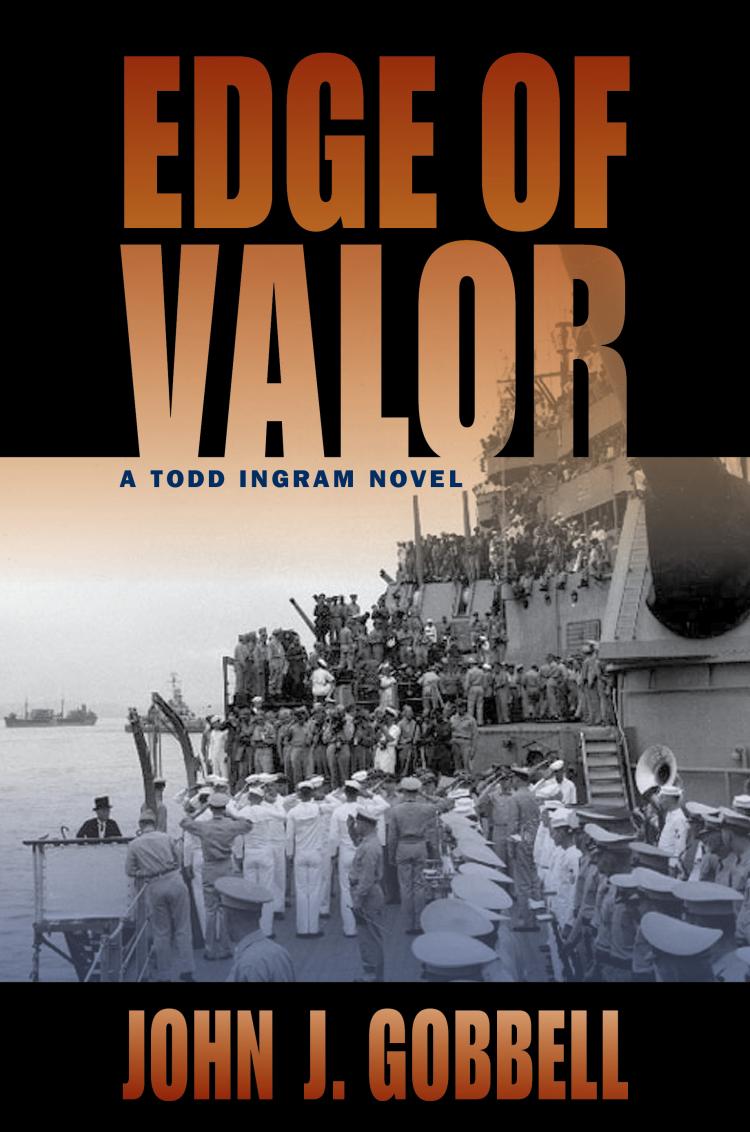 Edge of Valor is the fifth thriller by John J. Gobbell featuring the World War II exploits of Cdr. Todd Ingram, commanding officer of the destroyer USS Maxwell (DD 525) who saves his ship when it is hit by a kamikaze off Okinawa. For repairs, they pull into Kerama Rhetto, Okinawa, where they receive news of the war’s end. Ingram expects to be shipped home like the rest of his crew but instead receives orders to fly to Manila, where he is met by Brig. Gen. Otis Dewitt, an Army buddy from his days on Corregidor who is now intelligence aide to Gen. Richard K. Sutherland, chief of staff to General MacArthur. On Ingram’s C-54 are sixteen Japanese senior military and civilian diplomats who meet with Sutherland to discuss formal surrender arrangements. Two days later the terms are settled and Ingram is working with one of the Japanese delegates to ensure that mines laid in Tokyo Bay are neutralized, allowing for safe passage of more than two hundred Allied ships. While Ingram is promised that he can attend the surrender ceremony on board the USS Missouri (BB 63), DeWitt, in concert with the State Department, has an ulterior motive and sends Ingram to Karafuto (Sakhalin Island, according to Soviet maps) to defuse a Soviet attack on Hokkaido, the northernmost home island of Japan. Ingram’s old adversary, Edward Dezhnev, is the brigade commander responsible for laying siege to a Japanese holdout garrison in Toro, a natural jumping-off place for an attack on Hokkaido.

Also in Toro, DeWitt explains, is Walter Boring, a Red Cross representative holding two crates of overwhelming photographic evidence of Japan’s experiments on live human beings in China. Ingram is expected to return with those crates, but how can he when Boring is being protected by the Japanese garrison in Toro, where Dezhnev and his troops stand ready to overpower them at any moment?

As his shipmates prepare to return to their loved ones, Ingram’s war continues. Three weeks earlier he had been fighting the Japanese, and the Russians were supposed to be friends. Now he doesn’t know whom to trust.

John J. Gobbell is a former Navy Lieutenant who saw duty as a destroyer weapons officer. His thirty plus year career in executive recruiting gave him added insight into character development for his novels. The Edge of Valor is the fifth of five stand-alone novels in the Todd Ingram series. Altogether, he has written seven historical thrillers involving the U.S. Navy � Pacific Theater --and is currently at work on his eighth. He and his wife, Janine, live in Newport Beach, California. His website is at www.JohnJGobbell.com and he can be reached at [email protected]