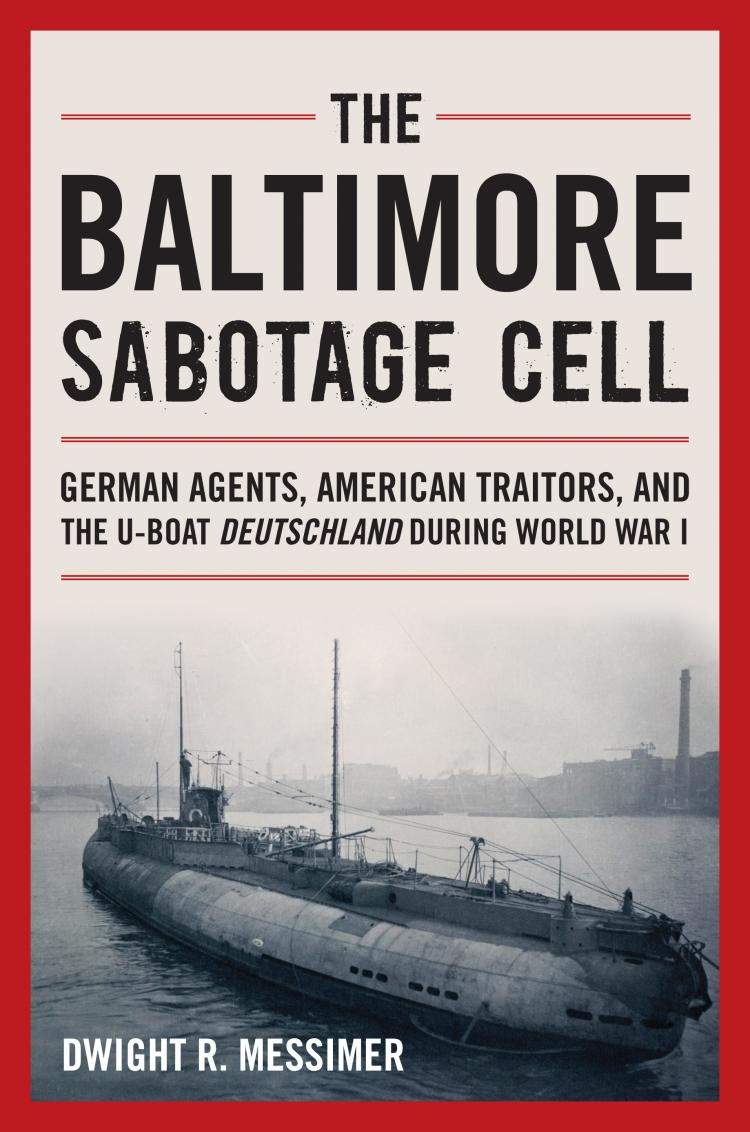 By the summer of 1915 Germany was faced with two major problems in fighting World War I: how to break the British blockade and how to stop or seriously disrupt the British supply line across the Atlantic. Th e solution to the former was to find a way over, through, or under it. Aircraft in those days were too primitive, too short range, and too underpowered to accomplish this, and Germany lacked the naval strength to force a passage through the blockade. But if Germany could build a fleet of cargo U-boats that were large enough to carry meaningful loads and had the range to make a round trip between Germany and the United States without refueling, the blockade might be successfully broken.

Since the German navy could not cut Britain’s supply line to America, another answer lay in sabotaging munitions factories, depots, and ships, as well as infecting horses and mules at the western end of the supply line. German agents, with American sympathizers, successfully carried out more than fifty attacks involving fires and explosions and spread anthrax and glanders on the East Coast before America’s entry into the war on 6 April 1917.

Breaking the blockade with a fleet of cargo U-boats provided the lowest risk of drawing America into the war; at the same time, sabotage was incompatible with Germany’s diplomatic goal of keeping the United States out of the war. The two solutions were very different, but the fact that both campaigns were run by intelligence agencies—the Etappendienst (navy) and the Geheimdienst (army), through the agency of one man, Paul Hilken, in one American city, Baltimore, make them inseparable. Those solutions created the dichotomy that produced the U-boat Deutschland and the Baltimore Sabotage Cell. Here, Messimer provides the first study of the degree to which U.S. citizens were enlisted in Germany’s sabotage operations and debunks many myths that surround the Deutschland.

Dwight R. Messimer is a U.S. Army veteran and former lecturer in history at California State University San Jose. His most recent book is The Baltimore Sabotage Cell: German Agents, American Traitors and the U-boat Deutschland during World War I. He resides in Northern California.

"This subtitle of this fascinating book, 'German agents, American traitors and the U-boat Deutschland during World War I', gives an indication of the wide-ranging subject matter.... Messimer tells the story well, using a wide range of sources to create a strong sense of time and place, and investigating the wider issues concerning wartime neutrality that were raised in the USA by Deutschland's visits." —Warship 2017

"This exhaustively-researched book adds to a larger narrative about how distant wars can affect our shores. It also shows the ways in which our fellow citizens can turn the places we live and work into the front line."—The Daybook

"The Baltimore Sabotage Cell is extremely well-researched, with the author making good use of material from captured German naval records, material from the Bureau of Investigation, files of the State Department, newspaper reports, to name just some of the sources; needless to say, he demonstrates as well a thorough mastery of the secondary literature. Strongly recommended because it combines so many different aspects of the war at sea during the First World War into a highly readable and illuminating narrative for both the non-specialist and the naval historian alike."—International Journal of Maritime History

"Dwight D. Messimer has presented an informative work that offers more than just another illustration of the U-boat war. The hitherto neglected topic of espionage and sabotage - with the broad activities of the other side also awaiting discovery - is presented in this book in an exciting and versatile way." (Translated from German)—Militèrgeschichtlichen Zeitschrift

"In these days of increasingly 'multi-cultural' populations in many countries, particularly richer ones, senior politicians and bureaucrats would be well advised to read and carefully digest this book. It is what might be termed a 'cautionary' tale. In any case, it is a fascinating tale and, thinking about it, you could easily see similar things happening in current circumstances where multiple passports are sometimes carried and loyalties divided. This story concerns German/Americans in the period of the First World War before the United States joined the fray. It clearly shows what did go wrong then and what could just as easily happen now. If nothing else, governments and their intelligence services must be eternally vigilant and carefully aware of the activities of those whose loyalties may be divided. It's exciting stuff based on blockade running, espionage and sabotage."—Baird Maritime.com

"Messimer shows a masterful grasp of both American and German archival material and manages to blend the two into a convincing and entertaining tale... - The Historian

"Messimer provides a definitive account of U-Deutschland's career, which, blended with true-life tales of spies and saboteurs, makes for a fascinating read that is utterly engrossing."—Warships International Fleet Review

"After reading the first few chapters of Dwight Messimer's The Baltimore Sabotage Cell, this reviewer was not sure if it was a spy novel or a work of history. Superbly researched with extensive explanations of context, the book is certainly an important addition to World War I historical scholarship. Few historians possess a command of the sources on these linked subjects, and Messimer skillfully mines German and American documents to support his narrative. His ability to weave important context into the storyùsuch as race relations, diplomatic negotiations, industrial requirements, and American traitorsùmakes The Baltimore Sabotage Cell a fascinating study."—Naval History

"In this meticulously researched and engagingly written book, Dwight Messimer tells the story of how the Germans used sabotage and submarines in an attempt to drive a wedge between the tightening Anglo-American alliances in World War I. The Baltimore Sabotage Cell throws the extensive German covert action apparatus in the northeastern United States into sharp relief and adds much to our understanding of intelligence operations and commercial warfare in the early twentieth century."—Thomas Boghardt, author of The Zimmermann Telegram: Intelligence, Diplomacy, and America's Entry into World War I

"Espionage, intrigue, amazing innovation, and white-knuckle diplomacyùDwight Messimer has uncovered one of the most amazing tales to emerge from the Great War. Mr. Messimer's story of a large and conflicted Baltimore German American community adds important new evidence about America's fateful decision to enter the conflict."—Burt Kummerow, President and CEO, Maryland Historical Society

"Dwight R. Messimer's book The Baltimore Sabotage Cell deals with long-forgotten episodes of World War I history. In his well-written account he sheds new light on the extent of the sabotage operations, carried out by German agents with the support of American citizens. Everybody interested in the history of World War I in general and naval or intelligence history in particular should read this remarkable book."—Prof. Dr. Michael Epkenhans, chief historian at the Centre for Military History and Social Sciences of the Bundeswehr, Potsdam, Germany; editor of The Schlieffen Plan: International Perspectives on the German Strategy for World War I