We Are Different, But We Are All Shipmates

I don’t know if you’ve noticed, but we are different. Some of our differences, such as the color of our skin or our genders, are apparent. Others—our religious beliefs or sexual orientation, for example—are not so obvious.

Throughout our time in the Coast Guard, we have been asked on numerous occasions, “Why did you join?” We, like most of our shipmates, joined to serve our country and make a positive difference. We share the Coast Guard’s core values of honor, respect, and devotion to duty. So, if we share the same values, why do you treat us differently?

It is easy to assume everyone experiences the service the way you do, but in reality, they do not. On some level, our experiences are the same. We all have the same uniform standards, servicewide exams, and operational/nonoperational qualifications. However, as people who are different, on another level we go through most of these things in an atmosphere of heightened tension. It affects the way we are able to perform our duties and complete our missions. At times we have wondered, do our shipmates care? If you do, we would like to share our experiences.

Have you ever been the only one of your “kind” at your unit or in your office? Imagine being the only woman at your sector, small boat station, or Coast Guard training facility in your department and feeling totally alone. During our time in service, we have spent countless hours alone in female berthing. We have missed important discussions, pertinent information, and decisions because they happened behind the doors of male berthing or in an office and no one thought to include us. 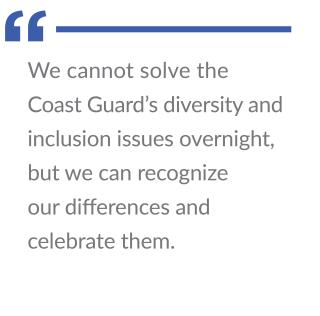 Have you ever been told you were not wanted on the crew because others cannot be themselves around you? They can’t tell dirty jokes, release bodily functions, or make sexist remarks because of your presence. Have you been told to get off the boat and go back to filing or that the dishes in the galley require your attention? We have.

Women have been performing Coast Guard duties longer than there has been a Coast Guard. From 1776, when Hannah Thomas became keeper of the Gurnet Point Light in Massachusetts, women have served in various ways. Why are we still having the same problems?

In a 2019 RAND Corporation study, the number one reason women gave for leaving the Coast Guard was lack of leadership and toxic commands full of the “old boys club.” Do you worry about not being part of the club and wonder how that could affect your career, opportunities, and future? We do.

Have you ever been called “morale gear”? We have. We also have had to deal with wives worried we would make a move on their husbands while at work and have been misjudged as flirting with coworkers if we talk to one man for longer than five minutes.

Has your direct supervisor ever said he wished you didn’t have children to take care of? Have you been asked why on short notice you can’t take them to a place like they have for dogs, like a kennel but for kids? Did you ever hear that you should have thought about your duties before deciding to become a single parent? We wish we were joking.

The RAND study found that the second most common reason women give for leaving the service is gender bias and discrimination. Do you wonder whether your actions, words, or attitudes could be a reason a shipmate would leave the service? Have you considered what you could do to help? Have you stopped to listen to us, her, him, they—the people who are different and through small ways are shown that every day?

This letter is not about judging or belittling anyone. The fact is, we are shipmates. Every one of us must understand there are differences, recognize the challenges those who are different face, and acknowledge that the issues are more widespread than the service might admit.

We cannot solve the Coast Guard’s diversity and inclusion issues overnight, but we can recognize our differences and celebrate them. We can acknowledge that color, gender, sexual orientation, or religion do make us different and can change the way we are treated—and that we can do something about it. We can stop looking at difference as a negative. Together, we can change.

Petty Officer Laughlin recently left active duty after 13 years, serving the last two as curator at the Coast Guard Museum. She currently is the public affairs officer for the U.S. Naval Submarine School in Groton, Connecticut.

Petty Officer Williams is stationed at Coast Guard Recruiting Command, recruiting out of the Potomac Mills Office in Woodbridge, Virginia. A 13-year Coast Guard veteran, she was awarded the Coast Guard Achievement Medal and currently is pursuing an associate of applied science degree.

By Commander Natalia Best, U.S. Coast Guard
Across all ranks, women continue in the Coast Guard at a lower rate than their male peers.
Commentary

Charting a Course to Inclusion

By Lieutenant Angel Kwok, U.S. Coast Guard
To create a lasting cultural shift that embraces inclusion, the Sea Services must embrace gender neutrality.
P Nobody Asked Me, But . . .

By Lieutenant Commander Jean Anne Kim, U.S. Navy
When leaders make assumptions about what is feasible for junior sailors based on surface-level demographics, they do their sailors a disservice.