Focus on the Marine Corps

Proceedings has never measured its success or impact by the number of flag officers who contribute. On the contrary, we have always been proud of how many of the best ideas in the open forum come from junior officers and enlisted professionals. That is not to say that flag officers don’t contribute a lot, too, but often the greatest value service chiefs provide in these pages is to identify the challenges their services face. A problem identified by a service chief is one for junior writers to solve.

The Marine Corps Commandant, General David Berger, has written for our November issue every year during his tenure as the top Marine, and every year, Marines, sailors, and Coast Guard members have offered solutions and suggestions in response to the Commandant’s articles.

This month, General Berger addresses a big problem facing not just the Marine Corps but the entire joint force. “Recruiting Requires Bold Changes” offers an unvarnished perspective on recruiting and retention headwinds. It will resonate with readers and, I hope, spur many young people to offer ideas. While General Berger stops short of suggesting it, his article may raise the specter of reinstating a draft or mandatory service. 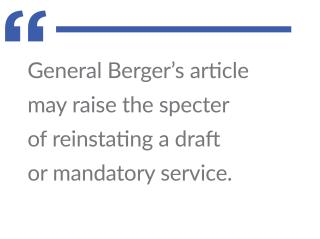 The winners of the Naval Institute’s annual Marine Corps Essay Contest appear in this issue. We received a record 97 entries this year. Major Dustin Nicholson, U.S. Marine Corps, took first prize with “Marines Need Regenerative Logistics.” As the Marine Corps iterates Force Design 2030, the topic of logistics is garnering a lot of attention. Last year’s winner, Navy Lieutenant (j.g.) Jeong Soo Kim, won second prize with “Beyond Force Design 2030 Preparing for Fourth-Generation Combat.” And third prize went to Lieutenant Julie Roland, U.S. Navy, for “Reimagine Recruiting to Prevent Sexual Assault.” Her article minces no words, and it will be tough for many to read. But it offers ideas to address several concerns Commandant Berger raises. Special thanks to members of our Editorial Board and Board of Directors who served as judges on this contest!

This month’s American Sea Power Project contribution tells us “How to Rebalance the Navy’s Strategic Culture.” Retired Navy Captain Scott Mobley posits that the Navy functions best when the operational, technocratic, and strategic cultures in the service have equal influence.

One of my favorite monthly departments is Leadership Forum. This month, Marine Captain Michael Hanson, a weapons company commander, debunks a common leadership adage. In “Lead From the Front? Not Always,” he writes “A leader’s weapon is his unit. . . . the purpose of the leader is to employ his unit just as the rifleman’s job is to employ his rifle. . . . the leader must lead from the point of influence . . . That often will not be from the front.”

It is hard to believe 2022 is coming to a close. The January 2023 issue will kick off the Naval Institute’s 150th anniversary year. Each issue in 2023 will feature a bonus section reviewing Proceedings content on a specific topic throughout our history. You will not want to miss it! 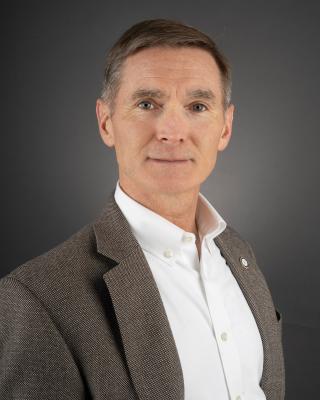 By Bill Hamblet
Each October, Proceedings is proud to focus on the submarine force and undersea warfare.
P Editor's Page

Congratulations to the winners of this year’s Naval Institute Coast Guard Essay Contest!