The 2021 WEST Conference will take place on 29 and 30 June 2021. Due to the ongoing closure of the San Diego Convention Center, this year’s WEST will take place virtually. However, the event will feature the same stellar programming we have always offered with defense and maritime leaders. This year’s theme is: “What is the Promise and Progress of Naval Integration?” All three Sea Service Chiefs have been invited to participate. Learn more at www.westconference.org.

Following the success of last year’s Annual Meeting, the 2021 meeting will once again be held virtually on 19 May at 4:00 pm EDT. The meeting will include an update on the state of the Institute and recognition of the 2020 Naval Institute Authors of the Year and General Prize Essay Contest winners. The Honorable James. F. Geurts, performing the duties of Under Secretary of the Navy, has been invited to be our featured speaker. We wish to thank our sponsor, Leonardo DRS for making this event possible. Register and learn more at www.usni.org/annualmeeting.

The General Prize Essay Contest (generously funded by Andrew and Barbara Taylor) is the Naval Institute’s oldest and most prestigious contest, dating back to 1879. The list of winners in its 141-year history is a “who’s who” of naval thought leaders—most of them winning this contest long before they reached their pinnacle ranks, including Lieutenant Ernest J. King, Lieutenant Commander and later Senator Sam Stratton, and Lieutenant Commander James Stavridis. The winners of the 2020 contest are: Captain Sam Tangredi, U.S. Navy (Retired),  Lieutenant Commander Evan Karlik, U.S. Navy, and Chief Petty Officer Phillip Null, U.S. Coast Guard. All three essays appear in this issue, beginning on page 20. Captain Tangredi is a repeat winner of this contest, and Chief Null has placed in several other Naval Institute essay contests in the past few years.

I am also pleased to announce the winners of our first-ever Diversity and Inclusion Essay Contest, sponsored by Raytheon Technologies. Ensign Sydney Frankenberg, U.S. Navy, took the first prize of $5,000 with “Sir, No Excuse, Sir!” Marine Corps Major Rafiel Warfield took second prize and $2,500, and Lieutenant Dusty McKinney, U.S. Navy, won third prize and $1,500. We received more than 120 essays in this contest—an incredible showing in the first year of a contest. 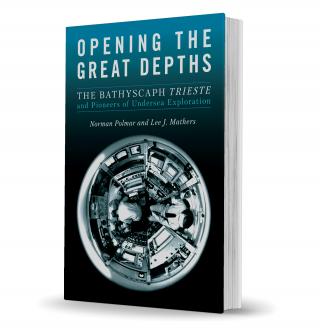 The Press’s latest book is Opening the Great Depths: The Bathyscaph Trieste and Pioneers of Undersea Exploration, by Norman Polmar and Lee J. Mathers.

“This is an exceptional and essential book, offering an authoritative assessment of the craft and the people who pioneered exploration of and working in the last great frontier on this planet, the deep ocean.”

“Thirty years after the Cold War, much of the Navy’s submarine service’s huge contribution to victory is still quite secret. Even less known are the contributions of the scientists and explorers whose daring expeditions in the deepest seas made those Navy successes possible. Now the ideal co-authors are able tell those amazing true tales. Combining science and adventure, Polmar and Mathers have produced a real page-turner.”

—John Lehman, former Secretary of the Navy,
author of Oceans Ventured and Winning the Cold War at Sea

To order your copy go to www.usni.org/press/books/opening-great-depths.

Our first "page-to-stage" event for the American Sea Power Project will be on 22 April. We hope you'll join us!
P CEO Notes

The first "page-to-stage" event for the American Sea Power Project will be on 22 April. Mark your calendars now. More details to follow next month!
P CEO Notes

This issue goes to press as the nation comes to grips with the violent attack that breached the Capitol. Such actions cannot be condoned, and those responsible must be held ...