Every five years the British government conducts a Strategic Defense and Security Review (SDSR). The last one was published in 2015 when David Cameron was Prime Minister.

The United Kingdom’s 2020 SDSR is due to get underway later this year. In addition to defining the UK’s defense relationship with the European Union post Brexit, the UK government has stated that it will “launch a radical assessment of Britain’s role in the world.” Two of its goals are to provide an “Affordable Equipment Plan,” and for the “Services to remain an attractive career option for new and serving personnel alike.” A detailed examination of the many threats will be followed by how best to organize and equip the UK’s Armed Forces.

The 2020 SDSR provides an opportunity for the nation to embrace its maritime roots, reprioritize the Royal Navy and Marines, and strengthen the United Kingdom’s key alliances. Given the UK’s special relationship with the United States, based on the “Five Eyes” intelligence partnership—inaugurated by Winston Churchill and Franklin Roosevelt—and the enduring strong relationship between the Royal Navy and Marines and the U.S. Navy and Marine Corps, Americans should pay attention to what will transpire across the Atlantic.

In October 2019, the British Army had 73,400 personnel, about 10 percent under strength. The Royal Navy and Marines combined strength was 29,000, and the Royal Air Force 29,900. In 2018–19, the UK spent 38 billion pounds sterling on defense, more than fulfilling its 2 percent of GDP commitment to NATO. Based on current financial plans, approximately 40 percent of the UK defense budget will be spent on equipment over the next ten years. However, in 2018 the UK Audit Office made it clear that this plan was unaffordable.

There has been Parliamentary disagreement over defense procurement costs, particularly shipbuilding. The House of Commons Library provides detailed source material for all the above, particularly “A Brief Guide to Previous British Defense Reviews,” and “Brexit Reading List: Defense & Security.”

The sea must be the key element in Great Britain’s strategy going forward. The outcome of the 2020 SDSR will have not just a lasting impact for the foreseeable future on the size, shape, and disposition of the Royal Navy but also a significant impact on its closest allies, the U.S. Navy and Marine Corps. The SDSR should be framed by one key factor: the vital national interests of the UK and how they should be best protected for this generation and the next. Taxpayer pounds should be invested well through strategic objectives, with a top-down analysis to drive affordable force capabilities wisely, devolving to manpower requirements, systems and technologies—not interservice rivalries and chiefs-of-staff vying for single service vested interests. The latter is a recipe for strategic disaster and wasted resources.

The national strategic deterrent—the Royal Navy’s ballistic missile submarine force— safeguards against the ultimate existential threats, but beneath these Armageddon scenarios lie the key realistic conventional threats to the nation’s trade and economy, and therefore ultimate well being.

The lifeblood of the British economy flows on and through the oceans of the world.  Indeed, 90 percent of all global trade is by sea according to the U.N.’s International Maritime Organization. The UK has always been and will always be a maritime nation.

The Indo-Pacific region, the Persian Gulf, the complex politics of the Middle East, and the sovereignty of the key straits around the world shape the future. The sea is the lifeblood of the global economy, but it is also a means for piracy, the transport of illicit drugs, human trafficking, arms movements, and myriad terrorist-related activities.  The world’s oceans are a place for asymmetric, or gray zone, warfare. Russia and China have increasingly challenged the territorial seas of their neighbors and projected power and influence in ways that threaten free seas. The SDSR should seek to deter and counter those threats, strengthen international norms, and protect free seas.

The core alliance that has bound the United Kingdom and the United States since Winston Churchill’s critical meeting with Franklin Roosevelt on board HMS Prince of Wales off Newfoundland on 10 August 1941 remains strong today. That alliance brought about a strategy that would lead to the demise of the Nazi tyranny, create the Atlantic Charter, and exchange vital intelligence at Bletchley Park and Station Hypo in Hawaii. The United States and Great Britain remain the heart of the great alliance that includes Canada, Australia, and New Zealand. A strong, common maritime strategy should be a foundation to the future of the Five Eyes nations. The Royal Navy and the Royal Marines are Britain’s contribution to a grand allied maritime strategy—underpinned by extraordinarily capable Five Eyes intelligence. Make no mistake, neither China nor Russia enjoy alliances anything like the one that binds these five nations.

The interoperability of the Royal Navy and the U.S. Navy and Marine Corps is central to a winning maritime strategy. Common systems, such as the F-35 Joint Strike Fighter, Tomahawk cruise missiles, and Trident ballistic missiles, make our navies more lethal. The extensive training that our forces conduct together—U.S. Navy ships participating in the Royal Navy’s flag-officer sea training (FOST) and Royal Navy ships participating in U.S. composite training unit exercises (CompTuEx)—makes them interoperable. The long-term relationship of the UK and U.S. nuclear-powered submarine forces is another example of how we are stronger together.

These navies are forward deployed, persistently present, and the critical deterrent to those who will seek to challenge the world order. It is on the sea and from the sea that the United Kingdom with its key allies can help maintain the international order and protect its vital national interests.

HMS Queen Elizabeth, the first of the Royal Navy’s two 65,000-ton aircraft carriers, is scheduled for its first operational deployment in 2021. It will carry F-35B squadrons of the Royal Navy, Royal Air Force, and the U.S. Marine Corps squadron—VMFA-211. At the Atlantic Future Forum held at Annapolis last fall, the British First Sea Lord and Chief of Naval Staff, Admiral Tony Radakin, made this resounding statement on board the ship, at anchor in the Chesapeake Bay: “Queen Elizabeth has demonstrated already that we can successfully field a combined US-UK carrier strike group, and I look forward to this developing further, getting to the point where we are not only talking about interoperability, but we are looking for interchangeability.”

A 2021 deployment of an HMS Queen Elizabeth battle group into the Indo-Pacific region in concert with the U.S. Seventh Fleet and other allies will demonstrate the intention of Washington and London to maintain international order in keeping with the principles and mandates of the United Nations Charter, with strength through deterrence and forward-deployed persistent presence.

If a top-down analysis of the UK’s vital national interests predicates a maritime strategy, then funding the equipment for implementation will be critical. A maritime strategy that dovetails with that of the United States will require the UK to sustain its two aircraft carriers, build additional Astute-class attack submarines, more destroyers and frigates, and amphibious lift and sea-based transport and logistics for the Royal Marines and the Army.

The UK’s mobile and capable Special Forces and other key Army mobile units such as the Parachute Regiment and quick-reaction regiments should be integrated with the Royal Marines into a new force that is responsive via sea-based transport and logistics. The Royal Marines should be expanded and the SBS become totally interoperable with the SAS and U.S. Special Forces.

The 2020 SDSR must address the global threat realities, the rapidly changing nature of warfare, and provide key capabilities to deter the growing adversary capabilities of China and Russia. It must deal decisively with those nations that provide the means to third party adversaries and surrogates via weapons transfers, training, and covert operations. In this unsettled world, the UK and the United States need a grand maritime strategy, underpinned by the warfighting capabilities described here and the training and resilience of their fine fighting men and women. Those who care deeply about these issues are encouraged to lend support to this strategy by all means at their disposal. At the diplomatic-military levels the time is right for U.S. officials to encourage change in the UK. We are, together as critical allies, in a “Maritime Century” that demands bold vision, a tightly bonded alliance, and real interoperability. 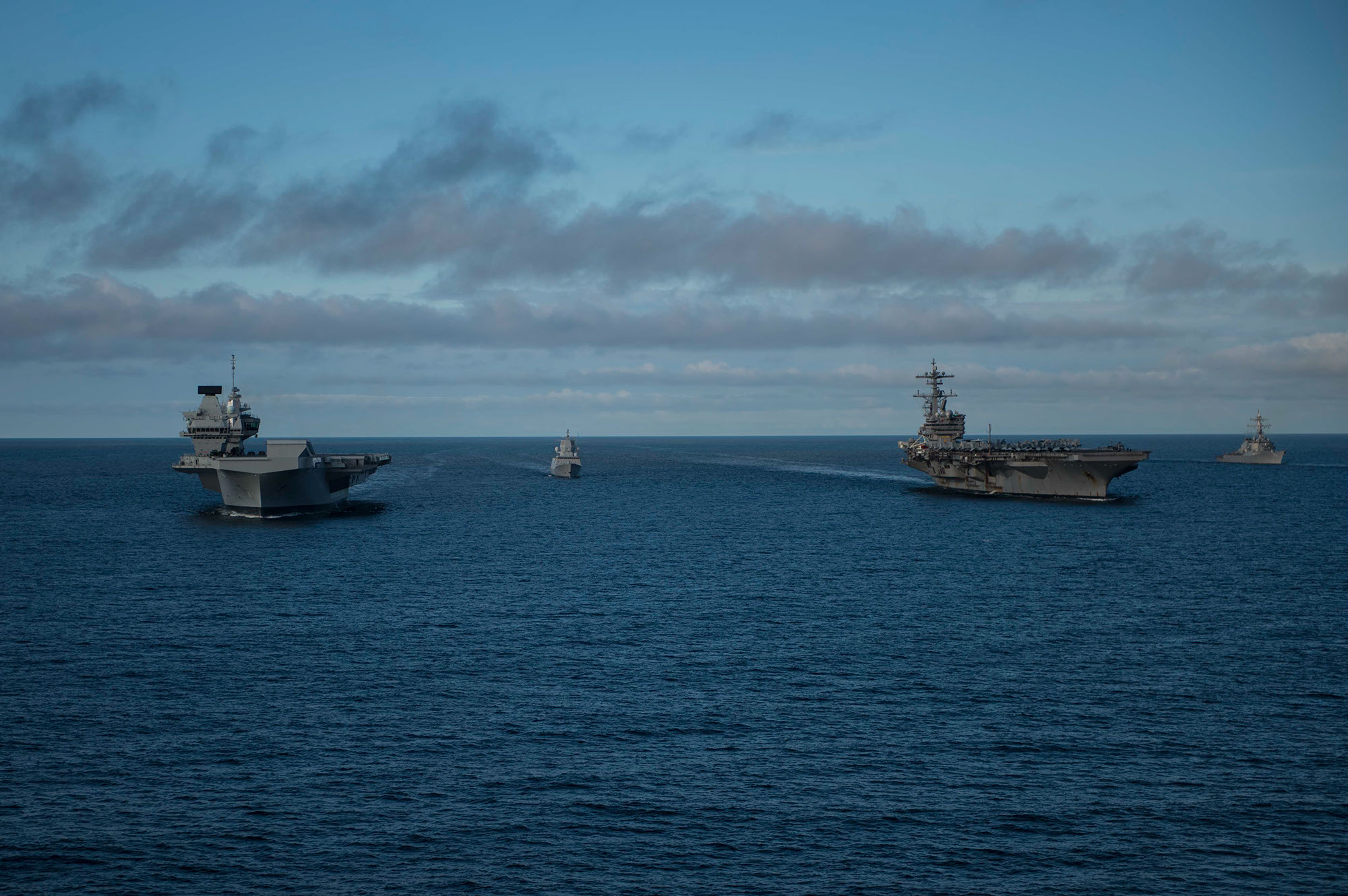 Dr. Anthony Wells is a 50-year veteran of the Five Eyes intelligence community, a King’s College, London War Studies PhD, and has served uniquely with both British and U.S. intelligence services and armed forces. He was trained and educated in the 1960s by those who had the vision to defeat the Nazi scourge and then take on successfully the Soviet Union and its Warsaw Pact allies. He lives in Virginia.