Protect the Force from the Novel Coronavirus

Keeping the U.S. military safe from the Coronavirus pandemic will require deliberate planning, prevention, and response.

The Threat (Why We are Concerned)

Since initial reports in December 2019 of an outbreak of severe respiratory illnesses due to a novel coronavirus (Severe Acute Respiratory Syndrome Coronavirus-2, or SARS-CoV-2) in Wuhan, Peoples Republic of China (PRC), the disease (COVID-19) has spread rapidly across the globe. As of 9 March, there had been 118,326 laboratory-confirmed cases of COVID-19 worldwide, with 4,627 deaths affecting 114 countries (see Table 1). Most of these have occurred in Hubei Province, PRC. Since the first SARS-CoV-2 case in the United States was reported on 23 January, that number has grown to 938 in 39 states.

Many initial cases outside China were in individuals with direct connections through travel to China. However, in more than half the countries now affected, no link to China has been found, and local transmission has been confirmed or assumed. The rapid spread to multiple countries on multiple continents of a novel microorganism capable of human-to-human transmission prompted the World Health Organization (WHO) to declare a global pandemic on 11 March.

Coronaviruses are a group of RNA viruses that cause disease in mammals and birds. SARS-CoV-2 is one of seven that cause disease in humans. Most human coronavirus infections cause mild respiratory tract symptoms or no symptoms at all (i.e., sub-clinical). Infection by SARS-CoV-2 and 2 other coronaviruses (Severe Acute Respiratory Syndrome (SARS) and Middle East Respiratory Syndrome (MERS) viruses) may, however, cause severe respiratory disease and even death, with high case fatality rates (see Table 2).

Sneezing and coughing generate aerosols and droplets that are the primary means of spreading coronaviruses. Coronaviruses appear to survive on environmental surfaces for a week or longer, where they may be spread through secondary contact with contaminated surfaces. Initial symptoms of a non-productive cough, fever, and shortness of breath appear 2-14 days (average 5.1) after exposure, although asymptomatic but infected individuals also may carry and shed significant amounts of virus, unwittingly spreading the disease. Coronavirus outbreaks tend to occur primarily in the winter and early spring. COVID-19 has been detected in asymptomatic domesticated animals (dogs) but it is unknown whether this represents a method of spread to humans.

With no vaccines or antiviral medications currently available against SARS-CoV-2, treatment is primarily supportive. Protection and prevention strategies almost exclusively rely on non-pharmaceutical public health interventions, including case containment, quarantine, and social distancing. These interventions have been successful in slowing the spread of disease, but eventually all countries will likely be affected.

U.S. Government Response to COVID-19 (What is Being Done)

In anticipation of future influenza or other pandemics, the U.S. Government developed the National Pandemic Influenza Plan in 2005, and charged federal agencies and individual states, territories, and tribal nations to develop subordinate plans aligned with it. Public health agencies and hospitals were provided grants to develop their own plans to address such issues as supply chain management, surge capabilities, disaster standards of care, and other concerns. Portions of the Plan were tested during the 2009–2010 swine flu (H1N1) pandemic. Modifying this Plan for the current coronavirus epidemic requires only minor adjustments.

The U.S. Government was concerned about COVID-19 well before the WHO declared a Public Health Emergency of International Concern (PHEIC) on 30 January. In late January, the Administration considered instituting travel restrictions from China. Travel restrictions and quarantine requirements were implemented on 7 February. On 4 February, the Secretary of of Health and Human Services Alex Azar declared a public health emergency, thereby activating the National Pandemic Influenza Plan. He exercised Emergency Use Authorization (EUA) powers to allow distribution of 200 CDC-originated SARS-CoV-2 test kits, circumventing routine approval by the Food and Drug Administration (FDA). At that time, most of those infected or quarantined were identified prior to return to the United States and were sequestered from further contact with the general public. Researchers have recently opined that some infected but asymptomatic individuals may have arrived prior to travel restrictions, and have estimated that, as of 5 March, there were 1,000-10,000 such individuals present in the United States.

As new cases continue to appear, the ability to contain the outbreak becomes less likely. Although containment efforts will continue, federal, state, and local governments are now considering or transitioning to mitigation efforts, which are implemented primarily to further slow the spread of disease (so-called “flattening of the epidemiological curve”), thus reducing the strain on health systems struggling to identify, isolate, and treat affected populations.

Impact on the Department of Defense

DoD priorities during this global public health crisis are to:

The ability to maintain these latter two capabilities is inextricably dependent on the effectiveness of force health protection measures.

Actions Commanders Can Take to Protect Their Personnel

COVID-19 most severely affects the elderly or those having comorbid diseases, such as chronic cardiovascular or pulmonary disease, diabetes, or immunocompromising conditions. Because 90 percent of the U.S. military is younger than 40 years of age, and very few have significant comorbidities, only a small fraction should be adversely affected by SARS-CoV-2. A greater risk exists among beneficiaries and civilians who may have underlying conditions. Among the general population, the disease is mild or asymptomatic in more than 85 percent of cases, serious illness occurs in less than 5 percent, and overall mortality rate in those under 50 is 0.2 percent or less—similar to seasonal influenza.

The threat to the force is also not uniform geographically or temporally. Pandemics spread in waves and do not respect geopolitical lines. The Centers for Disease Control and Prevention (CDC) reports cases at the state level. Eighty-five percent of the U.S. population resides in 392 metropolitan statistical areas (MSAs) ranging in size from 55,000 to 20 million. These high population density nodes are separated by more sparsely populated territories. It could be expected that outbreaks would be at different levels at different MSAs, even in the same region or state. As military commanders assess the current threat level and consider implementing various interventions, attention to disease incidence in nearby MSAs may result in more refined interventions.

Mitigation interventions may also be required, depending on local conditions and essential mission requirements. Careful consideration should be given to logistical support requirements or unintended consequences of these interventions, which include:

At this time, it is impossible to predict whether the virus will abate as warmer weather arrives in the Northern Hemisphere. Commanders at all levels must take appropriate actions to ensure continued essential mission effectiveness. Well-considered and measured force health protection interventions, informed by science but balanced against essential mission requirements, will slow the magnitude and spread of the outbreak. Deliberate planning and identifying triggers to implement mitigation strategies will go far in achieving this goal, for the current coronavirus and future pandemics.

The views expressed in this article are those of the authors and do not reflect the official policy or position of the Defense Threat Reduction Agency, Department of Defense, or the U.S. Government.

[Editor's Note] During an interview on the Proceedings Podcast, Dr. Mothershead mentioned this Johns-Hopkins website as a particularly good source of information on the coronavirus pandemic.

Protect the Force from the Novel Coronavirus.pdf18.56 MB 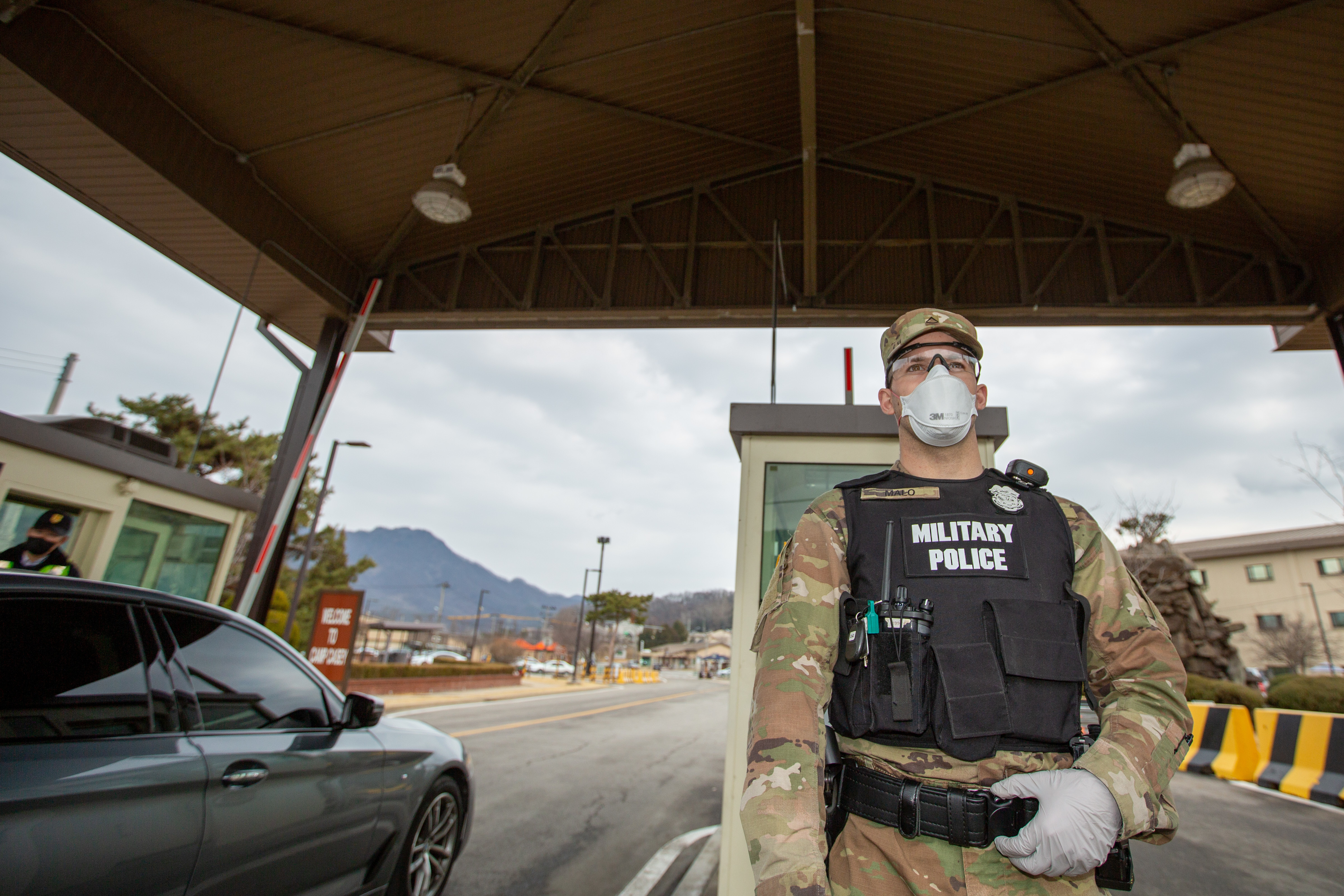 Jerry L. Mothershead, MD, FACEP, is a retired emergency medicine physician, flight surgeon, and naval flight officer, with 32 years active duty service in operational, clinical and administrative positions. His last assignment was as Special Projects Officer for CBRN Medical Defense at the Navy and Marine Corps Public Health Center, with concurrent designation as the Navy Medicine Specialty Leader for both emergency medical services and Homeland Defense. He is also an adjunct assistant professor of military and emergency medicine at the Uniformed Services University of the Health Sciences and has written more than 50 articles and book chapters on public health and medical preparedness. Since retirement, he has supported the Department of Defense and other federal agencies in worldwide initiatives focusing on public health and medical defense against disasters, pandemics, and CBRN events. He currently supports the Technical Reachback Group at the Defense Threat Reduction Agency through ARA Corporation.

Zygmunt F. Dembek, PhD, MS, MPH, LHD (Hon), an epidemiologist and biochemist, is an associate professor of military and emergency medicine at the Uniformed Services University of the Health Sciences and has written more than 100 articles and book chapters relevant to public health preparedness. He served in the U.S. Army and Army Reserve, holding ranks from private through colonel, and was Director of Education and Training at the U.S. Army Medical Research Institute of Infectious Diseases. He currently is a senior scientist with Battelle Memorial Institute, and supports the Technical Reachback Group at the Defense Threat Reduction Agency and other federal clients.

Dr. Aiguo Wu serves as the medical lead for the Technical Reachback Group at the Defense Threat Reduction Agency. Dr. Wu leads a group of scientific and clinical subject matter experts that provides technical consultation and modeling support for Combatant Commands (CoCoMs) and federal agencies. He has co-authored more than 50 peer-reviewed publications and articles related to his biomedical accomplishments. Dr. Wu holds both a medical degree and a doctorate degree in experimental hematology.