Skip to main content
The Arleigh Burke–class guided-missile destroyer USS Wayne E. Meyer (DDG-108) sails into Joint Base Pearl Harbor-Hickam, Hawaii. Since 2011, there have been 63 instances where Navy ships had to enter or leave Pearl Harbor with equipment casualties that limited their ability to maneuver.
U.S. Navy (Charles Oki)

Principles and Advice for Casualty Maneuvering

Restricted-waters transits with equipment casualties are complex and surprisingly common shiphandling evolutions. From 2011 to 2020, there were 63 such transits in Pearl Harbor, Hawaii, including 40 with Arleigh Burke–class destroyers and 10 with Ticonderoga-class cruisers.1 In 2015 alone, there were 12 transits where Arleigh Burke–class destroyers returned to port in Pearl Harbor with one of two shafts locked because of engineering casualties.

With years of shiphandling experience and after consulting with other current and former commanding officers and harbor pilots, I offer the following considerations and advice for maneuvering a dual-shaft ship in nonstandard engineering configurations, such as locked or trailing shaft. While most apply specifically to the Arleigh Burke class, several principles apply to other classes as well.

Locked-shaft maneuvering: Locking a shaft may be necessary for a variety of reasons, including main reduction gear (MRG), controllable reversible pitch propeller (CRP), and shafting casualties. The locked-shaft configuration is achieved by engaging the MRG turning gear and applying the shaft lock, which secures the drive train. The desired effect is to prevent the shaft and MRG from turning.

A well-trained crew can transition from two shafts under power, to trailing one shaft, and then to a locked shaft in relatively short order. This is achieved by slowing to a stop (desirable but not mandatory, depending on operational necessity), placing port or starboard engine offline, setting the pitch to zero thrust—which slows and stops the trail shaft RPM—and locking the shaft once rotation has stopped.2 Engaging “brake mode” from the Central Control Station accelerates these functions by simultaneously placing the engines to idle, engaging the power turbine brake, and setting ordered pitch to zero to quickly stop the shaft. The maximum recommended speed with a locked shaft on a DDG is 12 knots.

Maneuvering an Arleigh Burke with one shaft locked brings a unique set of shiphandling challenges. The static propeller on the locked shaft acts as a large brake, or dragging force, which imposes twist in the direction of the locked shaft. In addition, the effects of sternwalk—also called “side force”—from the single-powered shaft rotating outward accentuates the turn.3 For example, with the port shaft under power and starboard shaft locked, the ship will naturally turn to starboard when making way as a result of drag and sternwalk. To maintain heading, opposing rudder must be used. Depending on speed and other factors, such as wind and current, the amount of opposing rudder necessary to maintain heading will vary. For an Arleigh Burke at 10 knots, typically between 10 and 15 degrees of rudder in the direction opposite the locked shaft is necessary to maintain heading. 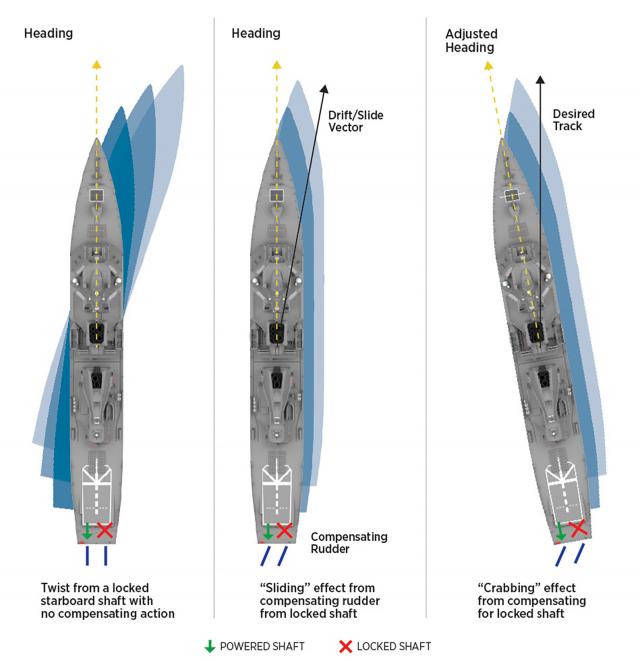 The specific drift angle is a function of ordered speed, sternwalk, rudder angle, and current.4 While subtle compared with larger factors of winds and tides, the drift angle and vector can appreciably “slide” a ship off track. A drift angle of 3 degrees has been consistently observed as a result of using 10–15 degrees rudder to countermand a locked shaft when operating at 10 knots. In the example noted above, with the starboard shaft locked, steering a few degrees left of desired heading will generally keep the ship on track. This dynamic is similar to a “crabbing” effect, which can confuse the bridge team as the ship’s heading and direction of travel will be different (see Figure 1).

Turning dynamics, such as advance and transfer, are dramatically different with a locked shaft. Turns in the direction of the locked shaft are significantly more responsive than turns away from it, and large turns away may not be possible without assistance from tugs or must be executed early, with little room for error. Large turns toward the locked shaft can have the effect of turning too soon, which also can be problematic.

Trail-shaft maneuvering: In the trail-shaft configuration, one shaft provides propulsion and the other is “freewheeling,” with maximum pitch extended, allowing hydrodynamic flow to rotate the shaft as it is pulled through the water. Trail shaft minimizes drag through the water and is widely used at sea for fuel economy. Because there is still some drag associated with pulling the trailing shaft through the water, as well as sternwalk created by the outboard rotation of the powered shaft, a small amount of counteracting rudder is necessary to maintain heading. When turning with a trailing shaft, the ship will respond faster in directions toward the trail and more slowly when turning away from it. However, these effects are much less pronounced compared with locked-shaft turns.

An Arleigh Burke is far easier to handle with a trailing shaft than a locked one, although sternway should be avoided because of the potential to damage the main reduction gear by reverse rotation. However, the complexity of transitioning from trail to locked shaft in restricted waters, as well as the significantly different turning dynamics, make the locked-shaft configuration an appropriate fallback condition for a crew that is not well trained. Even in situations where sternway is not expected, if an emergency arises that necessitates backing or increases the chances of backing, such as emergency anchoring, having the shaft already locked avoids the risk of damage to the reduction gear. Regardless of configuration, turning dynamics for each should be well understood and factored into the voyage plan.

Measure: Whenever possible, seek to understand the specific maneuvering effects of an uncommon engineering configuration. For example, a stopwatch can be used to measure the difference in system response speed when operating in manual versus programmed control modes. If you experience a delay in response to engine orders between port and starboard shafts, knowing how each shaft responds when doing pierwork is critical.

Today, the maneuvering effects of nonstandard engineering configurations are observable using the Voyage Management System (VMS). A ship that experiences a propulsion plant casualty at sea can rehearse turns in various configurations and use the VMS plot to measure the differences in effects—such as turn diameter, rate of turn, and advance and transfer—and debrief the results with a high level of fidelity. Revised advance and transfer locked- or trail-shaft computations may then be applied more precisely to restricted-waters transit plans. Knowing your individual ship is important, as even units of the same class will have slight variance in propulsion, machinery control, and steering systems.

Rehearse: Consider rehearsing restricted-waters transits by plotting and executing a representative track in the open ocean. Rehearsal will help validate advance and transfer timing assumptions based on your specific equipment configuration or casualty. While there will be differences between the forces affecting the ship at sea and those entering port, understanding how the rate of turn changes at different speeds is useful. Using the same watch team for rehearsal that will conduct the transit for particularly dangerous evolutions or unfamiliar foreign ports is advised, so the team can become more familiar with the specific factors, actions, communications, and context than would be achieved solely through pre-evolution briefings.

Engage a harbor pilot: A commanding officer should have at hand the phone numbers of at least one harbor pilot to connect with when faced with a challenging situation. Chances are good that the harbor pilot will have sage advice to offer, either for returning to home port or operating safely in a foreign one. Discuss the findings from your rehearsals at sea, have tugs meet you earlier in the transit, and take standard precautions for anchoring.

Training at sea: Locked-shaft, trail-shaft, and nonstandard configurations are routinely practiced at sea. However, operating in these modes for sustained periods, or during special evolutions such as restricted-waters transits, is not. Practice maneuvering at sea with each watch team in various configurations or with controls in the engine rooms to flex a variety of configurations. Include classroom bridge-team training sessions on maneuvering after a casualty and discuss how the resulting forces affect maneuvering in restricted waters to add texture and relevance to underway training. Include these procedures in your sea-and-anchor and underway replenishment briefs. Casualty maneuvering situations also should be added to special-evolutions training and dedicated naval seamanship and shiphandling training simulator classes to get conning officers comfortable with such situations.

Even the most astute commanding officer cannot prepare his or her team for every circumstance or casualty. However, including nonstandard configurations in unit-level training, measuring performance, rehearsing, engaging the experts, and training at sea and in simulation will help bridge teams return to port safely—or stay in the fight at sea.

Captain Heames is a career surface warfare officer who has served on frigates, destroyers, cruisers, and aircraft carriers. He commanded the USS Preble (DDG-88) and is currently commander,

Helicopter Aircrewmen and Chronic Back Pain

By Chief Petty Officer Shamus McManaman
The Navy took an important step in addressing chronic back pain in helicopter aircrewmen with more ergonomically friendly gunner seats in the MH-60S Seahawk. But more needs to be done.
P Professional Notes

By Commander Thomas T. Dixon, U.S. Navy
A wargame is an excellent tool for predeployment training, as it forces the wardroom to develop a fundamental understanding of U.S. and rival capabilities and doctrine.